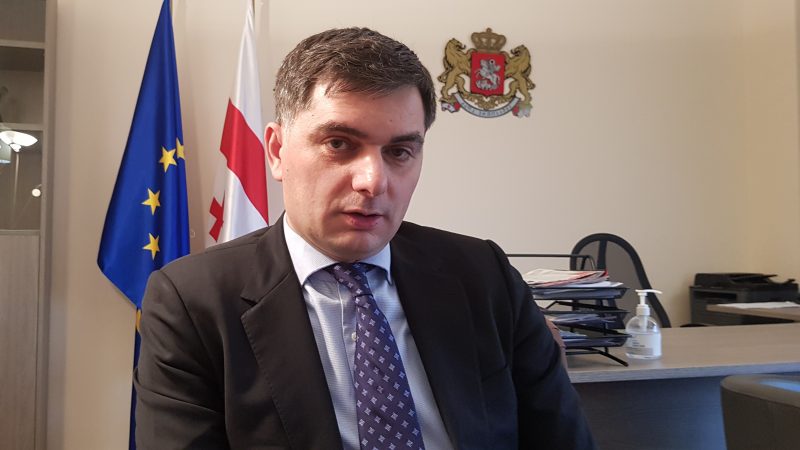 Vakhtang Makharoblishvili, Georgia’s Ambassador to the EU, in his office in Brussels, on 13 December 2021. [Georgi Gotev]

In an exclusive interview, Georgia’s ambassador to the EU, Vakhtang Makharoblishvili, discussed his country’s political situation and EU agenda, the upcoming Eastern Partnership summit on 15 December, and the ambitious format of the ‘Associated Trio’.

Vakhtang Makharoblishvili took over recently as Georgia’s representative to the EU and ambassador to Belgium and Luxembourg. Before that, he was Georgia’s first deputy minister of foreign affairs.

Can you give us a flavour of the diplomatic activity between Georgia and the EU, and more specifically ahead of the Eastern Partnership summit?

I took this position only a couple of months ago, but I’ve been fortunate not being new to the topics. Because today the diversity of EU-Georgia cooperation is very intense and I would say full. Our overarching goal is to prepare for 2024. As you know, following an appeal by the society in Georgia, the government made the pledge to file the application for EU membership in 2024. Our job is to make sure that we prepare ourselves to the greatest extent.

The Association agreement certainly will remain the backbone of Georgia’s EU integration process. In that sense, we will strive that its implementation goes at a faster pace. And I would certainly underscore the importance of the societal approach. According to our estimates and of our EU colleagues, we have brought some 30-35% of EU acquis into Georgian legislation. But we are entering the phases in which some of the reforms are painful, especially for the private sector. It is extremely important that the political establishment, despite the polarisation in Georgia, consolidates under the goal of EU integration.

What you say reflects the general impression in Brussels that Georgia is a very pro-European and ambitious country, but you still have your internal problems. European Council President Charles Michel was involved in an unusual mediation effort, and the process is not over yet. What could we expect?

Sometimes I hear in Brussels that the engagement of the Council president was not successful, but I would totally disagree. He came to Georgia at a very crucial time, it was right after the war between our neighbours [Azerbaijan and Armenia, over Nagorno-Karabakh], and certainly, this visit was an important message for the region. But it was also extremely important for Georgia. Right before his arrival, we had a protracted boycott of Parliament from a majority of political parties. After his visit, the political life went back where it should be – in Parliament. He made it possible. Also, the agreement between the political forces which he helped to be signed was also largely successful. The majority of the points of this agreement are either implemented or are in the pipeline, I’m referring to the electoral code, the release of some of the prisoners, the amendments to the Constitution when it comes to the electoral thresholds.

The power-sharing exercise has not been achieved yet, but the readiness to do that is certainly there. Maybe the local elections hindered the execution of this point, but it will probably be implemented in the coming months. There is also a point about judicial reform, and there have been some interpretations as to the level of implementation, but certainly, the process is ongoing. What is important is to have inclusive participation, and I hope that this chapter will also be closed in a positive manner.

The major goal of this agreement was to lower polarisation. In that sense, it did not deliver what we expected. Despite the back and forth, the reform agenda stayed. And the intensity of EU-Georgia relations has been maintained and we have been able to take advantage of new opportunities: I will mention the signature of agreements under Creative Europe and Horizon Europe, the latter with a total budget of €95 billion.

Your Prime Minister Irakli Garibashvili is coming for the Eastern Partnership summit. What do you expect from this event?

This summit is very important. The last one we had was in 2017. We had a leaders’ meeting in 2020, but we didn’t have a physical gathering with a summit declaration since 2017. It is important to take stock of the challenges, the opportunities, but also to look forward. In our perspective the summit declaration and the summit itself should be forward-looking, it should be visionary.

For the Eastern Partnership to be attractive to everybody it is important that principles like differentiation, like more-for-more, are kept on board. In this context, the Associated Trio element that has been very organically developing in recent months is very natural. These are three countries with Associated agreements, including DCFTAs [Georgia, Moldova and Ukraine], and there is so much in these documents that requires more intense dialogue with the EU. We are glad we already had ministerial meetings under the DCFTA, but we are certainly looking forward to identifying new sectors. And the recent visit to Brussels of the three prime ministers who met the presidents of the three EU institutions gave a good opportunity to discuss these new sectors, new areas. And the three countries going forward should not be to the detriment of anyone. Our three countries are multipliers. Our success will be a decisive factor regarding decisions to be made concerning others.

Are you satisfied with the possibility of EaP countries being involved in the drafting of the summit declaration?

It’s an interesting and difficult question. For us, what we have been saying from the beginning was the need to share the draft document as soon as possible, but it was not shared very soon. I understand it’s not an easy process within the EU because all member states need to agree to the draft before it is shared with partners. But we also wanted to avoid the take-it-or-leave-it scenario. And now we are in a situation when we have two days, and the document is still not agreed. My position is that we should always have more time for discussions. Honestly, we are not there yet.

What would you like to see in the document?

For us it is important to demonstrate that things have developed since 2017, we need new elements.

Would you like a security element to be added? Or other elements?

Yes, I understand that the EU is not very much into the security dimension, at least until now, but having so many security challenges in the region, we expect and would like to see some elements of security in the document. The EU is a big supporter of our territorial integrity within our internationally recognized borders, the EU is part of the engagement process with the people living in the occupied territories of Georgia, so yes, we expect such a commitment. And we certainly expect a discussion on security. Because this is a summit of the European continent, the EU with its Eastern European neighbours, we are the regions which are interested in a strong, unanimous, and united Europe.

And this should be a good opportunity to discuss our challenges, starting with Covid-19, with economic recovery, but also the security challenges and hybrid challenges. The Black Sea is a European sea. We strongly believe that the Black Sea should not be a region of confrontations, but rather a sea of development, prosperity and connectivity. I think connectivity is a very important topic for the summit, but not only. For Georgia, it’s one of the top priorities because we don’t have a physical border with the EU, and shrinking the physical distance through the exploitation of the Black Sea potential is something that we are very much looking forward to, be it ferryboat connections, energy routes, digital connectivity. And the new Investment Plan for Europe is very important in that sense. It’s not a surprise if three out of five flagship projects we are discussing with the EU under the Investment plan are directly connected with infrastructure connectivity.