Minister of Foreign Affairs of the EU, attend the family photo on the sidelines of the informal talks between the EU Foreign Ministers and their EU counterparts, in Berlin, Germany, 28 August 2020. [EPA-EFE/Kay Nietfeld]

According to the political agreement, the future measures on Belarus are meant to mainly target those accused of being responsible for the fraudulent elections and the violent crackdown on peaceful protests, EU chief diplomat Josep Borrell told reporters in Berlin after the meeting.

“Belarus should not become a second Ukraine,” he added.

The EU is currently considering travel bans and asset freezes on up to 20 people responsible for a crackdown on demonstrators two weeks after an election they say was rigged.

“There is no number yet, but it could be something beyond 20,” a senior EU official told reporters after the meeting.

Brussels already has an arms embargo on Belarus but in 2015, in a bid to improve ties with Lukashenko, the bloc eased economic sanctions that had been in place in 2004.

Asked by EURACTIV whether Lukashenko himself will be on the list, Borrell did not directly reply and said he would “not be in a condition to give the precise number or the precise names”.

“For sure they will include high-level officials, but it will depend on the evolution of the situation,” he added.

Opponents of such a move fear that this could complicate diplomatic efforts to resolve the conflict and deprive the EU of the opportunity to tighten its course again, if necessary.

The decision had been overshadowed by a dispute over the EU’s sanctions policy.

“That has something to do with the EU’s credibility,” Lithuania’s foreign minister Linas Linkevičius said ahead of the talks, describing plans to sanction only 15 to 20 people in the first step as “too symbolic”.

“This is definitely not enough. It is not a serious reaction.”

The eleventh-hour agreement came after Thursday’s four-hour discussion focused solely on the situation in Belarus, where thousands of protesters have been demanding new elections since mid-August.

The meeting reached no tangible conclusion as some member states attempted to link Belarus with the EU’s diplomatic response to Turkey.

Two EU diplomats confirmed to EURACTIV after the first round of talks on Thursday that conclusions on Belarus had been blocked, which is why the discussion was postponed for Friday morning. 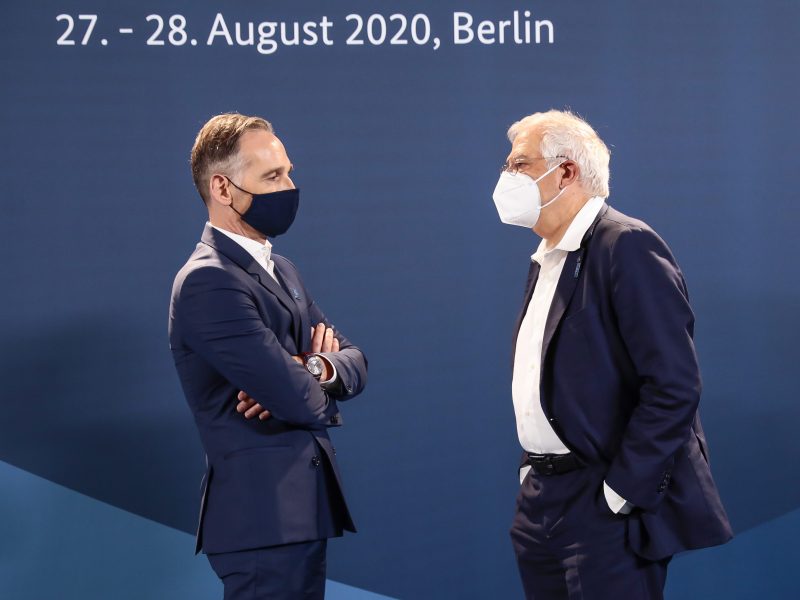 The concerned member states said they understood the need to impose sanctions due to the violations of human rights in Belarus but stressed that the EU values should “apply everywhere equally”.

Cyprus indirectly threatened to veto the Belarus sanctions unless the EU’s pressure on Turkey in the natural gas dispute was increased.

“We do not want there to be double standards,” Cypriot Foreign Minister Nikos Christodoulidis when asked whether his country would agree to Belarus sanctions without new sanctions on Turkey.

Lukashenko threatens to fight back

The same day in Minsk, Lukashenko threatened to retaliate with reciprocal measures should any sanctions be imposed against his country.

Speaking during a dairy factory visit in the country’s east, Lukashenko threatened to cut off transit routes through the country and boycott Lithuanian ports if sanctions were put in place.

“I’ve instructed the government to submit a proposal on reorienting all trade flows from Lithuanian ports to other ones,” Belta state news agency quoted Lukashenko as saying. “Let’s see how they live with that.”

He also ordered half of the country’s army to enter combat readiness in response to what he said were threats from the West, Belta reported.

“(NATO has) launched exercises right by our borders. What am I supposed to do? I also rolled out some divisions, put half the army into combat readiness mode. That’s not cheap,” Lukashenko was quoted as saying

Back in Berlin, German Chancellor Angela Merkel told reporters she had tried to speak to Lukashenko by phone but he had declined.

Speaking of a reserve police force which Russian President Vladimir Putin said had been created on Lukashenko’s request, she said: “I hope that such troops are not deployed.”