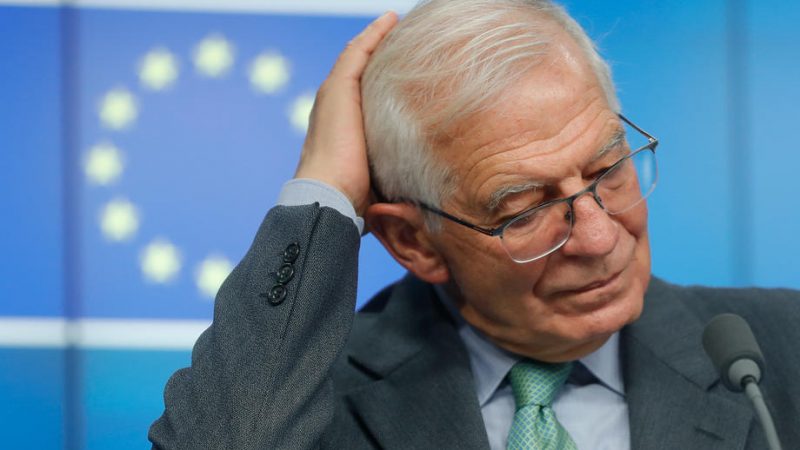 EU top diplomat Josep Borrell on Monday criticised EU member states for failing to agree on sanctions against those suspected of war crimes in Ethiopia’s civil war, as he expressed frustration at the bloc’s failure to give an effective policy response to "large scale human rights violations". [EPA-EFE/STEPHANIE LECOCQ]

Despite proclamations of “strong commitment” to Eastern partners, the EU’s reluctance to fast-track integration for its most ambitious next-door neighbours is causing increasing frustration as top diplomats met in Brussels on Monday (15 November) to chart the policy’s future.

EU top diplomats and foreign affairs ministers met with their counterparts from the Eastern partnership (EaP), the EU’s policy towards its eastern neighbours Armenia, Azerbaijan, Georgia, and Moldova and Ukraine ahead of a leaders’ EaP summit set for 15 December.

The meeting, meant to lay ground for the political approval for future goals of the policy next month, was supposed to show the EU’s “strong commitment to the Eastern Partnership”, as one senior bloc official put it ahead of the ministerial.

Pressed by journalists on whether the policy is dying, EU top diplomat Josep Borrell rejected the claims and said Brussels is “paying more and more attention to our Eastern neighbours”.

“For us, at that moment it is mainly the most important part of our foreign policy“, the Spaniard added.

The December summit will be the first physical meeting between EU and EaP chiefs since the outbreak of the pandemic and the first official summit between the bloc and its eastern neighbours since 2017.

Yet, EURACTIV has learnt that the preparations for the joint EU-EaP declaration are rubbing some the wrong way.

Producing a joint political declaration is especially politically sensitive after a 2019 attempt at producing a stance signed by all participating countries failed. The celebratory document of the policy’s 10th anniversary was downgraded into a chairperson statement signed only by then-top EU diplomat Federica Mogherini.

Arriving at the meeting with his counterparts in Brussels on Monday, Romanian foreign affairs minister Bogdan Aurescu said it would be important to adopt a “very concrete, forward looking and visionary joint declaration” in a month’s time.

Aurescu also emphasised the importance of starting “a discussion on this joint declaration as soon as possible.”

One Eastern Partnership diplomat expressed frustration that no draft conclusions have so far been circulated.

They regretted that “this means there will be no discussion and we will be forced to accept what the EU has put on paper”.

Georgia, Moldova, Ukraine, all three countries hoping to one join the EU, have recently banded together to speed up their integration into the bloc.

So far the initiative, self-ascribed as the “Associated Trio” after the association agreements signed by the three countries that deepened their trade and political ties with the EU, has received little support from the Commission, which has barely been able to publicly utter the term up until last summer.

This unease was reflected in Borrell’s answer to journalist questions ahead of the meeting about the Trio within the Eastern Partnership. “We are going to discuss with all of them together”, he said.

Arriving at the EU Council building on Monday, Ukrainian foreign minister Dmytro Kuleba said that one of the key expectations of Kyiv from the Eastern Partnership summit is “the recognition of the associated trio”.

The Trio is packed together within the Eastern Partnership (EaP) with arch foes over the disputed Nagorno-Karabakh region Armenia and Azerbaijan, neither of which have intentions of joining the bloc. Armenia is a member of the Eurasian Economic Union and has a defense agreement with Russia, while Azerbaijan has won last year’s Karabakh war with the decisive support of Turkey.

Deputy chief of division for Eastern Partnership region at the EU’s external service EEAS, Radoslaw Darski said “we are concerned with certain political developments, and lack of sufficient reform progress.”

Speaking at an online event ahead of the Monday ministerial, Darski added that “we cannot pretend we don’t see” that EU and EaP countries “all have different visions for the future of this partnership and their participation in this endeavour.”

“We welcome the trio initiative … but at the same time, we will always reiterate that maintaining inclusivity is equally important to secure the success of the partnership,” he added.

Support from the East

Newer member states in Central and Eastern Europe, as well as the Baltics, have been more open to the trio format.

Ahead of the meeting on Monday, Lithuanian foreign minister Gabrielius Landsbergis said his country sees the Trio as a “good way forward for the countries to build up more speed on their path towards European integration.”

“But then again, I think just the format, because we’re seeing some differences within the format, that is also to be noted,” he added.

EURACTIV understands that France, which has an influential Armenian diaspora, is unenthusiastic about the Associated Trio format as it wants to keep Armenia as close as the other countries in the bunch.

France will hold presidential elections in April-May 2022. The French administration takes good care not to give fodder to the far-right to attack Emmanuel Macron, who will undoubtedly run for reelection, as a promoter of further EU enlargement.

The UN estimates that France boasts 250,000 of Armenian population, but others put the number as high as 400,000, outmatched outside of the Caucasus only by Russia with 1.9 million and 850,000 in the United States.

One diplomat from the region confirmed that Paris was unlikely to back any ideas of a fast-track for the trio, precisely because of the sentiments of the Armenian diaspora.

The issue of Paris’ cold shoulder ’ blockade is particularly acute as France takes the six-month rotating presidency of the Council. The diplomat said Paris pays little attention to EaP in general and expressed doubts that the policy would change after the French elections.