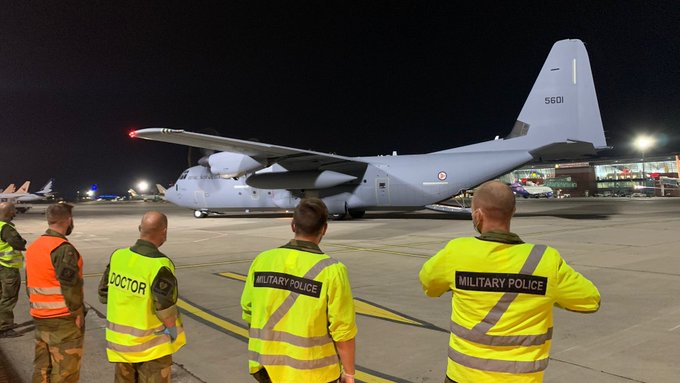 A plane lands in Oslo, Norway, carrying people who have been assisted in departing Kabul via Tbilisi, 24 August, 2021. [Ministry of Foreign Affairs of Norway, Twitter]

As the dust settled following the dramatic evacuation at Kabul airport, Georgia has received acknowledgement and praise for its role in providing critical assistance to the US and the Western partners.

According to information obtained by EURACTIV , during the evacuation since 14 August, three C-17 Globemaster III military transport aircrafts of the US Heavy Airlift Wing (HAW), operating as part of the Strategic Airlift Capability (SAC) program, had been deployed to Tbilisi International Airport. The aircrafts have been conducting regular flights on the route Tbilisi-Kabul-Tbilisi to evacuate military and civilian personnel from Afghanistan.

Up to 20 flights have been conducted from Kabul to Tbilisi and approximately 2,500 people have been evacuated. During these missions Georgia’s airspace and its territory was used as a transit route from Afghanistan.

Inside the airport in the Georgian capital, a special facility was reportedly designated by the Georgian side to allocate evacuated personnel before the departure to the NATO member states via charter flights.

The Georgian authorities say that they have provided evacuees with medical aid, food and other necessities, and allowed several NATO member states to deploy their military and civilian personnel to the airport in Tbilisi.

At the adjacent military base, Georgian Defence Forces installed the large multipurpose tents to host evacuees during the long delays before the departures.

The Georgian government said in a statement that the Norwegian Armed Forces have set up a “Transit Healthcare Unit” at Tbilisi airport to help with the evacuation of a Norwegian Military Hospital of Kabul.

This morning another plane landed at Oslo airport, carrying people who have been assisted in departing Kabul via Tbilisi. We appreciate the excellent cooperation with the Georgian authorities in facilitating these flights. @MFAgovge @SandAndresen pic.twitter.com/IV54O8j2oH

“We thank Georgia for its role in facilitating the evacuations of thousands of people from Kabul, including Afghans at risk and allied and partner citizens. The regional transit hub at Tbilisi International Airport is playing an important role. Georgia continues to be a key partner for NATO,” the alliance deputy spokesperson Piers Cazalet told EURACTIV on Monday (6 September).

The EU expressed its gratitude to Georgia on 28 August, with EU ambassador to Georgia Carl Hartzell tweeting: “Thank you Georgia for your strong support to the evacuation from Kabul which allowed EU member states to swiftly and safely transit via Tbilisi airport.”

The US is “enormously grateful “to Georgia and other countries for assisting in evacuation efforts from Afghanistan, US Under Secretary of State for Political Affairs Victoria Nuland said at a press briefing on 1 September.

Although it is only a candidate to join NATO, Georgia has had the largest per capita contribution in terms of military presence in the NATO contingent in Afghanistan. At the peak of the operation ISAF in 2012-2014, Georgia had up to 1,500 military personnel on the ground. As part of the Resolute Support Mission, Georgia had deployed 857 personnel under different Allied commands, being the single largest non-NATO provider of manpower.

The ambassador of Georgia to the EU Vakhtang Makharoblishvili told EURACTIV that it was his country’s “moral obligation to stand by our European and American Allies in those difficult times”.

He reminded that over the past several years, Georgia and the European Union have developed a very close security partnership, Georgia contributing to EU’s CSDP missions in Central African Republic and Mali.

“Developments in our neighborhood have impact on prosperity and stability in our countries. Georgia stands ready to continue active engagement and close cooperation with the EU to ensure security where needed and help conduct humanitarian missions in the future too. We thank our Friends in Europe and the United States for the kind words of appreciation and gratitude.”