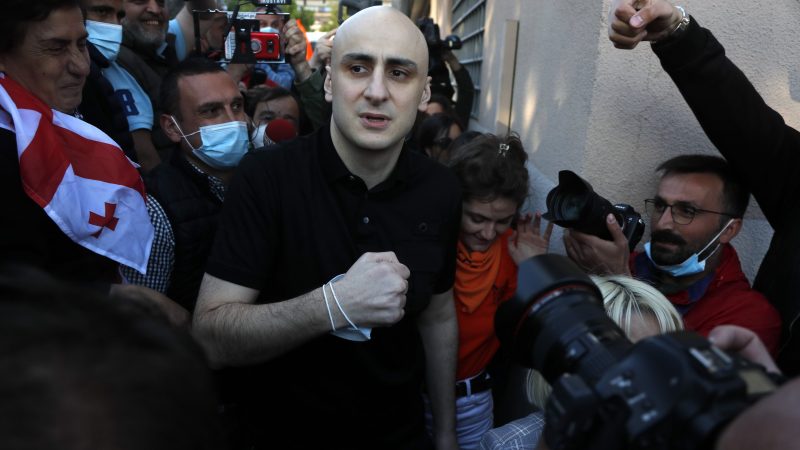 The country in Europe’s extreme southeast has been gripped by crisis since last October’s parliamentary polls, which the opposition denounced as rigged.

The release of Melia — the chairman of Georgia’s main opposition force, the United National Movement (UNM) — was part of an agreement the ruling Georgian Dream party and opposition leaders signed last month to end the crisis, under mediation from European Council President Charles Michel.

Waving Georgian and EU flags, hundreds of supporters greeted Melia as he left a penitentiary facility in the city of Rustavi, some 25 kilometres southeast of the capital Tbilisi.

“I want to wish liberation for all the political prisoners in Georgia,” Melia told the crowd.

“We are facing a ruthless opponent,” he said, referring to the ruling party. “Unfortunately, I am not the last political prisoner in Georgia.”

Melia’s lawyer Dito Sadzaglishvili told AFP earlier Monday that Melia’s release had been ordered by the Tbilisi city court after the EU agreed to pay his bail.

The EU had on Saturday posted bail worth $11,600 (€9,500) to allow for Melia’s release, describing it as “an important step taken to end the political crisis in Georgia”.

Melia, 41, was arrested in February in a violent police raid on his party headquarters, sparking mass protests.

His arrest followed a court order to place him in pre-trial detention after he refused to pay an increased bail fee ahead of hearings in a case related to anti-government demonstrations in 2019.

He has denounced the case as politically motivated.

Brussels and Washington led a chorus of international condemnation of Melia’s detention, as fears mounted in the West over Georgia’s perceived backsliding on commitments to democracy.

In power since 2012, Georgian Dream narrowly won the October parliamentary elections, with the opposition regularly staging mass protests in the months since to demand a fresh vote.

In March, Michel initiated inter-party talks that brought the Georgian government and several opposition parties to an agreement in April.

Under the pact, the ruling party pledged to resolve cases of “perceived politicised justice” through amnesties or similar measures within a week — the clause that concerns the criminal case against Melia.

Brussels also offered to post bail on Melia’s behalf to have him released from custody before the amnesty bill is passed.

The UNM had held out on joining April’s EU-mediated deal that was signed by the ruling party and most opposition parties, saying it would consider doing so only once Melia was released from custody.

The refusal by the UNM and another opposition party, European Georgia, to sign the agreement and to end their parliamentary boycott has left around 40 seats vacant in Georgia’s 150-member legislature.

Georgia’s exiled ex-president and the UNM’s founder, Mikheil Saakashvili, urged his party to sign the agreement despite its “serious shortcomings” and to enter parliament after Melia’s release from custody.

But in an announcement expected to inject further drama into Georgia’s unpredictable political landscape, the reformist former leader said last month that he will return from exile in Ukraine ahead of local elections this year.

Georgia’s pro-Western president in 2004-2013, Saakashvili was sentenced in 2018 by a Georgian court to six years in prison for alleged abuse of office, a ruling he denounced as politically motivated.

Officials have warned that Saakashvili will be arrested if he returns.

His conviction and charges brought against his allies by the Georgian Dream government have prompted criticism from the West over an alleged political witch-hunt.