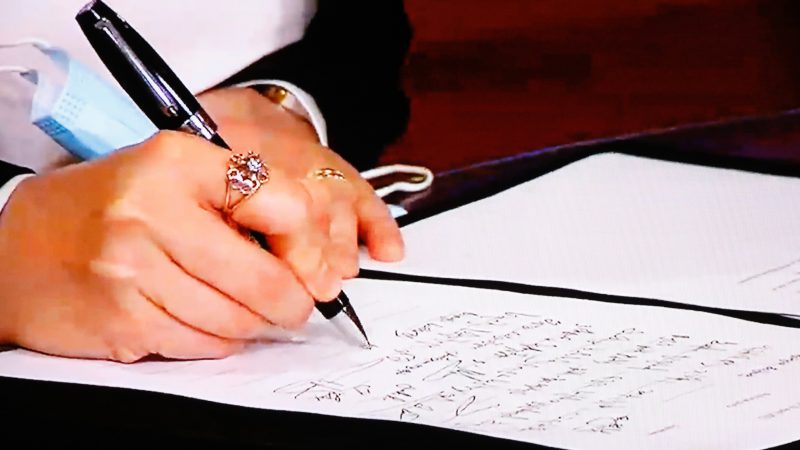 A videograb from the signing ceremony on 19 April 2021. [Council Newsroom]

Ending the opposition’s parliamentary boycott and paving the way for sweeping electoral and judicial reforms, the anti-crisis agreement — tabled the day before by European Council President Charles Michel — was signed by representatives of all political parties.

Georgia’s main opposition force, the United National Movement (UNM), will join the deal “after its (jailed leader Nika) Melia is released from prison as stipulated in the agreement,” Salome Samadashvili, one of the party leaders who signed the pact in her personal capacity, told AFP.

Michel praised the deal as “a truly European way of resolving the crisis.”

“This agreement is the starting point for your work towards consolidating Georgia’s democracy and taking Georgia forward on its Euro-Atlantic future,” he added.

He oversaw the televised signing ceremony held in Georgia’s presidential palace by video link from Brussels and was set to visit the capital Tbilisi on Tuesday.

Congratulations to political leaders on signing the deal out of the current crisis.

You put the people's interests first and let democracy prevail.

Michel said he would discuss with Georgian political leaders joint steps aimed at strengthening the ties between Brussels and the EU-aspirant nation in Europe’s extreme southeast.

The ex-Soviet country has been gripped by a political crisis since October’s parliamentary elections, which opposition parties denounced as rigged.

After the vote, opposition lawmakers refused to assume their seats in the new parliament and staged mass protests to demand snap polls.

The stalemate worsened in February after police arrested UNM leader Melia in a violent raid on his party headquarters, leading to the prime minister’s resignation and prompting swift condemnation from the West.

On a visit to Tbilisi last month, Michel initiated inter-party talks aimed at diffusing the spiralling crisis. The parties hammered out the agreement after two failed attempts.

The deal commits opposition parties to enter parliament, while the ruling Georgian Dream party has pledged to resolve cases of “perceived politicised justice” through amnesties or similar measures within a week.

That clause concerns the criminal case of Melia, who faces charges of organising mass violence during anti-government protests in 2019 — a case he says is politically motivated.

The agreement dictates that early parliamentary elections be called in 2022 if the Georgian Dream party scores less than 43 percent in upcoming local elections.

It also sets the rules for power-sharing in parliament — guaranteeing that opposition lawmakers would chair five committees — and stipulates sweeping judiciary and electoral reforms.

The United States welcomed the agreement “to bring an end to Georgia’s political crisis.”

However, despite Michel declaring the “crisis is over”, UNM reiterated plans to stage a mass anti-government rally on 15 May, saying the stalemate could only be considered resolved after Melia leaves prison.

In power since 2012, Georgian Dream and its billionaire founder Bidzina Ivanishvili have faced mounting criticism from the West over the country’s worsening democratic record.

Critics accuse Ivanishvili — who is widely seen to be calling the shots in Georgia despite having no official role — of persecuting political opponents and creating a corrupt system where private interests permeate politics.

The political crisis is over! Thank you to @eucopresident for his thorough involvement in this process. And thank you to the political parties who today, put country above party and signed a way ahead for Georgia.@CharlesMichel, see you tomorrow in Tbilisi! pic.twitter.com/o7RGgB31a6