Georgia reaffirmed its objective to becoming an EU member on Thursday (11 July), even if it meant an innovative approach and “knocking on every door”, its president told an international conference marking the tenth anniversary of the Eastern Partnership in the Georgian Black Sea city of Batumi.

“The time has come to set a new course in our relations, after a successful decade of partnership”, President Salome Zurabishvili told the 16th edition of the Batumi International Conference.

She said Georgia had deep European roots, as the home of wine-making and a Christian nation since the fourth century, a country that pioneered women’s rights, having had a female king in the 12th century, and by giving women the right to vote in 1918.

Democratic, peaceful, and European. That is what #Georgia is as a nation. 🇪🇺🇬🇪 pic.twitter.com/Yq2SKnsqKg

“Our values, culture, history are European, our population is European, 80% of our population support the objective of joining the European Union, and that is steadily in the last 15 years, without any change, without Euroscepticism”, she argued.

The president argued about the benefits from the current status of her country as associated with the EU and member of the Eastern Partnership, but stressed: “Georgia’s ambition doesn’t stop here, it goes even further on the path to EU membership”.

Zurabishvili said Georgia understood the EU’s internal problems and could be “a little bit patient”, but in return, it offered itself as a “testing ground” for innovative rapprochement. This, she said, should be based on full Georgian participation in more EU policies.

“We intend to knock on every door, to open every door, and by the time we are finishing opening all the doors, you will discover that Georgia has become an EU member”, the president said.

She said there was a need to “think outside the box”.

“We understand the difficulties of the political decision to award a country the candidate status […] One idea outside the box is for Georgia to start accession negotiations on an “ad hoc” basis. Such a pragmatic, non-institutional, non-political decision, would be very significative and very important,” she stressed.

As expected, Zubabishvili also mentioned geopolitics and the recent tensions with Russia.

Relations came under fresh strain two weeks ago when anti-Kremlin protests erupted in Tbilisi over a visit by a Russian lawmaker who addressed parliament in Russian.

“Unfortunately, our political destiny cannot ignore geography”, she said, reminding that on 8 August Georgia will mark the 11th anniversary of the war that resulted in the occupation of 20% of its territory.

“If this was meant to move us away from our European path, the resilience of Georgia has been our strategic response,” she said.

The president added that breakaway regions of Abkhazia and South Ossetia don’t make world headlines but they remain an open wound for every Georgian. She said the recent demonstrations were a “natural expression of what has been brewing for a decade”, and an expression of frustration over the lack of progress in solving the problem.

“The message of the Georgian people is that they also expect more support from Europe, more engagement when it comes to addressing occupation,” she said.

Zurabishvili said her country was continuing to host millions of Russian tourists with traditional hospitality and in full safety.

“The recent renewed tensions with Russia also demonstrate that unsolved conflicts and status quo is neither politically acceptable nor conducive to long-term stability,” she said.

Zurabishvili said her initiatives to de-escalate and re-invigorate the Geneva talks with a political dimension and her calls for Europe to be more engaged in supporting the peaceful resolution were the answers to the challenge.

“Our unwavering choice is for peaceful and diplomatic resolution of the issue of occupation”, she stressed.

As she spoke, protests were held outside the conference venue of the conference by citizens denouncing the police violence during the protests in Tbilisi and demanding the resignation of the minister of the interior.

Obviously a sign of functioning democracy. As the Batumi International Conference goes on, protesters gathered in front of its venue to denounce recent police violence in Tbilisi and ask for the interior minister resignation. All went well. pic.twitter.com/c6PAxnEpGn

EURACTIV asked three EU foreign ministers attending the conference – Poland, Bulgaria and Sweden – to comment on Zurabishvili’s proposal for an unconventional path to EU membership. Regrettably, there was no representative of French, a country seen as the biggest obstacle to enlargement-related decision-making.

Polish foreign minister Jacek Czaputowicz said the EU had to be honest and admit that some EU countries don’t want to hear about further EU enlargement. He said a recent summit held in the Polish city of Poznań last week showed again that there is no consensus for North Macedonia and Albania to open accession negotiations. 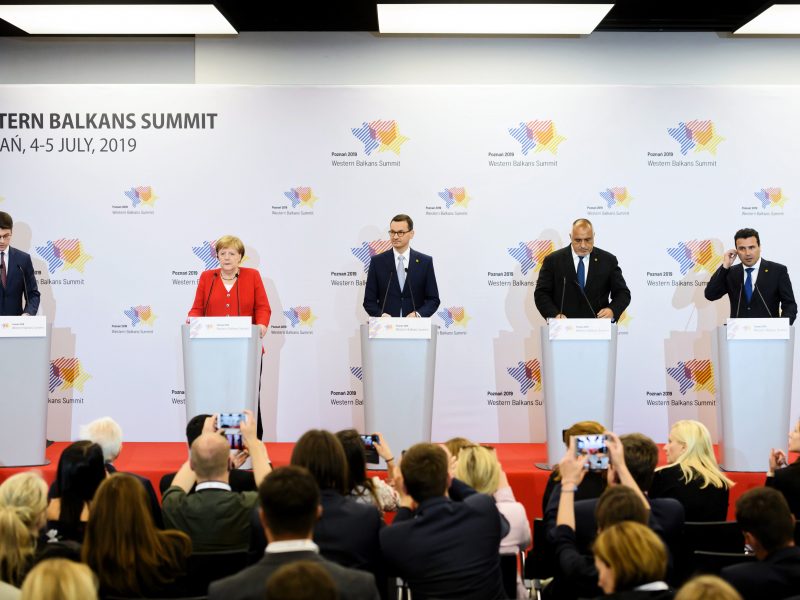 “It also applies to the Eastern Partnership process and Georgia. We need to be realistic,” he said.

Bulgaria’s foreign minister Ekaterina Zaharieva said that if Georgia is a frontrunner in its EaP group, it should be entitled to specific programmes matching its ambition. She said the proposal Zurabishvili made was “a great idea” and that it should be discussed at EU level.

Swedish foreign minister Margot Wallström said every European state can apply to be a full EU member if it fulfils the basic democratic and economic criteria. She mentioned a recent debate in Georgia on LGBT rights, suggesting progress was still needed in that respect.

Council President Donald Tusk spoke after Zurabishvili. He arrived the previous day in Georgia as part of a “10th anniversary of EaP” tour that also included Azerbaijan and Armenia.

In his usual style, Tusk made compliments to the hosts. The highlight of his speech however was when he quoted Russian President Vladimir Putin saying in 2005 that the collapse of the USSR was the greatest geopolitical catastrophe of the century.

“Today in Georgia I want to say loud and clear: the collapse of the Soviet Union was a blessing to Georgians, Poles, Ukrainians as well as to the whole of Central and Eastern Europe. And I’m convinced that also to Russians”, Tusk said.