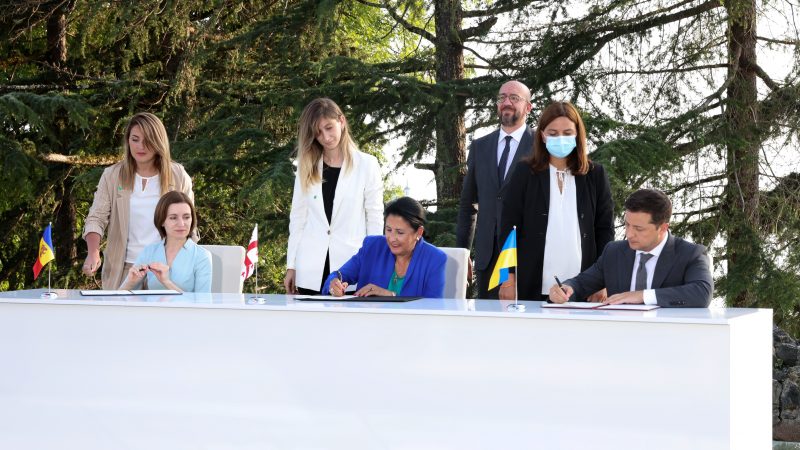 The signature of the Declaration of the Associated Trio at the fortress of Petra, on 19 July 2021. [Council Newsroom]

The summit declaration, signed by the Presidents Salome Zourabishvili (Georgia), Volodymyr Zelenskiy (Ukraine) and Maia Sandu (Moldova), is a further step in the emancipation of the three associated members of the Eastern Partnership (EaP).

Launched in 2008, the Eastern Partnership governs the EU’s relationship with six post-Soviet states, including Georgia, Moldova, and Ukraine.

But the Trio doesn’t want to be held back by the other three members of the EaP, which they perceive as having different agendas: Armenia, Azerbaijan, and Belarus.

One of the highlights of the summit was the speech given by European Council President Charles Michel, in which he saluted the Trio summit as “an important milestone”.

“We welcome the Trio’s initiative to foster coordination between the associated partners and with Brussels. This can lead to the sharing of best practices on reforms, on implementation, and on  broader agenda for the future,” said Michel, to the delight of his hosts.

Up to now, the EU was wary of endorsing an initiative which did not come from Brussels. But the EU now no longer avoids using the “Trio” expression, despite ongoing tensions in Georgia and Ukraine where Michel acts as a mediator.

In his speech at the summit, Michel, who appears to have developed a personal affinity for the region, saluted the fact that Georgia, Moldova and Ukraine are celebrating 30 years of independence from the former Soviet Union – in his words, “one generation of hard-won progress and sometimes painful setbacks”.

Our meeting with the leaders of Georgia 🇬🇪, Moldova 🇲🇩 and Ukraine 🇺🇦 is an important milestone.

We welcome the Trio initiative to foster coordination between the Associated partners and with the EU 🇪🇺.@Zourabichvili_S @GharibashviliGe @sandumaiamd @ZelenskyyUa pic.twitter.com/W1uxC1HLCT

“It has not been an easy journey with your countries facing interference or aggression,” said Michel referring to the conflict zones created by Russia: Transnistria in Moldova, Abkhazia and South Ossetia in Georgia, as well as the annexation of Crimea and the conflict in Donbas in Ukraine.

Michel reminded that the EU created the EaP 12 years ago, saying the partnership is now a reality that benefits all citizens of the countries concerned and of the EU.

Regarding the upcoming EaP summit in December in Brussels, he said the EU would remain a strong and reliable partner for the region, but that it counts on the countries’ commitment to advance reforms – “not to please Brussels, but in the interest of your own people and your own societies”.

We have priorities to address at the #EasternPartnership Summit in December.

Let's work with @EIB to support infrastructure projects and help #SMEs to grow.#Connectivity is key to strengthen cooperation in all areas.

Reforms are needed for the benefit of citizens. pic.twitter.com/eHoeC6Xob9

Michel reminded that when the COVID-19 pandemic struck Europe, the EU reacted to the needs of the six EaP partners and together with the EIB, mobilised €2.5 billion to support them in tackling the health crisis and recover from the economic recession.

Turning to other challenges – economic growth, climate change, the digital transition and promoting fair and inclusive societies – he said the EaP should be a launchpad for greater cooperation in all these areas, and serve as a catalyst for democracy, good governance and the rule of law.

He said that the Associated agreements with the three countries had boosted trade for as much as 45% in some cases, and that the free trade area they create can deliver more, making them able to compete on the global market.

Michel described as “impressive” the results of visa liberalisation between Georgia, Ukraine and Moldova. He said that more than half a million of their citizens have benefitted from visa-free travel so far, and that their young generation have benefitted from 80,000 exchanges under the Erasmus+ programme.

The European Council President mentioned good governance as a keyword to convey the message that the countries’ elites owe it to their nationals.

“Good governance is the key to unlock the benefits that liberal democracy can bring,” he stressed.

The summit was held in the afternoon, while during the entire morning Michel was mediating between the Georgian opposition and the Prime Minister Irakli Garibashvili, following new setbacks in the process of defusing a deep internal political crisis.

Michel made suggestions on how to foster closer cooperation between the three associated partners, by introducing competitive benchmarking on key reforms. In his words, this would help galvanise reform momentum and increase mutual support among partners and help secure the countries’ ever closer ties with the EU.

The host of the summit, Salome Zourabishvili, said that despite the polarisation in her country, Georgia’s European future was one area of undisputed consensus between political parties.

Despite the many challenges, including Russia’s occupation of part of the country, Georgia’s EU aspiration has never faltered, she stressed. She thanked Ukrainian President Volodymyr Zelenskiy for having visited earlier the same day the administrative boundary line with Abkhazia, a vast Georgian region occupied by Russia following a brief war in 2008.

Zourabishvili said the Batumi conference offered further proof that her country was supported and encouraged. “This also means that we have to do much more and much faster,” she added.

“The Batumi conference is a moment to take stock of the re-engagement of the EU in the region,” Zourabishvili continued. “The personal involvement of President Michel in Georgia’s internal political processes, but also his most recent visits to our two Caucasian neighbours, also partners in EaP, and the discussion of important projects in the region, mark the importance for the EU of a neigbouring region that would be democratic, stable and secure,” she said.

Michel visited Armenia and Azerbaijan before arriving in Georgia, promising more EU involvement in finding a solution for the disputed region of Nagorno-Karabakh.

Some of Zourabishvili’s messages were directed to the domestic audience. “Any internal divisions can only weaken our aims, the determination of our partners, and we should avoid it at all costs,” she warned.

Moldova’s President Maia Sandu impressed the audience with her modesty. She arrived with a small delegation and spoke briefly at the conference, without removing her mask.

Ukraine’s Zelenskiy was the only leader who spoke in his native language. He focused on the Russian aggression against his country and on his visit to the delimitation line in Abkhazia.

“If Brussels and the EU do not show iron support for the European aspirations of our three countries, then someone will show the iron muscles of their weapons near our three state borders. And this, in my opinion, is a threat not only to our three countries, but also to the entire continent,” Zelenskiy said.

“Russia is a threat for all the continent and this is why we don’t understand why the voice of our countries is not heard at the conference for the future of Europe,” the Ukrainian President continued. If some countries are seen are less important, then it is not a conference on the future of Europe, Zelenskiy said, speaking through an interpreter.

The summit ended with a visit of the four Presidents to the Petra fortress, south of Batumi, built in the 6th century, under the Byzantine emperor Justinian I.