Georgian mediation obtains the release of 15 Armenian POWs by Azerbaijan 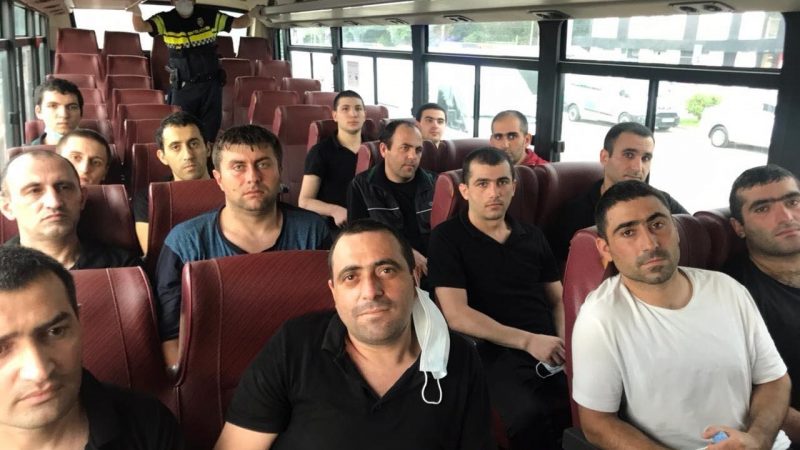 The released Armenian POWs. [Facebook page of the PM of Armenia Nikol Pashinyan]

Azerbaijan on Saturday (12 June) released to Armenia 15 prisoners of war captured last year during hostilities over the disputed Nagorno-Karabakh region, under a deal mediated by Georgian Prime Minister Irakli Garibashvili and saluted by the US and the EU.

According to the foreign ministry in Baku under the deal Yerevan reciprocated by providing Baku with maps of minefields in the conflict zone.

The US Secretary of State Anthony Blinken stated that the US was “grateful” to the Government of Georgia for its “vital role in facilitating the release”, and Garibashvili said he was “proud” of the role his country played in close coordination with US Acting Assistant Secretary Philip T. Reeker.

Proud of the role🇬🇪played in close coordination w/our strategic partner 🇺🇸 & Acting Assistant Sec Reeker to facilitate 🇦🇿's release of 15🇦🇲citizens detained during the conflict. 🇦🇲providing🇦🇿info about mined territories is an important step toward improved security in our region. https://t.co/ncizGfTO90

Fighting broke out between Azerbaijan and Armenia in September 2020 over Nagorno-Karabakh, claiming around 6,000 lives over six weeks.

The war ended in November with a Russian-brokered ceasefire under which Yerevan ceded swathes of territory it had controlled for decades.

On Saturday, “Azerbaijan handed over to Armenia 15 detained Armenians in exchange for the map of 97,000 anti-tank and anti-personnel mines in the Agdam district,” one of the territories Armenia has ceded to Baku, Azerbaijan’s foreign ministry said in a statement.

The ministry also thanked US Secretary of State Antony Blinken, top US diplomat for Europe Philip Reeker, European Council President Charles Michel, and the OSCE Swedish chairmanship for their roles in the negotiations.

“Our brothers returned to their families thanks to the efforts of Georgia’s Prime Minister Irakli Garibashvili, our Georgian brothers as well as our partners from the US and EU,” Armenian Prime Minister Nikol Pashinyan told journalists.

He said he had earlier “provided Azerbaijan with a certain number of minefield maps through Russian Foreign Minister Sergei Lavrov.”

Garibashvili’s office said in a statement: “An important step has been made towards the amelioration of the security environment in the South Caucasus region.”

Michel considered it “a first step towards renewing confidence, an effort the EU is ready to fully support”, the diplomat added.

The EU has supported this process and will continue to offer assistance to enhance progress.

EU foreign affairs chief Josep Borrell also welcomed “the actions taken by Armenia and Azerbaijan and facilitated by Georgia”. He said that these gestures would “hopefully open the path for further cooperation between the sides and the ultimate release of all Armenian detainees, as well as the handing over of all available maps of mined areas to avoid further civilian casualties.”

Russia, which has deployed peacekeeping troops to Karabakh, also welcomed the move.

The mountainous region of Nagorno-Karabakh is one of the most heavily mined places in the former Soviet Union.

Seven Azerbaijani troops and 18 civilians have died and 110 have been wounded by mines in and near Nagorno-Karabakh since the ceasefire, the Azerbaijani government says.

Both Azerbaijani and Armenian forces planted mines during a bloody conflict in the early 1990s.

Tensions have been again running high since May, when Armenia accused Azerbaijan’s military of crossing its southern border to “lay siege” to a lake shared by the two countries.

Moscow said it would help with the delimitation and demarcation of the neighbours’ borders.

The President of Azerbaijan Ilham Aliyev said last month that Azerbaijan was ready for pace talks with Armenia, while Pashinyan announced later the two ex-Soviet nations were holding discussions on the delimitation and demarcation of their shared borders.