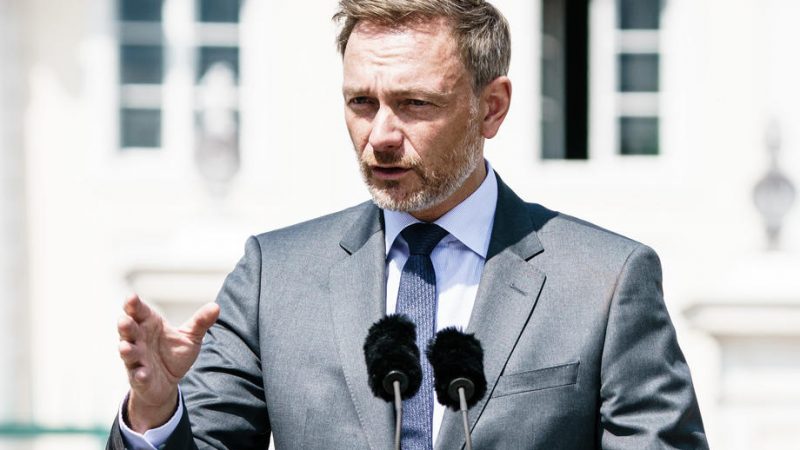 “I am politically open to the idea of seizing foreign assets of the Russian Central Bank. We are already having this discussion in the G7 and the EU, and there are proposals on the table,” Lindner told four European media. [Clemes Bilan/EPA]

German finance minister Christian Lindner has indicated his support for the idea of seizing foreign assets held by the Russian central bank to rebuild Ukraine following the war.

Around $300 billion in Russian gold and forex reserves have been frozen across the globe so far – $100 billion in the United States alone.

“I am politically open to the idea of seizing foreign assets of the Russian Central Bank. We are already having this discussion in the G7 and the EU, and there are proposals on the table,” Lindner told a group of European media outlets in an interview on Tuesday (17 May)

“For private assets, we have to see what is legally possible. We have to respect the rule of law, even if we are dealing with Russian oligarchs,” he added.

The discussion surrounding the confiscation of assets of the Russian Central bank is gaining traction ahead of the meeting of the G7 finance ministers on Wednesday and Thursday.

EU and US task forces have confiscated a growing number of yachts, mansions, bank accounts, helicopters, and artworks owned by Russian oligarchs sanctioned by the West.

As of April, the EU has already seized €30 billion in private assets linked to blacklisted Russian and Belarusian individuals. However, the frozen assets of the Russian Central Bank have so far not been touched.

The idea to use the frozen assets to rebuild Ukraine has already surfaced in various EU institutions.

Last week, the European Parliament called on the European Commission to use seized assets to fund the Ukrainian Army and to reconstruct Ukraine.

Similar calls have been voiced by EU chief diplomat Josep Borrell as well as President of the European Council Charles Michel.

“Personally, I am absolutely convinced that this is extremely important not only to freeze assets but also to make possible to confiscate it, to make it available for the rebuilding of the country (Ukraine),” Michel told the Interfax-Ukraine news agency on 5 May.

The European Commission published a post-war recovery plan for Ukraine in early May. According to Ukrainian authorities, around $600 billion is needed to rebuild the country, which is why transatlantic policymakers are eying the $300 billion in frozen assets of the Russian Central Bank.

However, the idea is not without critics.

The step to confiscate the money of the Russian Central Bank is “seductive”, but also “unnecessary and unwise,” two senior fellows at the think tank Bruegel, Nicolas Véron and Joshua Kirschenbaum, argued in a blog post.

“The Bank of Russia’s reserves are public money, and thus altogether different from though occasionally conflated with the frozen assets of sanctioned Russians,” they argue.

Furthermore, the move would do little to help Ukraine and bears “unnecessary risks to the strength and stability of the international financial system;” they added.