Georgian and EU officials upon opening the first European School outside the bloc's borders in Tbilisi, Georgia. 16/09/2019 [Government of Georgia]

EU and Georgian officials on Monday (16 September) launched a European School in Tbilisi, the first educational institution of this kind launched beyond the bloc’s boundaries, with the objective of strengthening relations with Eastern countries.

It is meant specifically for students coming from the Eastern Partnership (EaP) countries – Armenia, Azerbaijan, Belarus, Georgia, the Republic of Moldova and Ukraine.

In Tbilisi, Hahn said the school will function under Georgian law and offer a “unique curriculum” inspired by “European and international values of multiculturalism, peace and tolerance”.

Earlier this summer, Georgia reaffirmed its objective of becoming an EU member country, even if that meant “knocking on every door”, its president said.

The school’s aim will be to “integrate the Georgian system into the European education system through aligning the Georgian curriculum with European standards,” Hahn said in his inaugural speech.

“As EU Commissioner, my priority was to help young people in countries close to the European Union by giving them more opportunities, developing their skills and promoting their employment,” the Commissioner said.

Hahn, describing Georgia as a key EU partner in the region, presented the school as “just one more example of Georgia demonstrating its commitment to the European idea.”

“I hope that the model we are setting up will be replicated in other parts of Georgia as well as in the other partner countries,” he said in Tbilisi.

The school is part of 20 deliverables for 2020 adopted under the EU’s Eastern Partnership Initiative, endorsed by EaP leaders at a summit in November 2017. It is part of a wider €340 million support package for youth aimed at strengthening support for youth and education in the region.

The first cohort of 100 learners is expected to arrive in 2023, filling the lecture halls of the 26,000 square metres campus.

Georgia spends up to 4% GDP on education, more than most Western European countries, with the underlying aim of keeping young Georgians from emigrating abroad.

Georgian Prime Minister Giorgi Gakharia said the school is a “new step in the Georgian education system and for the EU-Georgia relations.”

“The students of the school will carry the values which will strengthen our country and help Georgia finally become an organic part of the EU,” Gakharia said.

The boundary has become contentious in the wake of tensions between Tbilisi and Moscow over Georgia’s aspirations to join EU and NATO, after a 5-day war in summer 2008, which claimed the lives of hundreds of people on both sides.

After the conflict, which ended due to a French-mediated ceasefire, Russia recognised South Ossetia and Abkhazia as independent states and stationed permanent military bases there.

Tbilisi and its Western partners have condemned the move as an “illegal occupation” of what amounts to 20% of Georgia’s territory.

“We emphasised that the implementation of recommendations issued by the OSCE, especially for the 2020 elections, will ensure a pluralistic and equal media environment and transparent elections,” Hahn said on the occasion.

Georgian Prime Minister Mamuka Bakhtadze announced his resignation on 2 September after little more than a year in the job, saying the country must not be riven by political divisions that could play into Russia’s hands.

Bakhtadze’s resignation came amid sagging popularity for the ruling Georgian Dream party following the brutal dispersal of an anti-Kremlin protest in Tbilisi on 21 June. Parliamentary elections are due in October next year. 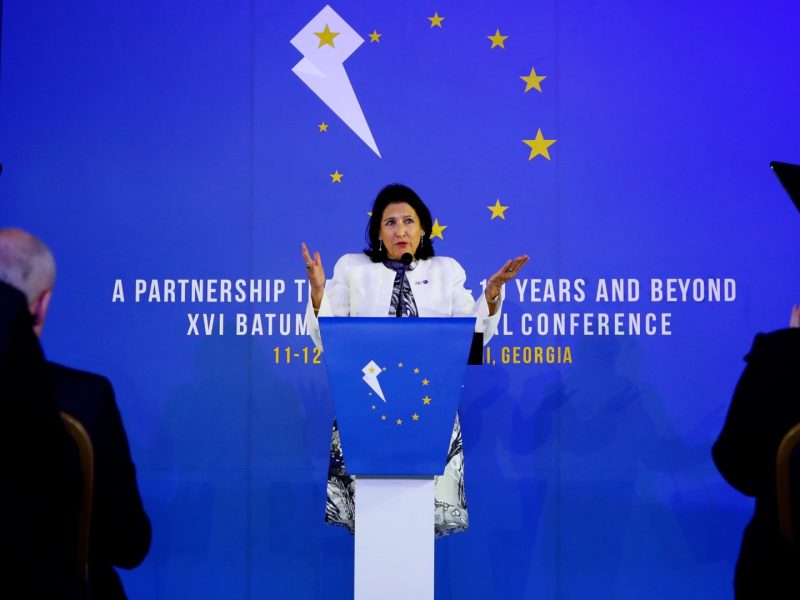