Russian Prime Minister Dmitry Medvedev reiterated Moscow’s support for Serbia during a visit to Belgrade on Saturday (19 October) and announced the signing of a free trade agreement between Serbia and the Russian-led Eurasian Economic Union (EAEU).

Medvedev paid a visit on the 75th anniversary of Belgrade’s liberation in World War II. He repeated Russia’s stance on respecting Serbia’s territorial integrity and sovereignty in Kosovo, whose independence, declared in 2008, Serbia and Russia don’t recognise.

He also attended a parade showcasing Serbian army’s capabilities and announced the signing of about a dozen bilateral agreements and memorandums.

As Medvedev put it, Serbian Prime Minister Ana Brnabić will sign on 25 October a free trade agreement with the EAEU, which functions on equal grounds, realising the pragmatic interests of its members.

The EAEU members are Russia, Belarus, Kazakhstan, Armenia and Kyrgyzstan. The free trade agreement with the EAEU will give Serbia access to a market of 180 million consumers.

Serbia’s negotiations on free trade with the EAEU started in 2016. There were some controversial issues, but they were resolved this spring. 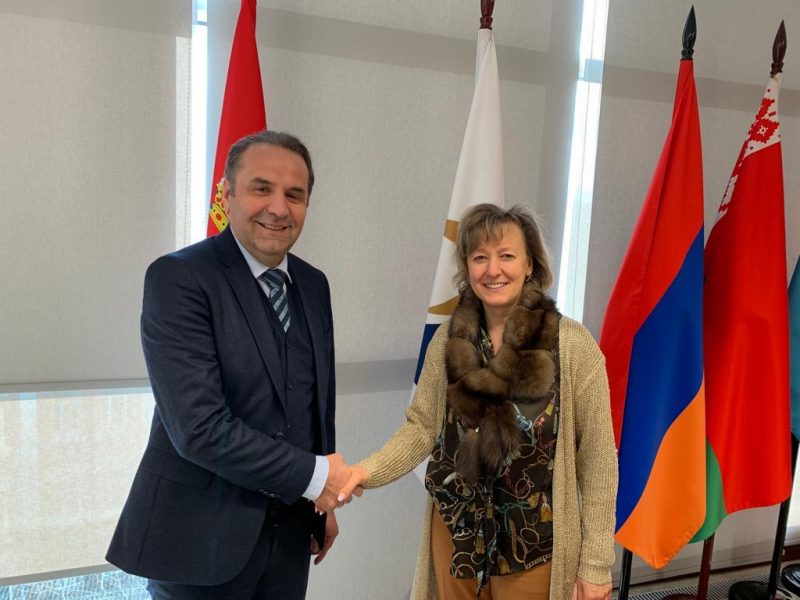 Current trade between Serbia and the EAEU member states is worth close to $3 billion, 90% of which is trade with Russia.

As an EU candidate country, Serbia can make free trade deals, but they will become invalid once the country has joined the EU, as the bloc’s free-trade deals have supremacy over national ones.

Nevertheless, EU member states do not look kindly on cooperation between a membership candidate and third countries. Russia, China and Turkey have over the past few years been intensifying their presence in the Western Balkans, particularly by investing in infrastructure projects.

Also, the countries aiming to join the EU, including Serbia which opened accession talks in 2014, are to gradually harmonise their policy – including trade and foreign policy – with that of the EU. Serbian officials say that will happen when Serbia becomes a member.

The EU is the biggest foreign trade partner, donor and investor in Serbia, even though the public does not always have that perception.

“If you are serious about your European orientation then obviously you make political decisions that bring you closer to it. This is not one of them,” AP quoted Lajčak as saying after a meeting of EU foreign ministers in late August.

On the subject of the EU, Medvedev said in Belgrade that countries should not be imposed a choice between the East and West, but should rather be left to act in line with their own interests.

“We highly appreciate the fact that Serbia has not imposed sanctions against Russia, despite great pressure,” Medvedev pointed out.

He also said that Russia is interested in a partnership relation with the EU, based on mutual respect.

Just over a third of the respondents believe Serbia should not be a member of either the EU, NATO or the EAEU.

As regards Kosovo, “the mother of all issues” for Serbia, Medvedev said Russia supports Serbia and is ready to help it in any way it can to preserve its territorial sovereignty and integrity, underscoring that Russia is only in favour of a peaceful solution in accordance with the UN Security Council Resolution 1244.

“We want stable Balkans and cooperation with all countries in the Balkans,” Medvedev said in a speech in the Serbian parliament.