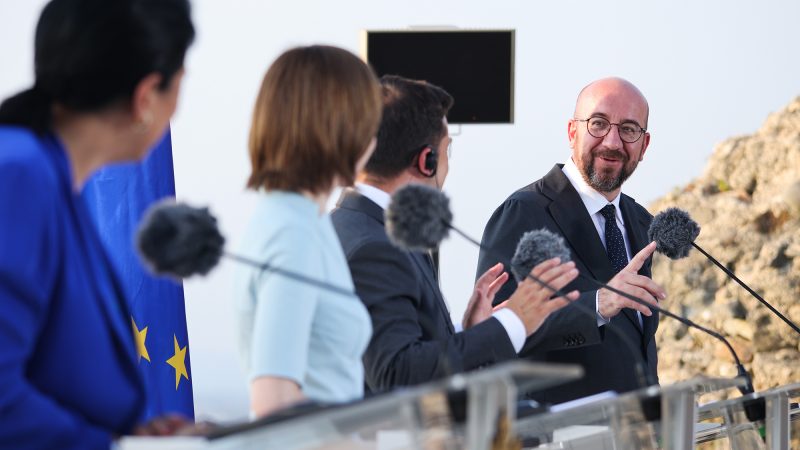 Georgia, Moldova and Ukraine have recently formally joined forces in a push for a deeper relationship with Brussels and eventual accession. [European Council/Copyright: European Union]

Though vast majority of EU countries welcome deeper integration with Georgia, Moldova and Ukraine, their “Associated Trio” initiative finds more support within Eastern and Central Europe, while the Commission and Western member states remain hesitant to adopt the term.

“We welcome the Trio’s initiative to foster coordination between the associated partners and with Brussels. This can lead to the sharing of best practices on reforms, on implementation, and on  broader agenda for the future,” said European Council President Charles Michel during his opening speech at the Batumi International Conference on Monday (19 July).

This was the first time a high-level EU official used the self-ascribed “Trio” term to reference Georgia, Moldova and Ukraine, which have recently formally joined forces in a push for a deeper relationship with Brussels and eventual accession.

“These three countries – sometimes referred to as ‘trio’ – are close neighbours of the European Union and partners within the Eastern Partnership,” a European Commission spokesperson told EURACTIV, in what appears to be the first time the EU executive using the term.

The Trio is packed together within the Eastern Partnership (EaP) with Belarus, Armenia and Azerbaijan, who have no intentions of joining the bloc.

The spokesperson said the EaP “will continue to be an inclusive and flexible policy” for all  EaP countries, “allowing for substantial differentiation and tailor-made approaches.”

“All of our neighbours are sovereign and independent. We respect their choices, foreign policy priorities and strategic objectives. In this respect we welcome the initiative for enhanced coordination between them and with the EU,” the spokesperson added.

Good winds in the East

However, signs are emerging that the Commission is under pressure from some member states, especially Eastern and Central European countries, who have long been the main proponents of closer EU ties with its Eastern neighbours.

Several diplomats from the region supported the initiative when asked by EURACTIV, though emphasised that it should remain within the current parameters of the EU’s relationship with its Eastern neighbours.

“We believe that within the Eastern Partnership policy principles of differentiation and ‘more for more’ should be applied in a non-discriminatory manner and in this context, Associated Trio should be treated as champions,” he added.

Asked about a of a long-term vision of joining the bloc, he said “the process of joining the EU is complicated, but Trio proved their willingness by implementing difficult and costly reforms. We believe that we have to reciprocate by granting them a membership perspective.”

Poland’s top diplomat in Brussels, Andrzej Sadoś, told this website his country welcomed the Trio initiative as “a timely and well-voiced proposal for their deeper engagement with the EU within the existing” Eastern neighbourhood policy framework.

At the EaP summit scheduled for December, Warsaw expects that the EU “will demonstrate an ambitious approach towards the future of the EaP policy offering the adequate mix of differentiation”, the permanent representative said.

Asked if the EU should offer a membership perspective to the Trio, Sadoś said that the three associated countries’ expectations “should be taken into account,” stressing that the rapprochement with Europe lies through the implementation of existing commitments and continued reforms.

“Implementing these bilateral agreements will make our partners fit to launch the official integration process once the EU is also ready to enlarge,” he added.

Another EU diplomat from the region was more cautious. They said the Trio was a “step in the right direction” but stressed that the initiative must remain within the Eastern Partnership platform, which should stay the “backbone” of the bloc’s relationship with its neighbours.

Caution in the West

Western EU member states, on the other hand, so far appear to stick to the Commission line.

One EU diplomat – avoiding the term “Trio” – said their country supported “deeper cooperation guided by a ‘more-for-more’ approach” with the three countries without mentioning that the new format could also be used in their relationship with Brussels.

Along the same lines, while welcoming more cooperation “among the trio countries and a deepening of the countries’ European integration through an incentive-based approach”, the Swedish foreign ministry underlined “the importance of the Eastern Partnership as one inclusive and unified policy towards the EU’s eastern neighbourhood.”

Yet another diplomat said “the opportunities offered by the respective Association Agreements between the EU and each of these countries must be fully exploited before creating any new instrument or format, be it on a bilateral or multilateral level [within the Eastern Partnership].”

While further differentiation was possible, it was “not through the creation of fixed groups that could jeopardise the inclusion of other partner countries,” they added.

The idea of creating a tripartite format for the three associated countries has been floating around for a couple of years now.

The materialisation of the Trio idea took some time because the “EU is slow to change its geopolitical attitudes,” MEP Andrius Kubilius told EURACTIV.

The former Lithuanian prime minister, who has been one of the biggest proponents of the Trio strategy within the European Parliament, expressed hope that now there is more understanding of the need to invest into the region’s integration and success, which can serve as an “inspiration for Belarusian and Russian people, who are starting to demand a democratic change in their countries.”

One area where there seems to be a cautious support between EU countries is the creation of a monitoring mechanism aimed at tracking progress on reforms.

While in Batumi, Michel suggested introducing a “competitive benchmarking on key reforms” within the associated partners, which in his view would help “galvanise reform momentum, increase mutual support among partners and help secure your ever closer ties with the EU.”

None of the diplomats asked by EURACTIV opposed the idea, though some said they would have to see the details of any proposed system.

“We competed with Latvia and Estonia during our pre-accession, which lead to a considerable results,” he added.

“It is a good idea,” MEP Kubilius said, adding that “it would be even better to have a competitive benchmarking between the Trio countries and the Western Balkan countries,” which are currently in the waiting line to join the bloc.

“Of course the Commission should do this and has the means to do so,” said Michael Emerson, associated senior research fellow at the Brussels-based CEPS think tank.

According to the researcher, while the current reports of the Commission for both the Balkans and the Trio already contain the necessary information, they “need to be upgraded with a simple system of quantitative ratings based on the Commission’s knowledge of performance of the associated states on all ‘chapters’ of the acquis.”

However, he emphasised that the benchmarking should be done by the Commission, “since only they have the combination of knowledge and ‘disinterest’ in favouring this or that country.”

“If the Trio were to do it themselves the temptation for each country to push their own interest would be irresistible,” he added.

A Commission spokesperson said that “it is clearly legitimate to look into the similarities between the associated partners who have signed up to ambitious agreements with the EU as they strive to implement relevant reforms.”

The spokesperson added that the Commission expects “associated countries to lead by example” and stands ready to discuss “whether any further competitive benchmarking – for instance when it comes to the implementation of commitments under the Association Agreements – may be useful.”