EaP Summit – Why the Trio initiative should finally find its way

By Teona Lavrelashvili and Ramūnas Stanionis 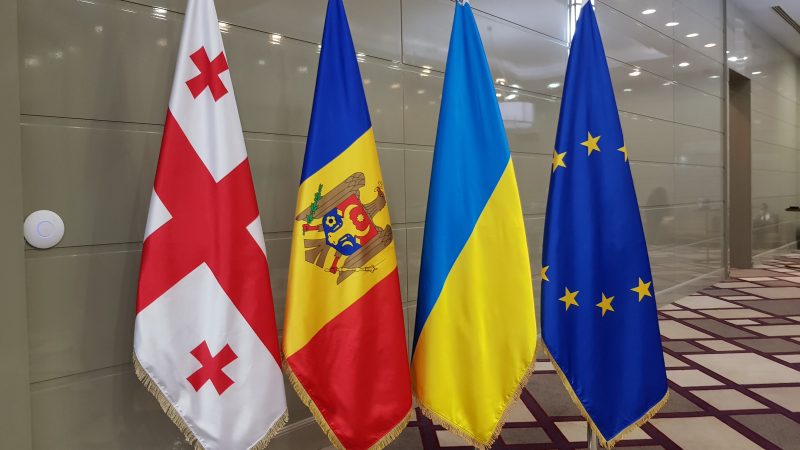 The upcoming EaP summit (15 December) will be a watershed moment to either push for a visionary policy or play “business as usual”, write Teona Lavrelashvili and Ramūnas Stanionis, who share their ideas on how to boost the ‘Associated Trio’ format.

The EU and its Eastern Partners will at last hold the long-awaited summit on 15 December. It will be the first physical summit since the pandemic outbreak, and it is expected to provide a “reinvigorated vision for EU-EaP cooperation and to endorse the post-2020 agenda”.

Although the EU has an important proposal for its partners, underpinned by a €2.3 billion Economic and Investment plan with the potential to mobilise up to €17 billion in public and private investments, including an increase in the security component, the vision of the EaP is missing. This fact may endanger the fate of the Associated Trio.

Despite the notorious enlargement fatigue that troubles many, the EaP and (and primarily) the Western Balkan countries, Georgia, Moldova and Ukraine remain hopeful in their European perspective and express the unwavering objective of becoming full-fledged members of the EU.

To increase their negotiating power vis a vis the EU, the three ministers of foreign affairs on 17 May signed a joint memorandum in Kyiv to establish the Associated Trio, and a few months later, their Heads of States adopted a trilateral declaration in the presence of European Council President Charles Michel.

With this, the so-called Trio Process was launched, with Georgia, Ukraine and Moldova committing to work together for “a peaceful, democratic and prosperous European future”.

Reactions to this appeared more hopeful than mixed. The countries of Central and Eastern Europe welcomed the format. It also found endorsement in the European Parliament, where the Trio ministers were cordially met by the delegation of the Foreign Affairs Committee. The Prime Ministers also recently concluded their meeting with the Presidents of the EU institutions in the Trio format ahead of the EaP Summit.

Yet, while some at the EU institutions (DG NEAR) remain cautious amid fears of seeing the EaP initiative becoming more fragmented and devoid of multilateral elements, others are convinced that this initiative, on the contrary, can bring a geopolitical perspective to the Eastern Partnership countries and revitalise the reform progress, despite their stalling today.

Fortunately, Brussels is increasingly aware that it will be very difficult to ignore the differences between EaP countries’ European aspirations and capacity to pursue EU integration[1].

Therefore, it is likely and necessary that, apart from endorsing the post-2020 agenda, the Eastern Partnership summit will take additional measures to acknowledge the Trio Process and agree on its intermediate goals.

To assist in this, the Trio countries should become more entrepreneurial in designing their vision for the Trio initiative. Inspiration for a vision that will make the Trio process work can be drawn from the recently published paper by Chairman of the Euronest Parliamentary Assembly, Andrius Kubilius, and his political adviser Ramūnas Stanionis. In it, they argue that the EaP policy should be reinvented by applying Romano Prodi’s “proximity policy”, a.k.a. “everything but institutions” to the Trio countries. The main ideas are the following:

These are ambitious but, at the same time, feasible steps, and to put them (or some of them) into practice, a more systematic and enhanced approach for structured reflections about the Trio´s vision, and a strategy, are needed.

The Associated Trio will not succeed unless there are sustained efforts from the EU and domestic actors, including societal groups, civil society organisations, think tanks, and political actors. To this end, it is worth thinking about establishing a Trio Advisory Group, which would be composed of CSOs, experts, and think-tank representatives from the three countries and the EU.

This type of platform or forum could be initiated by the Presidents of the European Council and European Commission in a special Civil Society Partners of the Trio Forum. This would have high political potential in terms of reform support and streamlining a strategy and will help to increase stakeholder engagement and effective outreach.

Another idea would be reflecting on how to involve better the European Political Parties and their engagement with the sister parties from Georgia, Ukraine and Moldova in supporting the Associated Trio process, perhaps by encouraging them to create/improve the potential of internal party platforms and networks to increase their efforts to facilitate constructive dialogue to ensure cross-party consensus around the initiatives of the Trio process at the regional, domestic and EU levels.

In the absence of the EU enlargement perspective for these countries, the Trio process could be understood as a new momentum to seize and further elevate reform and economic growth progress in the Eastern Partnership.

Obviously, this requires consolidating the efforts of political and societal actors’ efforts and, above all, a clear political will to endorse such an initiative from the EU institutions and their leadership. That is why the upcoming EaP summit will be a watershed to either push for a visionary policy or to play “business as usual.”

However, the latter, if chosen, will gradually hollow out the EU’s transformative power and overall geopolitical credibility.