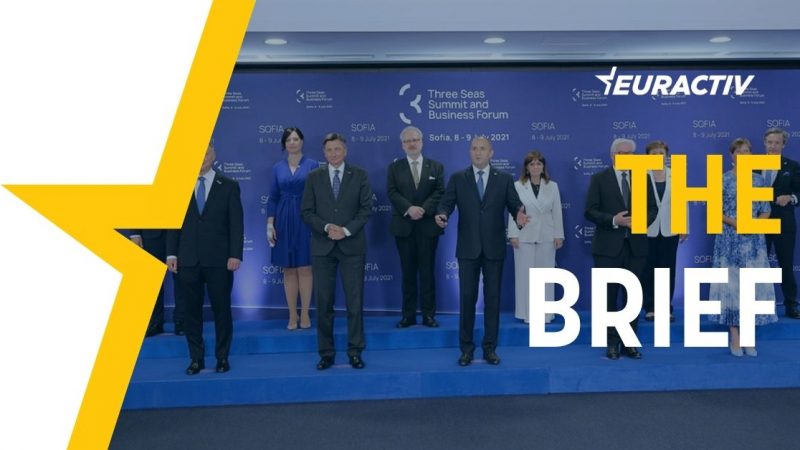 The Brief is EURACTIV's evening newsletter. [Office of the President of Bulgaria]

Sofia hosts a summit of the Three Seas Initiative (3SI) on Thursday and Friday (8-9 July) at a very inconvenient time – just before the snap general elections to be held in Bulgaria on Sunday. It’s not great when geopolitics interferes with politics.

The 3SI is viewed as a US-favoured initiative, although it was officially launched by Poland and Croatia in 2015.

It gathers 12 EU countries at the level of presidents, mostly from Eastern Europe (from north to south: Estonia, Latvia, Lithuania, Poland, the Czech Republic, Slovakia, Austria, Hungary, Slovenia, Croatia, Romania, and Bulgaria) which link the geographic space between the Baltic, the Adriatic, and the Black Sea.

And the Sofia summit is taking place at a time when the Black Sea is becoming an increasingly dangerous place.

The 3SI largely mirrors an earlier Chinese initiative, 16+1, aimed at promoting the Belt and Road. But now, with Joe Biden in Washington, 16+1 is no longer fashionable, and some members are already leaving.

The 3SI became pregnant with geopolitics in 2017, when the then US President Donald Trump attended a summit in Warsaw in an effort to patch up relations with the Eastern flank of European allies after a tense NATO gathering two months before.

A year later in Bucharest, Trump’s Secretary for Energy Rick Perry added to it the energy dimension and some financing, with the objective of reducing the energy dependence from Russia.

This time, Biden is expected to deliver a video address.

And there is some potential for the Three Seas to become Four Seas, because the Greek president is attending the summit in Sofia, for the first time, which could indicate a Hellenic interest to add the Aegean to the panoply.

In Bulgaria, geopolitics has always been divisive, with a large part of the electorate supporting the country’s Western orientation, and others calling for neutral positions or closer relations with Russia.

Ahead of such an important election as Sunday’s, expected to break the deadlock following the inconclusive April ballot that failed to produce a government coalition, geopolitics is disrupting the Bulgarian political scene.

Although, however, the geopolitical significance of 3SI is probably overblown.

For anti-EU and pro-Russian political forces, such as Volen Siderov’s Ataka, or Vazrazhdane (Revival) of Kostadin Kostadinov, or “Left Alternative” of former PM Zhan Videnov, the 3SI is also a bonanza, allowing them to lambast the pro-US stance of President Rumen Radev and the mainstream political parties.

Although none of these forces is expected to cross the 4% threshold and enter Parliament, the summit is an opportunity to “steal” votes from parties that have the potential to form a coalition government.

On the right-wing side, there is also criticism of Radev for not being sufficiently pro-Western and staunchly anti-Russian, and for being ambiguous about the 3SI objectives.

Radev has been focusing on the business opportunities the initiative can offer, latching onto the EU buzzword of “connectivity”. According to the Bulgarian vision, the 3SI is a platform that can strengthen cohesion and convergence within the EU. The Commission supports the 3SI and Vice President Margrethe Vestager is in Sofia.

Radev’s critics point to the absence of some of the participating countries’ heads of state.  Austria, for example, is represented at a lower level.

Pro-Radev commentators retort that this is not a snub to the Bulgarian president and that Austria is pro-Russian because it supports the Nord Stream 2 pipeline project. This kind of criticism is, of course, rich coming from Bulgaria, which under its previous prime minister, Boyko Borissov, invested heavily in TurkStream, another Gazprom-favoured project.

For the public and politicians, the 3SI is exactly what they want to see in it.

The EU’s agricultural subsidies should be restructured to achieve environment and climate goals, including a phase-out of direct payments and the reduction of livestock, according to a milestone report from the German commission on the future of agriculture. EURACTIV Germany reports.

The EU is facing a patchwork of travel rules across the bloc despite having a fully operational EU digital COVID certificate, MEPs have warned and called for harmonised measures instead of national restrictions.

A coalition of European electricity groups including EDF, Enel, Iberdrola, and Ørsted have called on the European Commission to impose a carbon tariff on hydrogen imports coming into Europe.

Italy has promised to give battle after Croatia’s request to get EU protection for its sweet dessert wine, prošek, produced in the southern area of Dalmatia whose name resembles the iconic Italian bubbly wine prosecco.