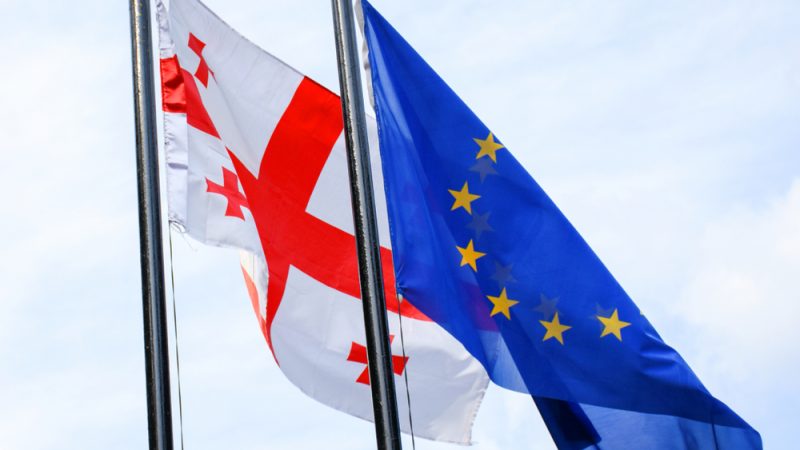 Georgia’s application for EU membership did not come out of the blue. It was neither on a whim of the government nor a cynical exploitation of growing European sympathy towards Ukraine, write Nikoloz Samkaharadze and Giorgi Khelashvili. [Shutterstock]

The war in Ukraine highlights not only Georgia’s security predicament but also the long way the country has come since the 2008 invasion by Russia. While becoming a member state may take time, the EU must send the right signals to an overwhelmingly pro-EU country that has paid a heavy price for its Western aspirations, writes Shalva Papuashvili.

Shalva Papuashvili is Speaker of the Parliament of Georgia.

After being ravaged by Russia in a 2008 war, Georgia has not retreated from its pro-Western course. Quite the contrary, after the seminal 2012 elections, it has both reinforced the objective of making integration to the European Union and NATO key priorities. The acceleration of Georgia’s drive towards the EU and NATO and the popular support for its European and Euro-Atlantic aspirations are now explicitly written into its constitution, as a result of the pivotal 2017-2018 changes that turned Georgia into a fully-fledged European-style parliamentary democracy.

Thanks to an ambitious reform agenda, which radically liberalized markets and effectively eliminated corruption, the country developed close ties with the EU. The Association Agreement with the EU, signed in 2014, deepened EU-Georgia relations and further advanced the reform process. Applying for EU membership is therefore not a recent aspiration, but the culmination of decades of pro-EU policies which peaked in 2020 when the Georgian Dream party made EU candidacy its official goal.

The greatest challenge of Georgian politics, domestic polarization, is itself an undesired by-product of Georgia’s rapid democratization in the last decade. The Georgian media has never been freer and more diverse than at present, explaining in part why political controversies are amplified and widely shared internationally.

But following the 2020 elections, an unprecedented number of political parties now sit in Parliament which currently has the closest government-to-opposition ratio that Georgia has ever seen since independence. Debates over reforms are often bitter and uncompromising, but these debates proceed amid the continuous and dynamic process of institution building and strengthening oversight of the government.

Remarkably, Georgia’s Western integration stands above the political debate. Parties may at times accuse each other of being less pro-European as the integration into the EU and NATO has been the foundation of Georgia’s independence and national identity. And Georgia has definitely delivered on its progress toward the West.

In comparison with the best-performing candidate countries in the Western Balkans and with the other members of the so-called Associated Trio – Georgia, Moldova, and Ukraine – Georgia excels on market access, public procurement, and intellectual property rights, where it has been gradually approximating EU laws.

Georgia has cultivated fast and competent customs services as well as sound financial markets with a stable banking system in line with EU standards. With an efficient transport sector regulated by rules closely resembling EU legislation, the country has developed into a major transport and logistics hub for the Black Sea region.

In terms of environmental and climate change policy, the country deserves praise for vast improvements in waste management, air quality, and industrial emissions. Huge progress has also been noted in the digital sector, with strong alignment with EU norms on data protection and cybersecurity. Georgia is far ahead of the other Trio countries in terms of its fight against corruption.

Given these developments, Georgia can become a crucial part of the EU’s re-shoring strategy which aims to develop more resilient supply chains and reduce dependencies on distant markets. As the COVID pandemic has changed the context of the global trading system and made diversification of supply chains a policy priority, Georgia can be a key strategic partner for the EU in the textile and pharmaceutical sectors.

Georgia has also made notable achievements on human rights. The government adopted a National Human Rights Strategy between 2014 and 2020, implementing recommendations from the UN High Commissioner for Human Rights as well as national and international human rights NGOs. In fact, the country has a vibrant civil society landscape. With a stronger democratic culture, Georgian society is getting more attuned to and demanding of high standards of rule of law, that had remained elusive in past decades.

Georgia’s commitment to EU laws and values is even more striking considering 20% of its territory has been occupied by Russian forces since 2008. The Russian invasion of 2008, which was preceded by a painful trade embargo on Georgia’s agricultural sector, did not break Georgia’s pro-European spirit.  Rather, it strengthened the country’s resolve and helped diversify its growth model.

Georgians pay a considerable daily price for the country’s political aspirations. Farmers living near the occupied territories are regularly arrested and kidnapped by Russian troops for crossing an arbitrary and blurry demarcation line that separates Georgians from their land, impoverishing thousands.

The Russian invasion of Ukraine brings back painful memories especially as Russian troops remain stationed in Abkhazia and Tskhinvali. Although the Georgian economy is remarkably diversified, Russia, as a significant trading partner, can at any time wreak havoc on Georgian society by cutting off wheat supplies and other essential raw materials.

Despite the existential threat, the Georgian government has taken a clear stance on the illegal and tragic invasion of Ukraine, condemning Russia’s military aggression, providing humanitarian aid, cooperating with international partners in the International Criminal Court concerning the Russian invasion of Ukraine.

Georgia also works with the EU to ensure compliance with international sanctions against Russia. Unsurprisingly, the situation has accelerated the government’s planned application for EU membership which, if granted, will undoubtedly have a unifying effect on the country and further boost its determination and reform efforts to join the EU bloc.

Despite dynamic and evolving cooperation, the EU has failed to send clear signals about eventual EU membership for Georgia.

In 2019, Georgia’s proposal to establish a structured dialogue at the ministerial level and expand trade ties with a view to its full integration into the Single Market did not receive a positive response. Such restraint can be understood during the early years of the Association Agreement when there was uncertainty about Georgia’s long-term commitment to reforms, but it has become evident that Georgia’s willingness to achieve EU integration remains solid.

Not only has the country demonstrated a continuous track record on reforms, alignment with EU values and an overwhelmingly pro-European population, but its support for EU membership has grown in recent years, an aspiration that points to the importance of the EU granting the country candidate status.

As we enter the second month of the Russian invasion of Ukraine, EU engagement in its Eastern Neighbourhood has become a geostrategic priority. It also has the potential to provide people with a cause to rally behind and the reassurance that in these uncertain times a better future is on the horizon.

The EU should, therefore, extend the enlargement process not only to Georgia, but also to Ukraine and Moldova. Together, this trio could coordinate reform progress, discuss strategies, and share best practices in ensuring expeditious compliance with the EU acquis.

Drawing parallels to the end of the Cold War and the 2004 enlargement, the EU must realize that it is facing another decisive moment and embrace its responsibility to integrate Georgia into the EU. Membership of the EU bloc is the sole tangible beacon of hope for Europe’s Eastern neighbours who strive for freedom and economic prosperity in the face of the biggest security threat since the end of the Second World War.