The Commission published on Wednesday (18 November) its opinion about the draft 2021 budgets sent by the euro area countries in mid-October. It concluded that national governments followed their recommendation for adopting a targeted and temporary stimulus to overcome the economic fallout of the pandemic and the restrictive measures to contain the virus.

In the case of France, Italy, Lithuania and Slovakia, the Commission, however, warned that some of their measures are not temporary or compensated by other budgetary decisions.

In addition, the Commission released its Alert Mechanism Report to detect imbalances in the EU economies in various sectors, including unemployment or debt levels.

The EU executive concluded that twelve countries registered imbalances that need to be followed over the next months: Croatia, France, Germany, Ireland, the Netherlands, Portugal, Romania, Spain, and Sweden, while Cyprus, Greece, and Italy are identified as having excessive imbalances. Croatia and Romania and not in the eurozone.

These countries were already flagged by the Commission last year, but the report warned that the impact of the pandemic “appears to exacerbate existing imbalances within the euro area”. 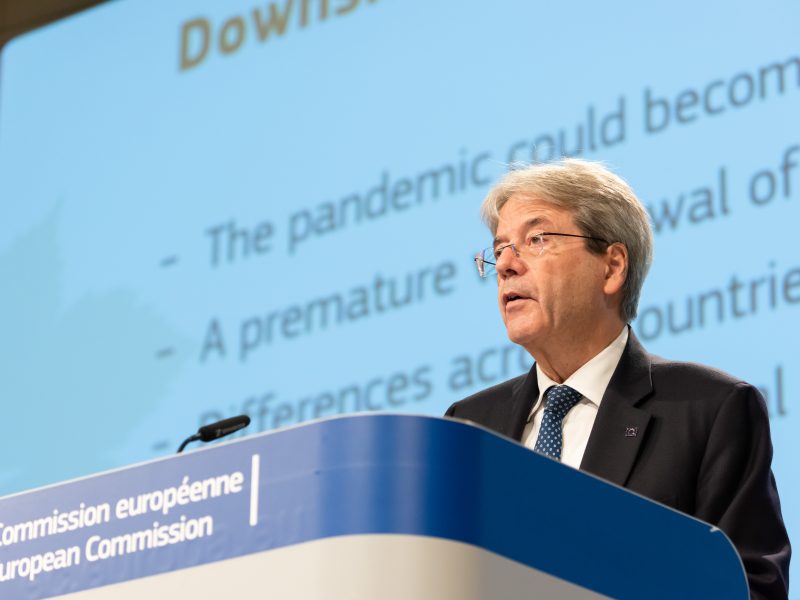 The situation worsened further over the past weeks due to the impact of the second wave of the virus, as it interrupted the strong recovery that the European economy witnessed in the third quarter.

“We are not having a ‘V’ shape recovery,” the Commissioner for Economy, Paolo Gentiloni, said on Wednesday.

“We are working strongly to avoid the risk of a double dip recession,” he stressed.

He explained that the priorities for member states are to support the recovery with the extra spending and address the consequences of the crisis in the short term.  In the long term, they should invest and reform their economies to make them more resilient, ‘greener’ and digital.

The Commission’s executive vice-president for Economy, Valdis Dombrovskis, warned against the risk of withdrawing too soon the stimulus rolled out to sustain the economies.

The premature ending of the stimulus during the previous crisis triggered a second recession in Europe in 2012.

The extra fiscal leeway given by the Commission, thanks to the suspension of the Stability and Growth Pact, could go beyond next year, Gentiloni had suggested in recent weeks.

However, the Commission is also worried about the growing level of public debt, in particular in Belgium, France, Greece, Italy, Portugal and Spain.

Given the uncertainties around the economy and high risks to the sustainability of their public accounts, the EU executive highlighted the importance of preserving the fiscal sustainability in the medium term when adopting any support measure for their economies.

Although the extraordinary measures, especially the short-term programmes to retain workers, helped to contain the damage, Nicolas Schmit, the Commissioner for employment, warned that the situation will worsen in the coming months, with the young and those with temporary or atypical contracts among the most affected ones.

The EU’s €750 billion recovery fund, including the Recovery and Resilience Facility (RRF), will be an important piece of the strategy to spur the recovery without impacting national coffers.

But their approval has been blocked by Hungary and Poland, in response to their opposition to the rule of law mechanism.

Dombrovskis and Gentiloni urged member states to find a solution so the European funds can be released next year.

“It is vital to get these RRF funds flowing quickly towards where they are needed, so countries can move ahead with reforms and investments in line with the relevant country-specific recommendations,” Dombrovskis said.

To access the recovery funds, member states will have to submit reform and investment plans, once the fund is up and running. Dombrovskis explained that the Commission is already discussing with various capitals their draft plans, and there is a “good progress” for a large part of them.

Schmit added that “it is crucial that in a crisis, we reach out to the most vulnerable in society, and place extra emphasis on fighting poverty, exclusion and inequalities.”