The EU executive presented on Tuesday (24 October) 26 initiatives to complete ten political priorities set by Commission President Jean-Claude Juncker at the start of his mandate in 2014.

According to the Commission, more than 80% of the initiatives contained in these ten priorities have already been put forward.

“We set a limited number of new proposals which will be delivered by May 2018, so the legislative work here [the European Parliament] and in the Council can be finished before the elections,” the Commission’s First Vice-President Frans Timmermans told the Parliament’s plenary session.

Given that 2018 is his final opportunity to leave his mark on the European project, Juncker outlined a bold vision for the EU during his State of the Union address last September.

The big push will come in December as part of a package to complete the economic and monetary union.

The executive will announce proposals to transform the European Stability Mechanism into a European Monetary Fund, and to integrate the fiscal compact into EU law, as was foreseen by the member states when they signed this treaty in 2012.

The Commission will also explore the feasibility of creating a permanent European minister of economy and finance “who is democratically accountable”, as well as a dedicated eurozone budget line within the EU budget.

This budget line, already announced in the state of the union address, falls short of French President Emmanuel Macron’s proposal for a eurozone budget representing “several points” of the eurozone’s GDP to bring more solidarity among the euro partners.

Under Macron’s grand plan, this budget would represent the fiscal pillar still missing in the monetary union 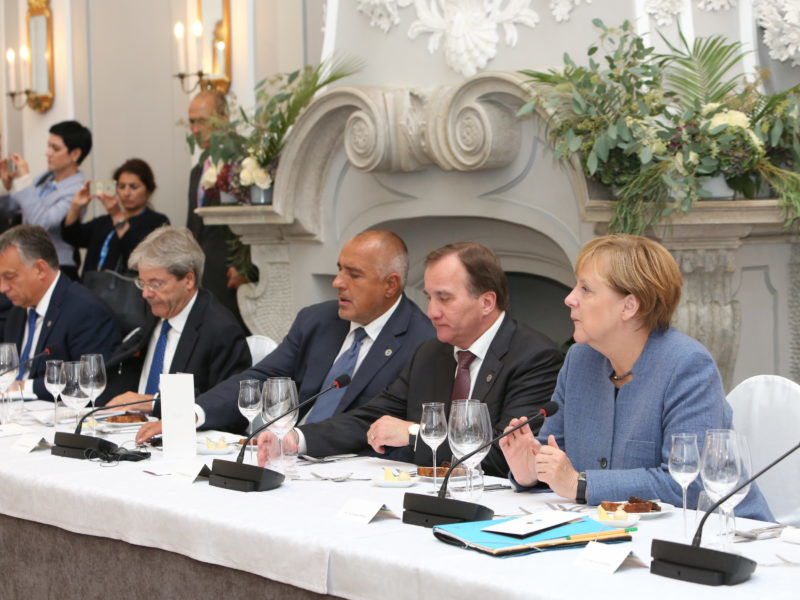 But Juncker’s financial instrument will be smaller (the total EU budget is around 1% of the member states’ GDP) and would cover other priorities besides the stabilisation function in case of shocks.

For example, it will support structural reforms in the member states and serve as a backstop for the banking union’s single resolution fund. It will also help EU member states in their pre-accession process prior to becoming eurozone members.

Senior officials, including ECB Vice-President Vítor Constâncio, pointed out that both proposals are interlinked as the superminister of finance would be in charge of overseeing this new eurozone budget if it was created.

In early 2018, the Commission will present its proposals to progress on the financial front, both to strengthen its common banking system (banking union) and to bolster the capital markets in the EU.

The commissioners will unveil an action plan on Financial Technology (FinTech), including a proposal for an EU framework on crowdfunding, and possibly an EU passport for these new startups in the financial sector to operate across the bloc.

The institution will also publish an action plan on sustainable finance, which will include some of the regulatory proposals the high-level group on this topic is expected to issue in its final report later this year.

In the first quarter of 2018, the Commission will also present an initiative to build a secondary market for non-performing loans. This is the executive’s response to the request made by some, including the European Banking Authority chief Andrea Enria, to set up a European ‘bad bank’ to absorb the banks’ impaired assets.

During that quarter, the executive will also unveil a framework for the development of EU sovereign bond-backed securities. This new financial instrument could help reduce the weight of sovereign debt on the banks’ books and break the “diabolic loop” between banks and sovereign debt in the EU, the officials said.

Besides the 26 new initiatives included in the European Commission's work programme, the institution also identifies 66 priority pending proposals presented in the past two years where swift adoption is needed.

The Commission also suggests to withdraw 15 pending proposals where there is no foreseeable agreement or they no longer serve their purpose or are technically outdated. The Work Programme proposes 15 proposals that are not fit for purpose anymore, as concluded by regulatory fitness and performance (REFIT) reviews of current laws.