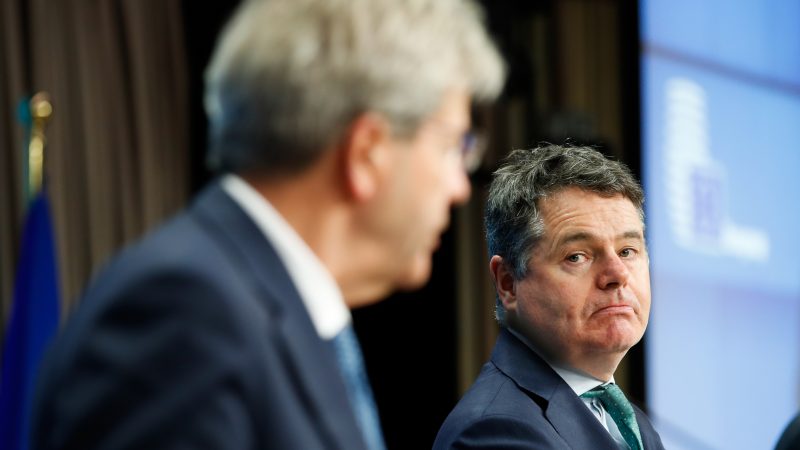 Monday’s meeting of the eurozone finance ministers was the first opportunity to discuss the review of the EU’s economic governance framework. While Commissioner Gentiloni hoped for a fresh start in the debate, the Austrian finance minister Gernot Blümel insisted on keeping the current rules.

Ministers discussed the economic outlook, high energy prices, the digital Euro, and risks in the banking sector. Moreover, they had the first exchange of views on reviewing the Commission’s recently launched economic governance framework.

Eurogroup president and Irish finance minister Paschal Donohoe said: “Overall, our efforts will be about how we can strike a balance between fostering growth-friendly investments and ensuring fiscal sustainability.”

Donohoe also said that the finance ministers had agreed on a “work plan” to tackle the review.

Commissioner for economy Paolo Gentiloni pointed out that the economic governance framework would have to allow “massive investments” to achieve the green transition and sustain growth.

One of the goals of the review is to make the rules simpler, according to Gentiloni. Bearing in mind the hotly debated arguments of the past years, he tried to mark a new start to the debate.

“We need to avoid having the review as just another chapter of an old story, in which old statements are repeated”, Gentiloni said.

Instead, the review of the economic governance should be “the first chapter of a new story”, he argued.

However, an “old story” cannot just be declared finished by a commissioner’s decree. Before the meeting, Austrian finance minister Gernot Blümel positioned the Austrian government as a staunch defender of the current fiscal rules.

“The question we are debating is whether there should be more exceptions to make more debt”, Blümel said. “We are against it”, he added.

Blümel also weighed in on the German coalition talks, calling for the FDP’s Christian Lindner to become finance minister. In Lindner, the Austrian finance minister sees a strong potential ally in his quest to keep fiscal rules as strict as they are.

Strong allies for fiscal austerity are in short supply these days, the Netherlands being a case in point. The Dutch government, which resisted the common financing of the EU’s recovery fund and the Austrian government in the summer of 2020, is currently bogged down in difficult coalition talks at home.

The French government, meanwhile, insists on the need for a reform of the framework. French finance minister Bruno Le Maire called the current debt limit of 60% of GDP “obsolete”.

“However”, he added, “Before defining the rules, we should define the goals.”

The ministers will have several opportunities to discuss both the goals and the rules of the economic governance framework over the coming months. In the first quarter of 2022, the Commission is expected to issue first guidance on how it aims to proceed.