Germany’s Minister for Economic Affairs and Energy Peter Altmaier presented the German government’s autumn projection to journalists last week in his customary sober manner. “The German economy is going through the longest period of upturn since 1966,” he said.

The forecast he made for the German economy sounded near flawless. While economic growth is predicted to slightly drop by 2020, wages will rise, as will consumption, there is supposed to be greater investment again and Germany will head towards full employment.

Germany has recovered well from the euro crisis but not all eurozone countries have fared so well. Many states are still struggling with high unemployment – almost one in five Spaniards are still looking for work. Italy, meanwhile, is sitting on the eurozone’s second biggest mountain of debt and is still planning expensive social reforms.

In Germany, however, there has been such a big upturn since the 2009 euro crisis that the economy is setting records again.

“Ten or fifteen years ago, nobody could have imagined that our economy would look like it does now,” says Jürgen Matthes from the German Economic Institute. He sees the catalyst in the so-called “Agenda 2010” reforms under Social Democratic Chancellor Gerhard Schröder, which created a low-wage sector and gave the German economy greater competitiveness.

However, Germany’s competitiveness is repeatedly the subject of criticism at the international level. The country has recorded the world’s largest trade balance surplus for three years in a row.

US President Donald Trump is not alone in being bothered by this – “the Germans are bad, very bad” – the IMF and the European Commission complain repeatedly that Germany should adhere to the 6% trade balance surplus, as specified by the EU. Higher figures endanger the eurozone’s stability – a painful lesson learnt from the euro crisis.

There are also other member states crossing the 6% line. For instance, the trade surpluses of Ireland, the Netherlands and Malta were significantly higher. However, in absolute numbers, the German export capacity stands out far beyond the European mean. The data from the first quarter of 2018 illustrates this difference: Austria, in second place, had a surplus of €5.3 billion. In contrast, the German export giant achieved €71.5 billion.

Germany’s extremely ‘positive’ trade balance is the result of exporting its goods on a massive scale without importing to the same extent. The problem is, some argue, that other states import too much as a result and are pushed into the red. In other countries, the demand for its own products is restrained because German products have been asserting themselves through their high competitiveness.

Moreover, Germany benefits from a relatively weak euro. Added to this is the typically German characteristic of wanting to save money. The state is building large reserves and, according to the Ifo Institute, private investors have deposited around €63 billion abroad, rather than putting this into circulation.

At the German Economic Institute, and within the German government, the surplus is not necessarily seen as a bad thing.

“However, we wonder why the surplus is still so high since Germans have been consuming more again for several years. Businesses are investing less dynamically than previously but the degree to which this is having an impact it is not very clear,” said Matthes.

He added that in order to encourage Germans to invest, there needed to be political incentives, such as less bureaucracy, lower corporation taxes and better conditions for investment. In particular, public investment was also required, according to Matthes.

“The German government is still resting on the achievements of Agenda 2010. Overall, nothing very reasonable is coming out of the ‘Grand Coalition’ that would address the investment problem.”

Of course, the German government sees this differently. The National Reform Programme 2018 underlined that the government has taken measures to strengthen domestic demand. For example, there have been reductions in income tax and social security contributions.

In addition, Matthes states that the state is, of course, unable to influence certain factors, such as the price of oil or the high competitiveness of “Made in Germany”.

Setting out the autumn projections, Minister Altmaier insisted that his hands were tied: “We don’t want to prevent our companies from bringing to bear their competitiveness on the international markets.”

He considered greater investment in infrastructure or innovation to be absolutely vital but this would not automatically result in other economies benefiting.

The fact that Germany’s export surplusses have been defying the Commission’s recommendations and warnings for years while the EU rejected Italy’s draft budet just this week, plays into the hands of populist parties. With the EU elections approaching, they speak of hypocrisy and criticise Germany’s alleged supremacy in the EU. Such rebellion again the “EU establishment”, as seen in Italy these days, could become a popular election campaign tactic, some say.

Nevertheless, Altmaier has revised downwards his forecast for the German economy – and also its trade balance. “The central risk is the further escalation of the global trade war, which could also hit German exports hard,” he said. Mentions were also made of Brexit and the economic crises in Turkey and Argentina.

Exporting a lot of goods means that the German economy is heavily dependent on international events. Industry representatives are accordingly concerned about Brexit.

In the event of a hard Brexit, which could involve tariffs, trade barriers and exchange rate effects, Germany could suffer heavy damage as an exporting country. The German Economic Institute has calculated that exports to the United Kingdom could initially decrease by up to 57%. 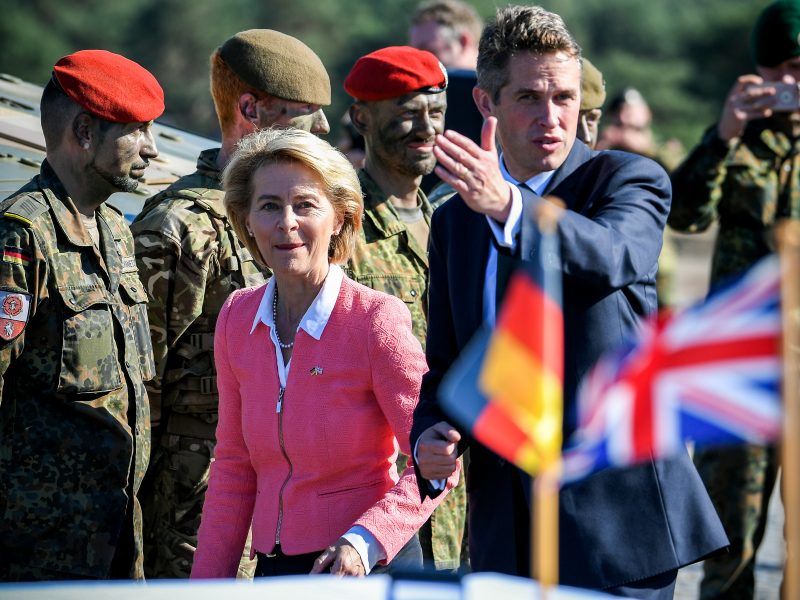 The question is what will happen to the German trade balance surplus – and will German products then be exported more strongly into other member states? This would be particularly bad for southern EU countries.

Finance expert Matthes considers such a scenario “tends to be possible” though he added that nobody could know for sure. “But I suspect that even the car industry would be able to adapt quite well. The German industry has proven to be relatively flexible.”

Despite the export sector’s vulnerability, Matthes said, the German economy is “relatively resistant to crises”.