German Socialist MEP Udo Bullmann praised the EU and US talks on trade relations. But in an interview with EURACTIV media partner Der Tagesspiegel, he also insisted that “we do not live in a command economy” and warned that the European Parliament will have to be involved with any future talks.

Udo Bullmann is the leader of the Progressive Alliance of Socialists and Democrats in the European Parliament.

Mr Bullmann, who prevailed in the trade talks in the White House – Commission President Juncker or US President Trump?

I would not speak of a victory for Juncker or Trump, but of a breather. In substance, not so much has changed: The US punitive tariffs on steel and aluminum are still in force. Conversely, the countervailing European duties persist. These tariffs hurt Trump very much because they directly hit his voters in the Midwest.

Through his trade policy, Trump is significantly under pressure. To his voters, he has given the false impression that trade wars are easy to win. In addition, due to his Russia policy, he is significantly under fire. Therefore, he now continues his zig-zag course and presents himself to his constituents as a “dealmaker”.

He seems to believe that with this he might be able to score points in the midterm elections in November. 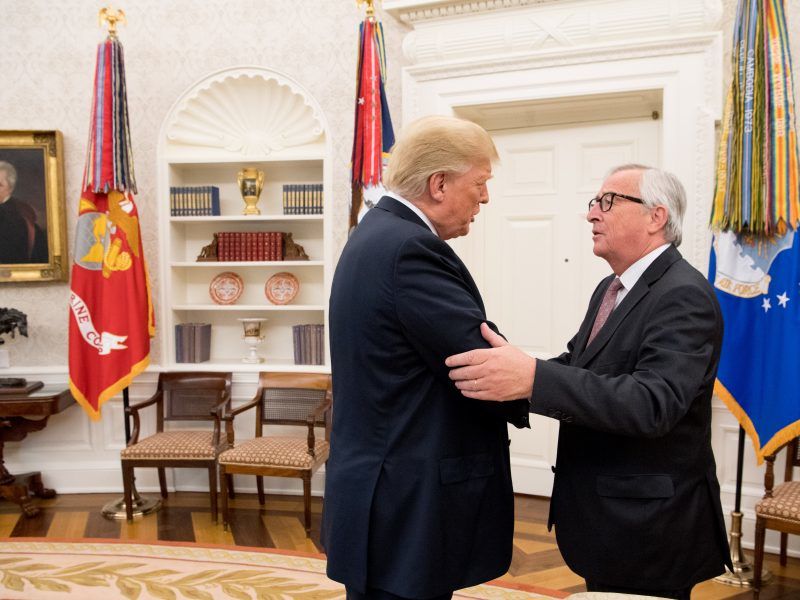 What has Juncker achieved then?

He can take up the cause that there might be no additional US punitive tariffs on car imports, as long as a trade agreement is negotiated. He himself got away with vague hints. He did not make real promises.

Europeans are about to import more soybeans from the US. Will that work?

Europeans are already doing that. The import of soya into the EU happens duty-free anyway. Of course, middlemen and traders in Europe can freely decide whether to buy soybeans from the Midwest or from Brazil. They will make market decisions and not listen to what Mr Juncker says. We do not live in a command economy.

In addition, Trump and Juncker have agreed that the Europeans should import more American LNG. What does this mean for Russia’s Nord Stream 2 project?

Again, these are ultimately market decisions. Whether gas suppliers in Europe rely on this or that source is often a price, competitiveness and security issue. Why should European utilities buy American liquefied gas as long as Gazprom’s supply is more competitive and considered safe by utilities?

Mr Juncker cannot force that, either. He can create the conditions for importing the infrastructure, which is already happening through the construction of LNG terminals.

A comprehensive tariff reduction for industrial goods and a reform of the World Trade Organisation (WTO) will be negotiated as well. How long would such talks take?

That does not seem to be clearly defined yet. That Europeans and Americans talk about how they want to further develop their trade relations, is good. But we do not see a mandate for the moment. Such serious conversations cannot be arranged during one meeting in the White House.

One thing is clear: If there were more serious talks, the European Parliament would come into play. In the end, trade agreements are not possible without our consent. The Parliament will have to have a say on the issue of a mandate for possible trade talks. Otherwise, any Commission before would have traded with lemons.

In addition, we very much welcome the fact that Trump wants to negotiate a reform of the WTO – if he is serious in the end. Because that would mean that he would support a multilateral system that he has repeatedly rejected in recent months.