This article is part of our special report How to protect workers’ rights in a volatile labour market?.

Digitalisation, climate change or automation are among the most worrying concerns the workers are facing now and will face in the future. However, in order to address these issues, the first thing to do is to “change the macroeconomic paradigm,” which is the base for the fragmentation of the labour market, Visentini argued.

While he acknowledged the important impact of digitalisation or climate change on the working conditions, he argued the market was already fragmented and working conditions were precarious due to traditional labour reforms in the past twenty years.

“This is an issue for Europe, of course, because we faced the financial crisis, austerity measures, constraints in the public sector, budget cuts in social protection, pension systems, workers’ rights, collective bargaining, wage… But it is more, in general, a problem for the whole world, because there is no multilateralism able to cope with these challenges if there is not a big change in the macroeconomic model,” the ETUC secretary-general said.

The “triangle in which the European social model was based” – social protection, collective bargaining and social dialogue- “was dismantled during the crisis,” he stressed.

“We have to come back to this but also imagine a different type of social model to cope with the challenges and the changes in the future,” Visentini emphasised. Phenomena such as digitalisation have only worsened the situation for workers.

Workers in platforms: the ultimate precarisation

In order to address these issues, trade unions need to find the way to get in touch with these people, Visentini said. Going to a workshop and organising an assembly to discuss with workers is no longer possible simply because there is no workspace.

“If we succeed in getting in touch with them, we have to listen,” Visentini insisted, because their problems, their questions are different. “The challenge is to rebuild the social protection system for traditional workers while addressing the needs of the non-workers too,” he argued.

“They are independent, they are self-employed but at the same time, they also need protection because they don’t have the power to bargain their tariffs, their incomes… and to have access to anything in terms of social protection,” ETUC secretary-general highlighted.

For platform workers to bargain, the first precondition is to understand who the employer is. “It is not possible for Uber and other companies to say “no, I am not the employer”, Visentini said. “They have to be recognised as employers and they have to negotiate,” he insisted.

Visentini defended the need for a legal framework at the European and national level to make sure the same level of rights applies to all workers, regardless of their sector, in line with the European Pillar of Social Rights. 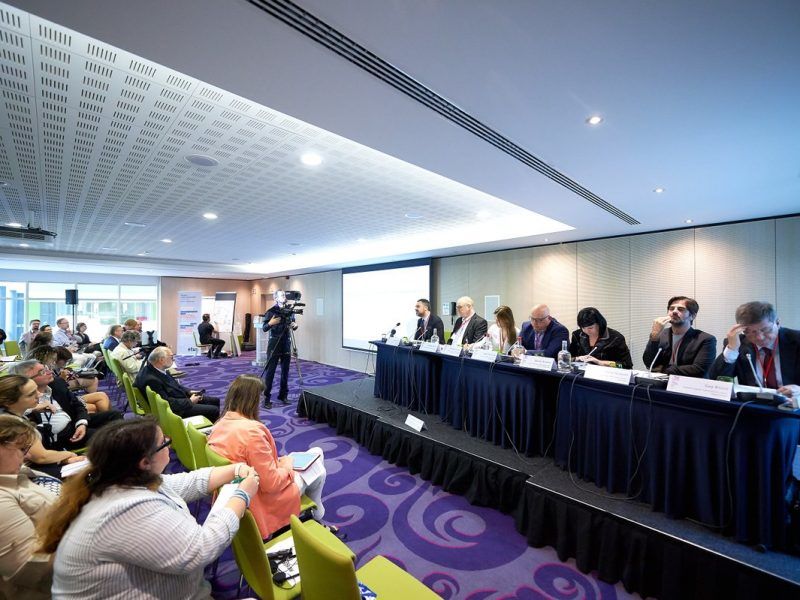 Fair transition to a greener economy

When it comes to a fair transition towards a greener economy, the secretary-general asked for a comprehensive approach, including resources and social dialogue, to accompany workers in the process and discard “palliative measures” which will not solve the problem once jobs are destroyed.

A just transition can only be possible if there is sustainable growth and job creation, he argued. “We can have the best-trained and best-skilled workers in the world but if there is no alternative to the jobs that have been destroyed, it will be an empty game”.

One of the main challenges in addressing just transition is the differences between member states but also within individual countries.

“Very often there is no capacity in the authorities there to manage the process,” the unionist said. “We need to make sure that we are in touch with the communities where there are difficulties for workers,” Visentini insisted.

As part of the new Multiannual Financial Framework, ETUC proposed to include a ‘Just transition fund’. Although the European Parliament welcomed the idea, the Commission has not included this provision in its proposal.

Visentini criticised the Commission’s proposal for a new long-term EU budget. “In terms of the European resources, we are not going in the right direction. “But there is still room for manoeuver to negotiate to improve the proposal”.

Visentini underlined that even if Cohesion policy in the new EU long-term budget has among its objectives working towards a greener economy, “the labour dimension is very poorly considered and the resources available are less than expected”.

He argued that this is partly the result of an “institutional” and “financial” conflict, with the Commission trying to enhance a fair transition on the one side, and the member states, not as willing to do so, on the other.

“We still have an institutional conflict, even at European level, when it comes to the introduction of a European framework for just transition. And this is probably why the EU is behind in addressing this issue,” Visentini highlighted.

For the secretary-general, the key is “to make sure that when the European Union transposes all these commitments into the European law, they are consistent.”

A migration wave in an ageing society

Taking a different view from many who argue that Europe cannot welcome more people, Visentini stressed that “in the medium and long term we will need lots of migrants, even more than already came to fill our labour market shortages.”

The trade unions have been active when it comes to integration of migrants in the labour market. Public authorities, social partners and employers and trade unions, all together should pave the way for migrants to integrate.

“It is essential to prevent any negative reactions among the native workers towards the migrants and the only way is to make sure equal treatment, that there is no exploitation of migrants,” Visentini stressed.

The only way to combat the fear “is to make sure that everybody can have a decent job, with a decent salary, on equal conditions,” the trade unionist insisted.

Visentini praised the relation established by the Juncker Commission with the social partners and highlighted close cooperation with Commissioners Marianne Thyssen and Vice-president Valdis Dombrovskis.

“When it comes to other policies, like Competition Law, Trade or the Digital Agenda… we still struggle to establish a proper social dialogue,” he said.