Martina Larkin: "Connecting transport infrastructure has the potential to deepen integration and cooperation through trade and is also an area where the private sector can play an active role." [world Economic Forum/Flickr]

The Western Balkans’ very strategic location and entrepreneurial labour force are some of the assets that could help the region take advantage of the Fourth Industrial Revolution and take its destiny in its own hands, Martina Larkin of the World Economic Forum told EURACTIV.com in an interview.

Martina Larkin is the head of Europe and Eurasia and a member of the Executive Committee of the World Economic Forum.

She spoke to EURACTIV’s Sarantis Michalopoulos ahead of a Strategic Dialogue on the Western Balkans, which will kick off in Sofia alongside the EU Summit on 17 May.

According to the WEF, the main objective is to bring together regional heads of government and heads of international and local businesses in order to drive forward economic integration and transformation focusing on three key areas: deepening trade links, engaging a new generation of leaders and developing a digital ecosystem to enable the Fourth Industrial Revolution. 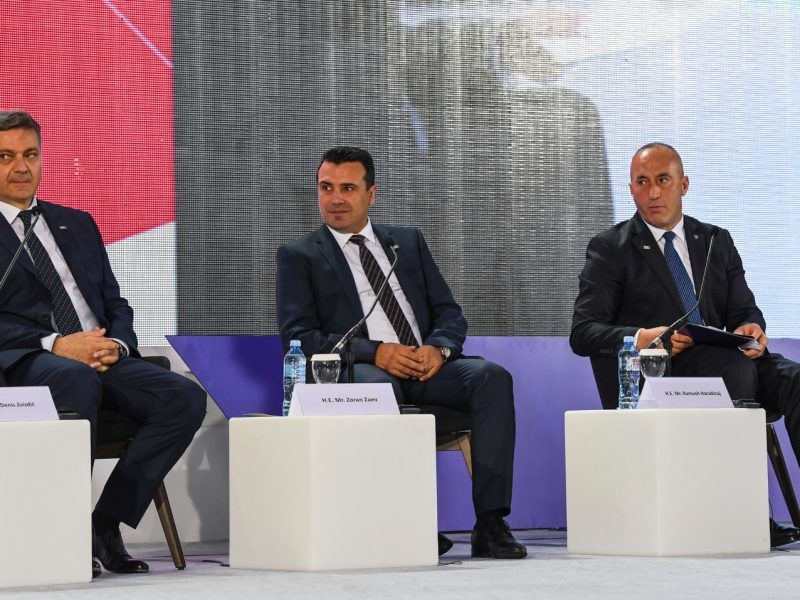 Where do you think should be the focus of the public-private partnerships? Is there a specific roadmap? In which sector does the region have a common potential?

Since we convened the leaders of the Western Balkans in Davos at our Annual Meeting, it has become clear that there is a willingness to work together to bring greater stability to the region and address longer-term issues. We are very happy to support this momentum. The role of the private sector is crucial to advance any cooperation and the private-public partnerships to advance growth and investment will be a key agenda topic on Thursday. One obvious cross-border issue to start with is connecting transport infrastructure: this has the potential to deepen integration and cooperation through trade and is also an area where the private sector can play an active role.

You recently talked about “external pressures”. Is there any political rationale behind this move? Do you believe such a project could decrease Russia’s influence in the region in the long run? And why now?

This Dialogue is about helping the region achieve stability and building the foundations for sustainable, inclusive growth. This stability is necessary to ensure that the region’s economies are competitive should they accede to the EU but more importantly it is about giving the region more control over its destiny. This will only be achieved by tackling deep-seated structural concerns such as long-term unemployment, weak institutions, corruption and organized crime that continue to plague the region.

Are the leaders of these countries determined to move forward with the project?

What I find most encouraging about this dialogue we are entering is that it is very much led by the region’s leaders themselves. Having convened for the first time at our Annual Meeting in 2018, we are now at the stage where we can start turning words into action. To this end, we will focus on the main agenda points; deepening trade and investment through the public-private partnership, empowering the next generation of leaders and building out a digital ecosystem to enable the region to compete in the Fourth Industrial Revolution.

How could this initiative tackle the increased corruption in most of these countries?

Last year the World Economic Forum conducted a survey among 31,000 millennials from 180 countries, which we think makes it the most diverse survey of young people in the world. The stand-out finding of this study for me was that today’s young people view government accountability and corruption as the number one concern in their country. The Western Balkans is part of this global movement and I take great encouragement from the fact that enabling the next generation of leaders is among the three agenda items during our dialogue. Of course, this is only the start; the region’s leaders will be judged on their accomplishments, but I am very pleased that this issue will be at the heart of the discussion.

Considering that the EU itself cannot halt the brain drain of its own young people, how will you manage to do that for Western Balkans?

The Western Balkans has many assets, a very strategic location and entrepreneurial labour force among them. I actually believe that they are well placed to take advantage of the Fourth Industrial Revolution in the same way that the Baltic States were able to rapidly develop their economies on the back of the internet economy in the 1990s. Smaller economies often have the advantage of making big changes with more agility than larger ones.

Can this project accelerate the EU accession process of these countries?

There is of course political will in Brussels for the Western Balkans Six to join the Union. Many of the initiatives that we hope will stem from this project will help these economies build up their competitiveness so that they can thrive post-accession. But we are focused on the long-term; the structural reforms the region needs to undertake are essential whatever path they take. EU accession, if it happens, will not translate into broad gains for the region unless they are able to compete and hold onto their endowments of human capital.

What is your main fear when it comes to the implementation of the project?

We have had very good momentum building on from our Annual Meeting in January: it will be key to keep these energy levels high and deliver on the progress, which is very possible. The World Economic Forum is the platform for discussions but the impact has to be driven from within the region. We have great support from within the region but also from key partners, for example, Vice President Mogherini and [Austrian] Chancellor Kurz who will join the meeting alongside Prime Minister Borissov, and I believe there is real will to succeed: as an international organisation with a mandate to improve the world through public-private cooperation, we are ready to help our partners during this transformative process.