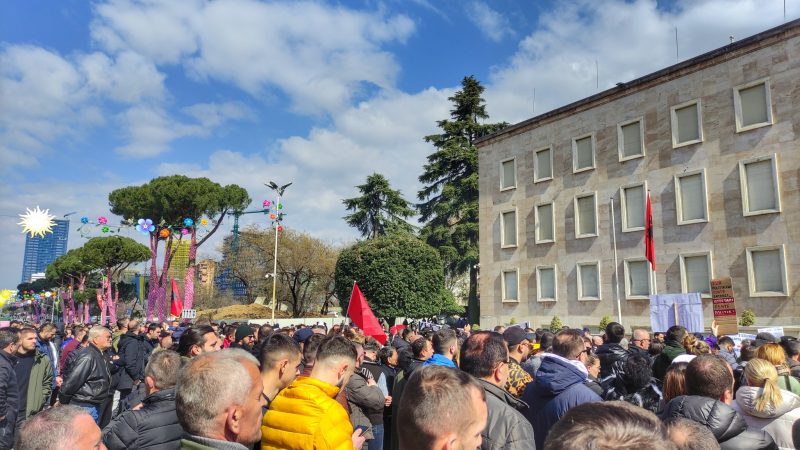 Albanians protesting in central Tirana over 40% increases in the cost of fuel and foodstuffs. As one of Europe's poorest countries, they call for more government support. Photo: Alice Taylor

Albanians have been protesting for more than a week over price increases of food, fuel, and energy. The government, however, has called them a national shame and said their protests were serving Russia and the Kremlin – a claim activists have entirely dismissed.

The national statistic institute, INSTAT, found that the cost of 30 essential food items has increased by 40% from January 2022, including meat, dairy products, cooking oils, and fruit and vegetables. The fuel cost has increased by 40%, and some struggle to pay increased energy bills.

The protests across the country have brought together students, farmers, activists, and ordinary citizens in some of the largest non-partisan demonstrations in recent years. The protestors say the increased cost of food items, fuel and electricity are too much for one of Europe’s poorest nations, where a third live below the poverty line.

Prime Minister Edi Rama has said protestors are rallying against the consequences of the war in Ukraine, which then developed into claims that protestors are being paid to protest and are “serving Putin”.

At one point, Rama even said – just one day before the EU’s chief diplomat Josep Borrell arrived in Tirana on Tuesday (15 March) – that a “Brussels official” had told him protesters were helping the cause of Russia and wanted to know “who is organising them?”.

One of the organisers, scholar, journalist and activist Rezearta Caushaj, told EURACTIV, “I am in no way supported, influenced or linked to Russia or anyone linked to Russia. I do not support the Russian invasion or any other country’s invasion.”

“As a person whose family is dependent on two wages that will soon lose their value, I felt insecure enough about the future to react,” she explained, adding that her extended family, including pensioners and those with disabilities, are in an even more precarious situation.” 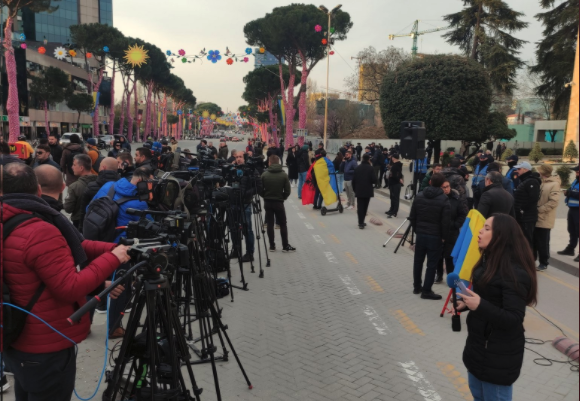 Albanians with the Ukrainian flag before a recent protest in Tirana. Photo: Alice Taylor

While the government has taken some steps to protect society’s most vulnerable, protestors argue that the increases in costs will force even those who were not at risk of poverty before to choose between feeding their families or keeping their homes warm.

EURACTIV asked the Commission whether they believed that Albanian citizens were bolstering Moscow but no response was received at the time of publication. 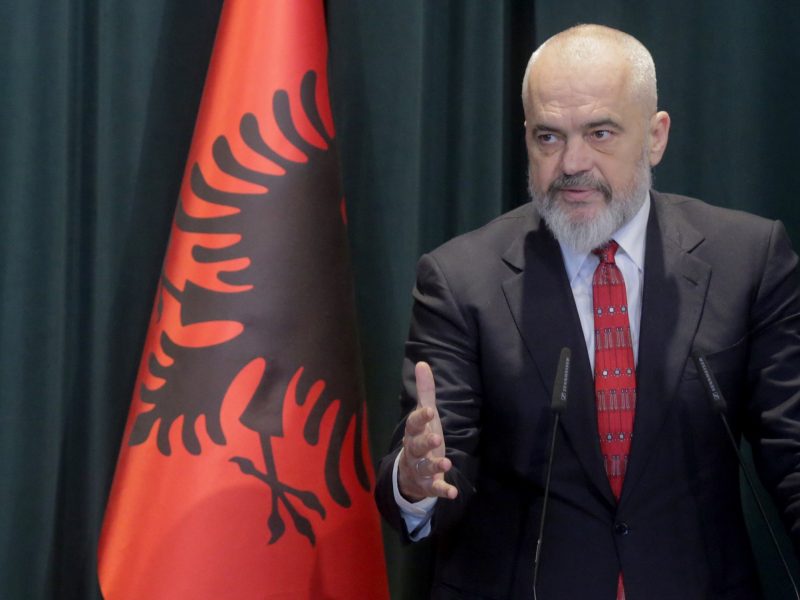 As the sixth consecutive day of nationwide non-partisan protests against high taxes and government corruption took place in Tirana, Prime Minister Edi Rama has said an official in Brussels told him these protests are in favour of Russia.

Protestors believe the government’s accusations come from a desire to deflect from their other complaints – that Albanian politicians are allowing market manipulation at the behest of powerful oligarchs and are involved in corruption and financial crimes.

According to several reports, including Transparency International, Albania is considered at significant risk of state capture and undue influence of the business elite.

Organizata Politike, a left-wing civil society movement involved in organising the protests, also told EURACTIV they had nothing to do with Russia.

“We categorically condemn the invasion of Ukraine by Vladimir Putin, and we stand in solidarity with the Ukrainian people who fight for their freedom.”

Instead, they said, they are protesting in the hope of “challenging the consolidated ruling elite in cahoots with a few oligarchs”.

They also warned that a 40% increase in fuel prices, equivalent to 20% of an Albanian daily income, is unacceptable.

“It is a speculative manoeuvre by Edi Rama and the oligarchs who control the fuel industry in Albania. This has caused a general increase in the prices of the basket of goods, something which we consider as criminal in a country where one-third of the population lives below the poverty line, with the lowest minimum wage in the region,” a spokesperson explained. 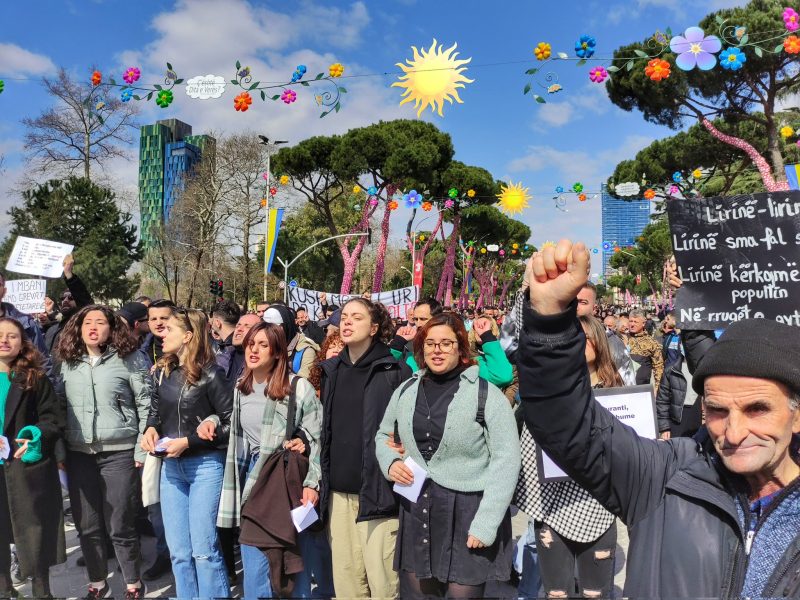 Albanians should be ashamed as they are the only NATO member protesting the “consequences of war in Ukraine”, said Prime Minister Edi Rama as nationwide demonstrations continued for the fifth day.

Citizens, however, say they are not protesting anything to do …

They criticised the government for a series of inadequate responses – to the 2019 earthquake that killed 51 people, the COVID-19 pandemic, and now the fallout from the war.

“The general feeling of frustration in Albania comes from many years of being robbed of public resources for the profit of a few individuals, as well as general incompetence from the government in managing the crises. At last, the people are reacting,” they added. 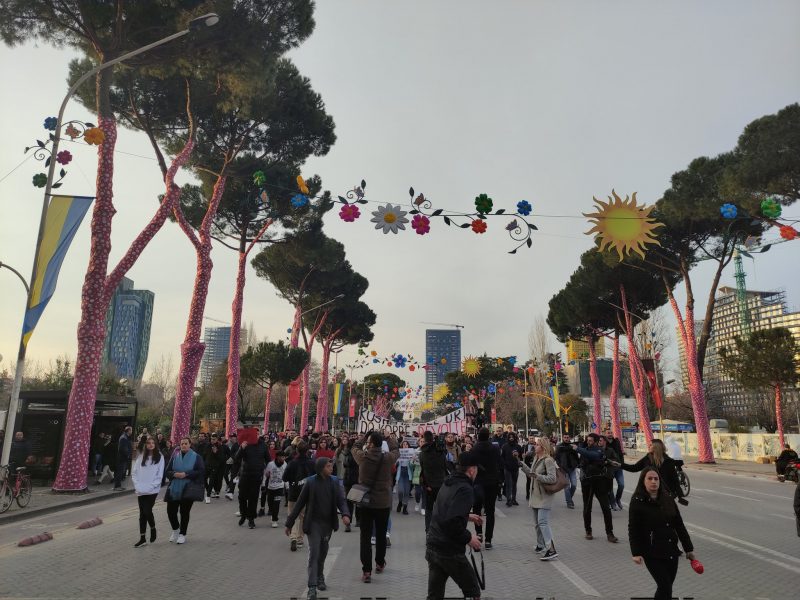 A coalition of 18 civil society organisations as well as journalists has called on the Albanian police to stop using violence against protestors and respect the human rights of assembly following an increase in incidents.

The call comes after police were …