File photo. US President Donald Trump (R) and China's President Xi Jinping arrive at a state dinner at the Great Hall of the People in Beijing, China, 9 November 2017. [Pool/EPA/EFE]

With global growth increasingly suffering from frictions between the two biggest economies, tensions will come to a head when Donald Trump and Xi Jingping meet on the sidelines of the G20 summit in Argentina (30 November-1 December).

Washington is set to raise tariffs on $200 billion worth of Chinese imports to 25% from 10% in January if there is no agreement.

“We are optimistic about the summit as an opportunity to avoid further escalation, but not to pull back already announced tariffs,” UBS economists wrote in a research note.

They said that time was simply running out before the end of the year to come up with a different tariff schedule.

Washington accuses Beijing of not playing fairly on trade while China says the United States is being protectionist.

“If no deal is reached, investors should come to realize that tariffs are no longer a bargaining chip to bring China to the negotiation table,” Daiwa Capital Markets analyst Kevin Lai wrote in a research note.

“Rather, tariffs are becoming part of a longer-term strategy to unplug China from globalization, contain its economic power (and hence its soft and hard power altogether) and give the US greater strategic advantage,” he added.

The OECD warned this week that a full-blown trade war between China and the United States could knock global growth 0.8% lower by 2021, and even more for the two countries.

“Trade is the biggest threat to our economic outlook and the lack of dialogues is a very high concern to us,” OECD chief economist Laurence Boone said as she presented a downgraded global growth forecast on Wednesday.

Though the fallout from the China-US standoff is hitting other regions as well, in Europe Brexit will also occupy minds as British Prime Minister Theresa May struggles to win backing for Britain’s EU withdrawal treaty.

Securing the backing of the 27 other European Union governments in Brussels on Sunday is only a first hurdle, as a bigger obstacle looms in early December when May will seek the UK parliament’s backing. 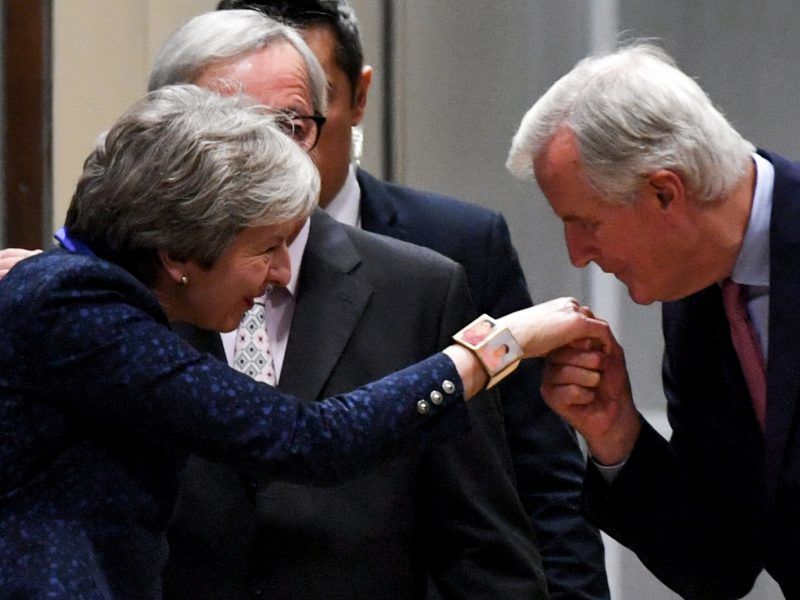 “This conclusion – that the base case is that the (House of) Commons will vote against the deal – is rapidly becoming something approaching a consensus in London,” TS Lombard analyst Constantine Fraser wrote in a research note.

As geopolitical factors such as trade frictions and Brexit cloud the economic outlook, central bankers’ speeches next week will be scrutinized for any hint of a rethink about their monetary policy paths.

Fed Chairman Jerome Powell is due to speak on Wednesday in New York and the president of the European Central Bank, Mario Draghi, takes his turn on Thursday in Frankfurt.

With little in the way of market-moving data during the week, news headlines are more likely to drive the risk appetite of investors, already on the defensive after recent bouts of market volatility.