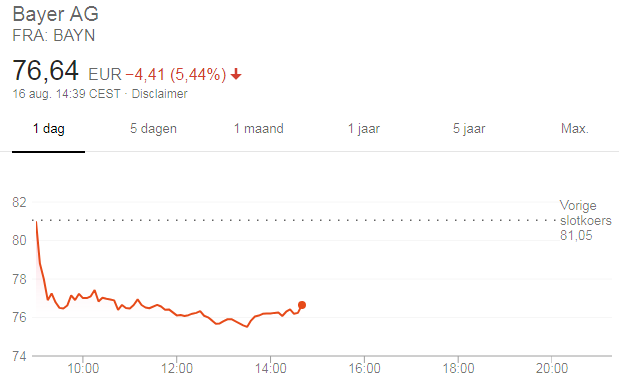 On 10 August, a California state jury ordered US-based Monsanto to pay $289 million in damages to Dewayne Lee Johnson, a former groundskeeper for the Benicia Unified School District in the San Francisco Bay area, who has been diagnosed with non-Hodgkin lymphoma.

He attributes his condition to the company’s proprietary herbicide glyphosate he used.

“The verdict is contrary to scientific evidence that shows there is no link between the use of glyphosate and non-Hodgkin’s lymphoma,” a Bayer spokesperson said.

On 7 June, Bayer sealed a $63-billion merger with Monsanto, creating an agrichemical juggernaut.

“There are big worries that similar lawsuits are soon to emerge that might further affect Bayer. Monsanto said it is aware of about 5,200 cases where plaintiffs claim that they have been exposed to glyphosate-based products,” one trader in Frankfurt told EURACTIV on condition of anonymity.

He said many banks had lowered their price target for the Bayer shares at the start of the week because they fear more legal suits.

The trader also referred to a report published today in the German economic daily Wirtschaftswoche, according to which Monsanto is also threatened with other million penalties in the US because of the weed killer Dicamba. Farmers in Arkansas and South Dakota have reportedly filed class action lawsuits in St. Louis.

Since a record high of €144 in April 2015, Bayer has lost almost half of its market value, or about 16 billion euros. For Bayer CEO Werner Baumann, who pulled off the largest takeover of a German company abroad against numerous obstacles, the company’s stock price decline is slowly becoming critical.

When he announced in May 2016 that Bayer was considering the acquisition of Monsanto, the company’s shares were listed at around 100 euros.