Pierre-Olivier Bergeron: "EU Commissioner Thierry Breton has done an incredibly good job and has been giving a lot of phone calls to member states to keep their doors open for green lanes etc […] The same could apply to Commissioners Gentiloni and Dombrovskis on alcohol VAT and the relevant EU legislation.” [Shutterstock/Minerva Studio]

Lowering VAT rates on alcohol across Europe would tremendously help the hospitality sector’s efforts to turn the business around quickly and eventually recover from the disastrous economic impact of the COVID-19 pandemic, according to the Brewers of Europe.

“If Germany is able to lower VAT from 19 to 16%, then other member states could do the same,” Pierre-Olivier Bergeron, the secretary-general of the Brewers of Europe, told EURACTIV in an interview

Europe’s hospitality sector, which mainly consists of SMEs, has been hit hard by the lockdown imposed across the continent slow down the spread of COVID-19.

Bars, pubs and restaurants are often seen as a way to connect people and many believe that in the post-pandemic era, they may play a crucial role in people’s return to social normality.

However, a lot of these businesses are struggling to recover after the lockdown and are seeking ways to recover rapidly and return to normality as tourism season is also gradually re-opening.

Nevertheless, bars and restaurants will still not be able to work at full capacity for a certain period of time, as a number of safety measures will have to be in place, such as social distancing.

Some member states have already applied lower VAT rates on food and non-alcoholic beverages and, in certain instances, on alcohol.

One such example is the German government, which recently decided to lower VAT on alcohol from 19% to 16%. For the Brewers of Europe, this is a “creative” move that should be followed by others.

The legislation is there

He called on the EU executive to take initiatives in this direction as it has already successfully done with the economy by encouraging EU governments to keep borders open as much as possible.

“EU Commissioner Thierry Breton has done an incredibly good job and has been giving a lot of phone calls to member states to keep their doors open for green lanes etc […] The same could apply to Commissioners Gentiloni and Dombrovskis on alcohol VAT and the relevant EU legislation,” he said. 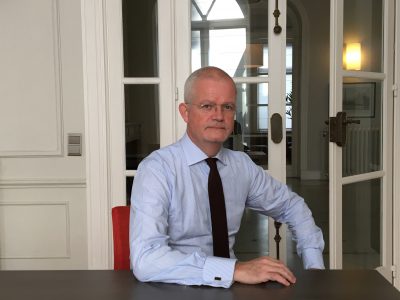 Pierre-Olivier Bergeron, the Secretary General of the Brewers of Europe

Asked how the state could benefit from lowered VAT rates on alcohol he replied: “I can provide you with myriads of examples […] whenever governments took the bold decision to lower indirect taxation, in particular on beer, state revenue has automatically increased. This has been my experience for the past 15 years”.

According to estimates, Europe’s beer sector has lost one-third of its market due to confinement measures and the impact has been particularly apparent on small breweries which have not been able to reach out to the market.

“Back in December 2019, I was able to report that Europe accounted for more than 10,000 breweries. I think that in one year’s time, I will not likely be able to report this number. So, there’s going to be some damage,” he warned.

In the last couple of weeks, organisations representing the hospitality sector and food and drink industry have sent a number of letters to EU institutions asking for immediate action.

FoodDrinkEurope, which represents EU food and drink manufacturers, told EURACTIV that in general, businesses in the hospitality-tourism sector have benefited from EU and national measures taken in response to the COVID-19 crisis, including liquidity support and fiscal relief.

“In addition, we’ve called on the Commission to remind member states of the existing possibility to apply reduced VAT rates on certain food and drink products, which – if applied as appropriate – would support consumer demand to help rebuild the sector,” FoodDrinkEurope said in an emailed response.

The Recovery Plan recently proposed by the EU executive offers a number of tools, both grants and loans, to Europe’s SMEs to cope with the COVID-19’s impact.

Although grants feature more prominently than loans in the Commission’s proposal, critics suggest that the pressure of the so-called “frugal” countries, which are pushing for loans, may ultimately change the final balance.

European SMEs fear taking out more loans, as this would increase private debt and not all of them are able to afford it.

French talk about beers too, not only wine

Referring to the lessons from this pandemic, Bergeron admitted that there were also positive elements.

For the first time, he heard EU officials and heads of governments talking about bars and cafes as being part of the social fabric of Europe.

“I heard the French prime minister talking about beer as much as he was talking about wine, for example, and you know, the French culture is very much wine-focused. So there are things that are moving in the right direction,” Bergeron concluded.