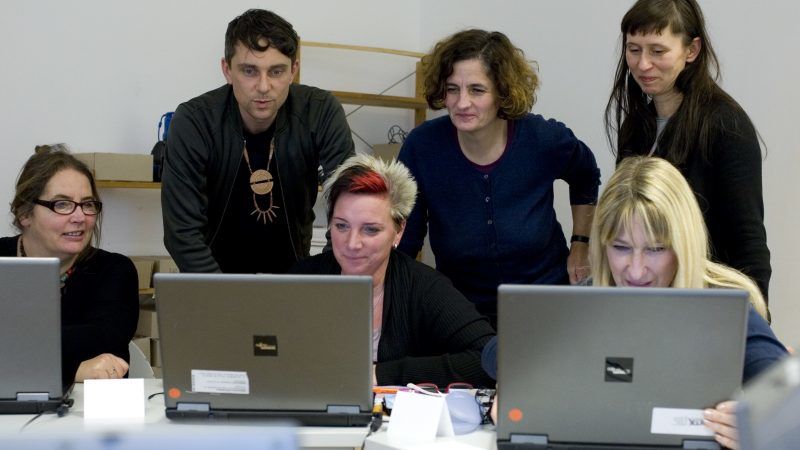 Participants of the Minecraft class in Berlin. [Florence Schulz/EURACTIV]

Berlin, the borough of Mitte: A dozen people of mixed ages sit in a room full of computers and play Minecraft. The aim is to learn what the open source game can be used for. The participants are guided by an employee of the WeTeK training centre, who will show them how to use computer games for working with young people. EURACTIV.de reports.

The Minecraft-class is part of a project on media education for social educators offered by WeTeK, a Berlin-based project,  with funding from the European Social Fund (ESF).

The ESF finances more than 600 projects on qualification, integration, culture and combating youth unemployment in Berlin. In the current ESF funding period (2014-2020), the Bundesland of Berlin has approximately €215 million at its disposal.

The media education at WeTeK aims to impart digital skills to child and youth carers. Anyone working in day-care centres, schools or with young people in assisted living must understand the generation of digital natives as well as how they use media.

After all, it is difficult to teach children how to use digital media responsibly if one’s own technological knowledge is insufficient.

Computers and mobile phones can be used in many ways for creative work with children, especially in class: “Nowadays it is incredibly important to teach media skills to the children. But which parent sits down and says: today we will make a podcast. This is why we train our course participants,” explains Steffi Winkler, the coordinator of the media class.

But the project is about much more, she underlines: “The educators should also be able to teach the children things, for example how to make a good PowerPoint presentation or how to research information correctly; that there are more hits than the first three on Google.”

The project, therefore, offers a wide range of courses: from audio and video-editing software to courses on hate speech or the role models of girls on the net. How much media knowledge educators bring along often depends on age – and the discrepancies are large.

“Older educators and teachers often have to learn that computer games are not always bad, even shooting games. Younger people, on the other hand, know such things; they rather have to keep a critical eye on children’s media consumption,” explains Gordon Schmid from the computer game addiction counselling service of Caritas in Berlin.

Media misuse and hyperconnectedness are important points in pedagogical work nowadays, he underlines. Today, 81 percent of ten to eleven-year-olds surf the Internet several times a week, according to the International Central Institute for Youth and Educational Television (IZI).

Educators are thus required to recognise unhealthy media behaviour and to counter it in due time.

“In the end, it is also about respect and understanding between carers and young people. For example, educators need to understand that computer games are important [to the youths] and that you can’t always just stop right in the middle but you first have to finish a round. You wouldn’t call the child off the pitch in the middle of a football match either. It’s about understanding the children’s priorities,” Schmid believes.

The media education of WeTeK, therefore, teaches educators to use computer games and the Internet as a creative addition in their work with children and young people. Almost 50,000 lessons have been given since the start of the project in 2016, and more than 1,300 teachers have been trained free of charge.

The media project is financed in equal parts by the Bundesland of Berlin and the ESF. Project Manager Steffi Winkler recollects that submitting the applications for EU funding – which are feared because of their size and scope – was like writing a doctoral thesis, especially regarding the content, as the concept had to be presented very clearly.

However, the project would not have come about in the first place without the availability of EU funds, Winkler emphasizes.

This funding has enabled WeTeK to create a very important offer: “Teachers must know how to approach a child or a young person. You have to pick up where you can reach the child – and today, that’s on the computer or mobile phone.”