Updated with the European Union of the Deaf Youth comments.

The European Commission reserves the right to approve the final financial report and to audit the expenses of an EU-funded youth conference that took place in Sofia on 17-19 April, a Commission official who asked not to be named told EURACTIV.

EURACTIV.com reported on 23 April that a youth conference organised by the Bulgarian Presidency in Sofia triggered strong reactions from its participants, who accused the Bulgarian government of mismanagement and inappropriate behaviour.

Luis Alvarado, the president of the European Youth Forum, accused the Sofia event of “destroying the work of generations before us and disregarding young people at all cost”.

In particular, young people from Bulgaria and youth organisations across Europe said that they were excluded from the panels of the conference; volunteers were “forced” to applaud during Prime Minister Boyko Borissov’s speech; flight tickets were not pre-booked as is the usual process but will be reimbursed at a later stage; and there was complimentary hard alcohol served at night, including vodka. 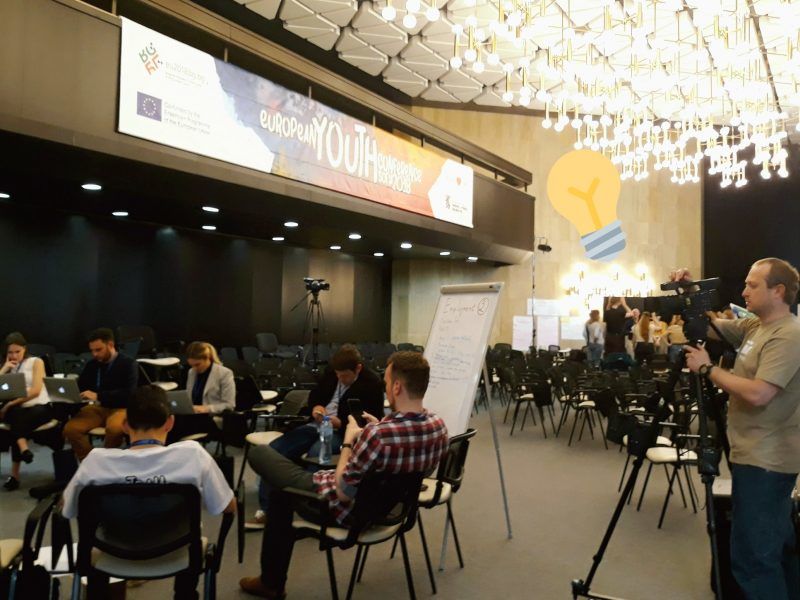 EURACTIV contacted the European Commission for comment on the topics raised by the participants, as the EU executive provided the grant money.

A Commission official, who asked not to be named, insisted that young people were prominently present throughout the conference and in all discussions.

For the Commission, only the closing ceremony was set up a bit differently, in line with established practice.

‘Present, but not on stage’

“Here, young people’s representatives present the outcome of their work (so-called Youth Goals that emerge from the work of the previous three days) to decision-makers (Council Presidency and Commission). They were present in the audience, though not on the stage.”

The EU executive was also asked if it has a mechanism to monitor where EU money is spent when it comes to the organisation of these kind of events.

“The Commission is not involved in and its grant agreement does not cover the possible night parties that take place in the margins of the EU Youth Conference,” the official explained.

They added that the Commission grant agreement for the EU Youth Conference only provides for financial support for meals and coffee breaks.

“At the formal conference meals, no vodka was served, only a modest quantity of table wine,” EURACTIV was told.

EURACTIV was informed that the Commission monitors the spending of the grant based on a report from the Council Presidency as grant holder. This process is ruled by the Financial Regulation.

The ruling party of Boyko Borissov on Tuesday (24 April) waded into the affair.

Toma Bikov, a GERB politician, said on national channel BNT that Luis Alvarado did not even attend the event he denounced. Bikov added that he got this information “from very good sources”, an allusion to the secret services.

It is hard to explain why Bikov offered up such an explanation considering Alvarado’s attendance was documented in video footage and on social media.

The leader of the largest opposition party, Kornelia Ninova (Bulgarian Socialist Party), said what happened at the Sofia conference was a “slap in the face of Bulgaria by the young Europeans”.

“This part of the story about alcohol and half-naked women is terrible, but more important is what the president of the European Youth Forum said has happened in Sofia, namely that the work of the generations of young politicians was demolished and that complete disregard for young people, in general, was demonstrated,” Ninova said.

She pointed out that at the conference “there was no talk of policies for young people, there was not a single young person on the panels in which the discussion was held, instead, state officials appeared to hold speeches and young people were asked to stand up and applaud”.

The EU Youth Conference is a “success that cannot be forgiven by the opposition”, claimed Georg Georgiev,  deputy minister of foreign affairs and a politician from the youth organisation of the ruling party GERB. He accused Alvarado of launching his attack with egoistic motivations.

“The leader of the youth forum in question apparently has started his campaign,” Georgiev said, quoted by national channel bTV, adding that he suspects Alvarado was promised support by his national structure for a next term of office in exchange for his attack.

Bulgarian TV also spoke to Alvarado, who rejected such claims.

“The European Youth Forum has a democratic structure that does not allow me to run again. I will not be re-elected. I spoke because it was right,” Alvarado explained.

Regarding alleged instructions that the volunteers working for the Bulgarian Presidency should stand up and applaud Prime Minister Boyko Borissov, bTV confirmed that they had received SMS messages with such an instruction.

But according to a volunteer interviewed by the TV channel, there was no problem, because she wanted to applaud Borissov anyway.

“We received an SMS saying that we should stand up and applaud Mr Boyko Borissov, but I want to boldly say that this is my personal choice,” volunteer Vilislava Metodieva said.

According to bTV, both the opposition and the government saw nothing wrong with the youth programme including a nightclub, even with stripped dancers.

Following the publication of this article, Commissioner Tibor Navracsics, in charge of Education, Culture, Youth and Sport, sent EURACTIV the following reaction: “The news published by EURACTIV on the Sofia Youth Conference is not true. It’s not true that I only stayed at the event for the time of my speech. On the contrary, at the event, I held a Citizens‘ Dialogue with the Bulgarian Youth Minister Krassen Kralev and Jayathma Wickramanayak, the UN Secretary General’s Youth Envoy. I gave the closing speech, and I attended a bilateral meeting with Alanna Armitage, Director of the United Nations Population Fund. Nor is it true that I did not speak to representatives of the European Youth Forum. During the Dialogue, I answered questions, listened to comments from the delegates, and I also spoke to youth delegates after the event. Overall, on that day, I spent three hours at this conference”.

Regarding the Commissioner’s presence at the event, EURACTIV only quoted Luis Alvarado, the President of the European Youth Forum. Full story here.

The European Union of the Deaf Youth, the Youth Organisation to the Union of the Deaf in Bulgaria and the Listen Up Foundation, issued on 25 April a statement saying that the Bulgarian Presidency did not ensure their inclusion.

“We  would  like  to  thank  the  Ministry  of  Youth  and  Sports  in  Bulgaria  for  inviting  deaf  delegates to take part in the European Youth Conference. The aim was to include youths from marginalised groups such as the deaf community. As they use sign language that is different from the main language of the European Conference, access was provided through sign language interpreting in order for them to receive information as other delegates. But, unfortunately, our inclusion turned out to be inadequate for the following reasons: