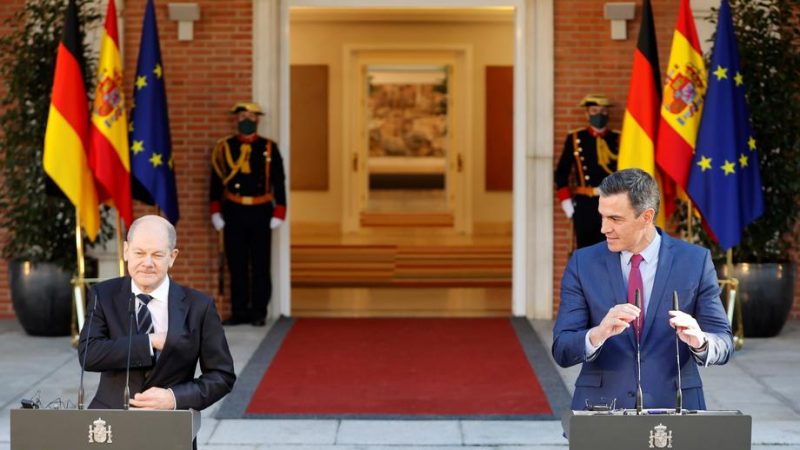 German Chancellor Olaf Scholz gave Spanish Socialist Prime Minister Pedro Sánchez no indication his left-leaning government is ready to support a relaxation of EU fiscal rules, even as the two agreed on Monday (17 January) to work closer together on European policies.

Sánchez had high expectations of Monday’s visit by Scholz, who took over from chancellor Angela Merkel last month, with sources saying he saw their closer “ideological fit” as a chance to rebuild Madrid-Berlin relations.

“The Chancellor and I note that we are entering a new phase in our cooperation at European level,” Sánchez told reporters after their meeting, citing a “shared vision with this new German government on social and economic progress.”

“We coincide (in the opinion) that the fiscal rules are too complex and hard to comply with”, especially in the context of the coronavirus pandemic, he said. But he added that the two countries were not aligned on how to change the rules, known as the European Stability and Growth Pact.

But Scholz, who leads a “traffic light” coalition with the Greens and liberal Free Democrats, said that while “Germany and Spain are close friends” enjoying good relations, it was too early to review the fiscal rules.

Scholz said the bulk of the €750 billion pandemic recovery fund, which was made possible under the existing stability pact, still remains to be spent.

European finance ministers were meeting on Monday to discuss when to return to the stability pact suspended during the pandemic.

Last month, after talks with French President Emmanuel Macron in Paris, Scholz said growth and solid finances are no contradiction and can be reached at the same time.

During the 2010 euro zone debt crisis, Germany was seen in Spain as a leading member of the northern European “frugals” that imposed financial restrictions and looked down on “spendthrift” southern neighbours.

Even without immediate progress, the Sánchez government sees Scholz’s visit as a start in breaking up of those two blocs, a Spanish senior government official said.

Spain has not joined the EU fiscal reform proposal launched recently by France and Italy, but still wants to change the debt limits set by the current fiscal rules.

“We need a new credible rule. Most of the big euro countries cannot meet the 60% target,” the Spanish source said.

Achim Post, the general secretary of the European parliament’s Socialist bloc and a prominent member of Scholz’s Social Democrats in Germany, noted that left-wing parties are now leading Spain, Portugal, Germany and the Nordic countries, and saw new scope for cooperation in Europe.