China expressed concerns on Tuesday (28 February) over what it said was increasing protectionism after European Union regulators imposed new duties on steel imports from the world’s biggest producer.

The European Commission is seeking to protect EU steelmakers while avoiding tensions with Beijing, which it sees as a possible ally against protectionism and climate change.

It imposed definitive anti-dumping duties of between 65.1% and 73.7% on imports of heavy plate non-alloy or other alloy steel from China, confirming provisional tariffs set in October.

China’s Commerce Ministry reacted calling on Europe to treat Chinese companies “fairly and impartially”, adding it was ready to strengthen communication with the EU to tackle issues in the industry.

China's steel capacity grew in 2016 despite promises of cuts

China increased its steelmaking capacity last year by more than twice Britain’s annual output, a report said on Monday (13 February), despite repeated pledges to cut huge excess in the sector.

The EU executive said it acted after an investigation found Chinese companies to be heavily dumping their products on the EU market by selling them at well below half of the price on the producers’ home market. The Commission opened its investigation in February 2016.

“The Commission has responded forcefully and quickly to unfair competition, while at the same time ensuring that the rights of all interested parties have been protected,” the Commission said in a statement.

Eurofer, which represents the European steel sector, said the Commission had found clear evidence of dumping. 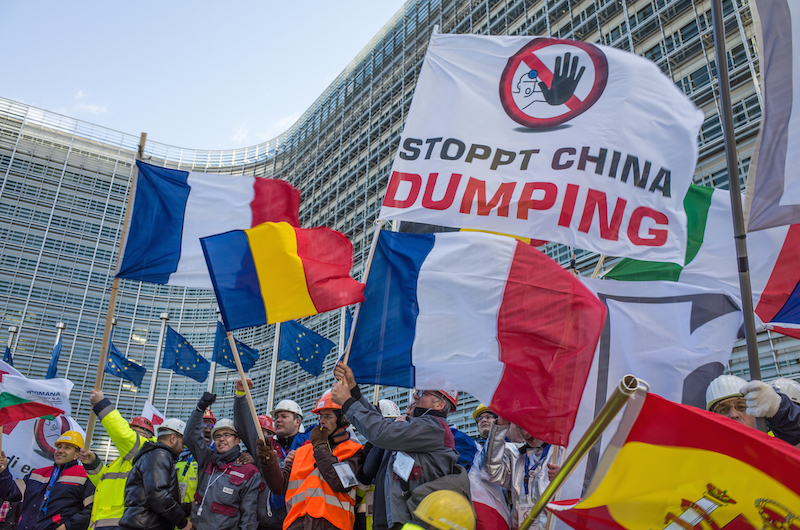 “Tens of thousands of steel jobs have been lost in Europe over the past few years, and dumping, particularly demonstrably from China, has been one of the causes,” it said in a statement.

The EU has strengthened its policy against what it considers unfair competition for its steel industry, and said its new approach had allowed it to decide on trade sanctions more quickly than in the past.

The EU currently has an unprecedented number of trade defence measures in place targeting unfair imports of steel products, with a total of 41 anti-dumping and anti-subsidy measures, 18 of which are on products coming from China.

“China’s government is focused on systemically weakening sectors that they have identified in their 5-year plan, with a view to engaging in strategic takeovers of foreign interests,” said Milan Nitzschke, spokesperson for AEGIS Europe, an alliance representing nearly 30 European associations representing a broad variety of manufacturing areas, including traditional industries, consumer branches, SMEs and renewable energy sectors.

The EU has a massive trade deficit with China, it remains for the second year at a record level of more than €170bn, which has led to hundreds of thousands of jobs and millions of euros of investments being lost across the EU.

The move by the European Council to impose anti-dumping and anti-subsidy duties with an average rate of 47.7% in late 2013 came following a two-year long investigation by the European Commission which found that Chinese solar panels were sold at below market prices.

A group of 26 companies subsequently challenged the decision at the Luxembourg-based General Court. Judges rejected the appeals.

“The General Court confirms the validity of anti-dumping and anti-subsidy measures for imports of solar panels from China,” the Luxembourg-based court said in a statement.

Since the 2013 decision, however, the Commission has softened its stance on the issue. Earlier this month, it proposed extending import duties on the panels by a shorter than initially proposed 18 months and eventually phasing them out.

The move underlines its desire to please EU solar panel makers and those benefiting from cheap imports as well as the desire to enlist China as an ally in fights against protectionism and climate change.