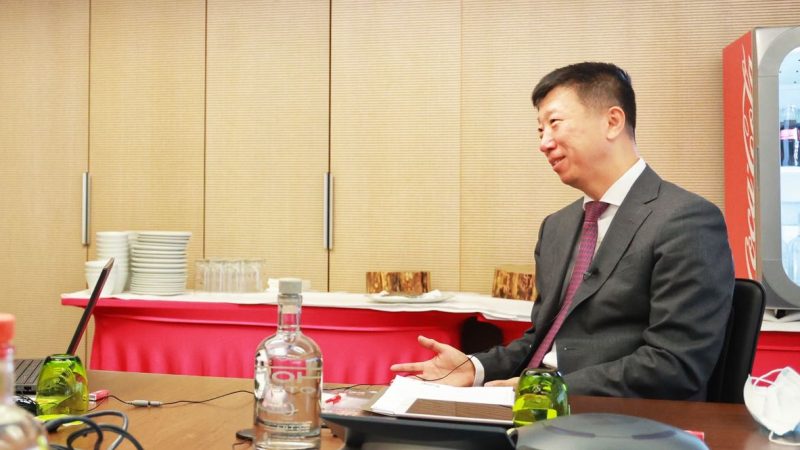 Xu Haifeng in the interview on 18 Octobre 2021 in Brussels. [CCCEU]

China wants more dialogue with Europe and a multilateral approach to climate measures, according to the chairman of the Chinese Chamber of Commerce to the EU. In an interview with EURACTIV, Xu Haifeng also detailed China’s data security law, which he said was the equivalent of the EU’s data protection rules.

He also said that the Chinese business community was not dependent on the Chinese Communist Party, pointing out that private businesses were more numerous than state-owned businesses in China.

Xu said 95% of the Chinese population are “satisfied or very satisfied with the central government”, adding it is a clear sign that people approve of and support the Communist Party.

He spoke to EURACTIV after the Chinese chamber of commerce to the EU (CCCEU) presented its report on the economic relations between China and the EU on Monday, (18 October).

The crisis around Evergrande showed some flaws in the Chinese growth model, namely its reliance on unproductive investment. How will China rethink its growth model and how will this impact trade with Europe?

Evergrande has concentrated its business in China and its domestic market. So, for the EU, the direct exposure to this company would be very limited. I also think that Evergrande is an individual case in the Chinese real estate sector. Its effects on the financial institutions are controllable, according to the Chinese Central Bank. In my opinion, the majority of the property market in China is stable. So, I don’t see the possibility that it will have an impact on China’s market structure or economic policies. Also, we see that China’s economy is strong currently, so we are pretty confident of the economic growth of China.

As the Chamber of Commerce, you are a part of the united front of the Chinese Communist Party (CCP). How are you advancing the goals of the CCP in Europe?

I can only see this in a very broad picture. For the last 40 years, China has had great growth and especially the lives of the people have been greatly improved. Now, more than 95% of Chinese citizens are satisfied or very satisfied with the central government. So I read this as approval for the CCP to lead. Given the economic achievements and the 800 million people who have been lifted out of extreme poverty in China, I really think that the Chinese people are approving of the party and of course the government.

The CCP’s central committee has called for the development of a “backbone of business people that can be relied on at critical moments.” At the same time, you say you want to increase trade and business with Europe. Why should Europe accept this, if these dependencies can be exploited politically by the CCP?

I don’t think there is a dependency on the party, since, in the Chinese business community, there are state-owned companies and private companies. 60% of GDP, 70% of innovation, 80% of urban employment, and 90% of companies are from the private sector. And, you know, for the economy to grow and for the people to have a better life, they need to improve and open up the market. The government should try to open the market. And when the companies go abroad to boost their trade between China and the EU, they can get better revenues and better lives. I think it’s not related to the party, but rather to businesspeople.

The ratification of the Comprehensive Agreement on Investment between China and the EU has been suspended after the Chinese government sanctioned members of the EU Parliament and European scholars. What do you expect from the EU now?

The business communities really hope that governments can have high-level dialogues to build mutual trust and boost mutual understanding on this. It’s really up to the two sides to decide how to move forward. But from the business community, we hope that this can go forward.

How do you evaluate the EU Commission’s proposal for a Carbon Border Adjustment Mechanism (CBAM)?

The EU’s intention is to prevent carbon leakage and to maintain the competitivity of European companies. But this poses questions, not only to China, but also other EU partners. So, I think it’s important to have communication and coordination with the multilateral conventions. There should be more dialogue with China and other trade parties to get better methods of dealing with these issues.

Does the CBAM provide an incentive for China to improve its climate policies?

Fortunately, China embraced a stricter policy and more incentives for the green transition. China will also coordinate with the Europeans to reinforce the fight for carbon neutrality. The CBAM is not the only measure we can take, I think we have many ways.

There has been quite a crackdown by the Chinese government on the tech sector, and Jack Ma (a billionaire businessman) was taken away for a while. How do you want to give European companies and investors confidence that they can trust the business environment in China?

For this, you have to know that China has more regulation on large tech companies. It’s really about the supervision of this sector to avoid monopolies and to have sustainable growth. Actually, China now also has a new data security law in force since September, which means that we have a personal information protection law like the GDPR in the EU. China and the EU need to coordinate to ensure cross-border data flow.

Yes. The personal information protection law is similar to the GDPR. It protects the privacy of the citizens and protects cross-border flows. It also regulates data trade or data exchanges.

You know, Xinjiang is a part of China, of course. So, yes, definitely.