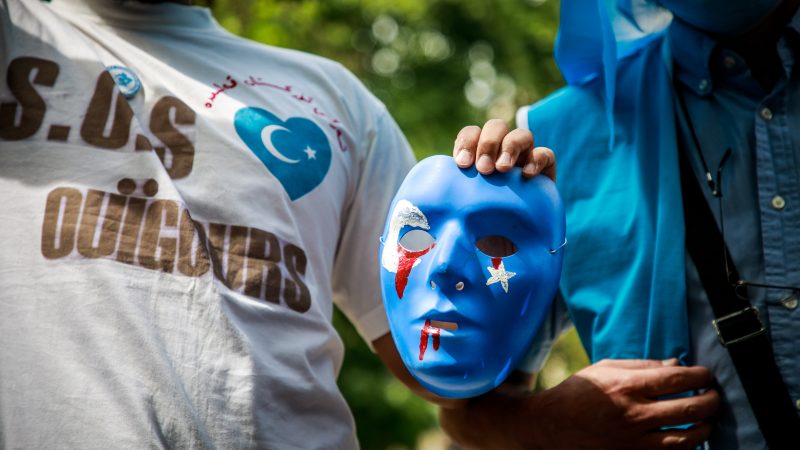 A demonstrator holds a mask decorated in the colors of the East Turkestan during a gathering against the persecution of the Muslim Uyghur community in Xinjiang province, near the Chinese embassy in Paris, France, 25 July 2020. epa08565635 [EPA-EFE/CHRISTOPHE PETIT TESSON]

In a report commissioned by the Chinese Chamber of Commerce to the EU and delivered by Roland Berger, a consultancy firm, Chinese companies called for a better business environment. The report claimed that the overall ease of doing business in the EU had decreased “drastically” for Chinese companies.

In particular, respondents said the political climate had deteriorated. They also pointed to the frozen ratification process of the investment agreement between China and the EU, the foreign investment screening mechanism, and supply chain due diligence rules as reasons for their assessment.

According to the report, “59% of Chinese enterprises believe that disinformation and misinformation pose a threat to their operations.”

Asked what kind of “disinformation and misinformation” companies were worried about, Roland Berger’s Bing Li, one of the report’s authors, remained vague but talked about “supply chain-related issues”.

One of the main “supply chain-related issues” in China that was often discussed in European media in the past year was the persecution and mass incarceration of Uyghur people in Xinjiang. In 2020, an investigative report found that the Chinese government forced Uyghur people to work “in factories that are in the supply chains of at least 82 well-known global brands[.]”

Multiple sources and investigative teams have corroborated the persecution of the Uyghur people. Nevertheless, the Chinese Communist Party keeps dismissing such reports as fake news.

Responding to this, the European parliament decided to put the ratification of the common agreement on investment (CAI) between China and the US on hold. Thus, the human rights violations by the Chinese government were among the main drivers of the deterioration of the political climate between the EU and China.

The report by the Chinese Chamber of Commerce and Roland Berger, however, omits these matters entirely. Even when it asks Chinese companies about the possible causes of negative public opinion in Europe towards China, actions by the Chinese government are not found amongst the answers. Instead, the report talks of media disinformation or “lack of mutual understanding and dialogue between China and the EU.”

A survey conducted by Sinofon in the fall of 2020 showed that more than 50% of citizens in most EU member states that were polled thought advancing human rights and democracy in China should be one of their countries’ foreign policy priorities. However, many EU citizens also thought that promoting trade and investment with China should be a priority.

Currently, EU policy on China seems to focus more on human rights than on the promotion of trade. In her speech on the state of the European Union this September, commission president Ursula von der Leyen announced that the commission would propose a ban on products made by forced labour.

The ban is a reaction to the reports of the persecution of Uyghur people and the exploitation of their forced labour by the Chinese government. Whether the next report on the business environment for Chinese companies in the EU will acknowledge this remains to be seen.