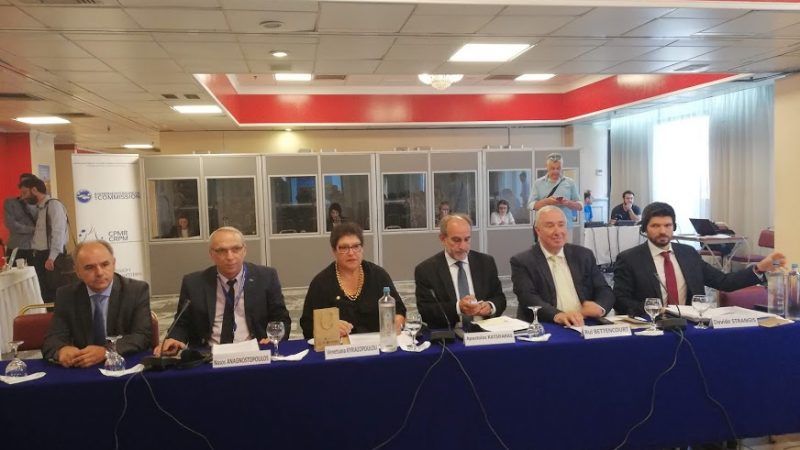 “The Mediterranean Sea is not just a geographical boundary, it unites people.”

That was the message of the Regional Governor of Western Greece, Apostolos Katsifaras, chairman of the Intermediterranean Committee of the CPMR.

“Above the Mediterranean, a multi-level framework for cooperation is being created, which can strengthen partnerships and sustainable development across the region,” he added.

Representatives from 24 Mediterranean regions met in Patras for the two-day General Assembly of the CPMR’s Intermediterranean Committee to discuss with key EU officials issues regarding economy, youth, immigration and sustainable tourism with a particular emphasis in Cohesion Policy.

Katsifaras, who was re-elected president of the Committee, said: “We are dealing with emerging strategies, territorial cooperation, multi-level governance, energy, economic and social cohesion, transport, immigration and Mediterranean identity. However, we are not limited to political dialogue, but we are implementing actions and providing support to the wider Mediterranean region”.

The priorities of the Intermediterranean Committee for the period 2018-2020 include promoting blue growth, and protecting the Mediterranean as a cultural, economic and productive area.

It also plans to address inequalities and the intra-geographical/European gap, as well as the immigration and asylum system, in order to strengthen the role of the Mediterranean regions.

For her part, the advisor of the Provence, Alps and the Côte d’Azur Region and president of the Euro-Mediterranean Commission, Agnes Rampal, underlined the importance of expanding transnational cooperation.

Changes in Cohesion affect the future of regions

With regard to the European Commission’s new Cohesion Policy proposal for the 2021-2027 budget, the CPMR calls for “smart regional targeting”, territorial flexibility for regions.

CPMR’s Policy Analyst, Estela Lopez-Hermoso, gave a general overview of the positive and negative characteristics and added value of Cohesion Policy, which remains a central EU investment policy covering all regions, as well as the provisions regarding cooperation and multilevel governance, along with efforts to simplify procedures.

Moreover, the United Kingdom will be able to participate in some INTERREG programs, while the interregional investment component in innovation will play an important role.

However, “the lack of targeting in Cohesion Policy is its main negative feature”, stressed Lopez.

“Ultimately, is it a policy that reduces inequalities, attracts investment, perceives the European Semester and it is used as a tool by the Member States, or should it be all of these at the same time?” she questioned.

“Cohesion Policy is changing in the years to come. It includes simplification of procedures, remains a policy for all regions of Europe, the absorption rule from n+2 is transformed into n+3 and inter-regional innovation partnerships are observed”, said the Vice-Governor of International and European Affairs, George Alexakis.

The link between Cohesion Policy and the European Semester is its main negative feature,  said Alexakis, as there is a risk that the fixed targeting will be lost. In addition, real spending on cohesion will fall  and cross-border cooperation is set to be abolished, which will affect countries like Greece, Italy, and Cyprus.

“In Crete, we are implementing European competitive programs for tourism, smart specialization, environment and blue growth. It is important to understand that the regions are the proper scale of administrative governance in order to attempt a new dynamic and macro-regional strategy in the Mediterranean”, Alexakis concluded.

Region of the Ionian Islands: “Territorial cohesion must be up-to-date”

For his part, the Ionian Islands Regional Governor, Theodoros Galiatsatos, expressed his opposition to the nationalization plans for Cohesion Policy, arguing that it is necessary to focus on growth, employment, and sea-basin strategies.

The aim is to “build alliances in the EU with tangible results for citizens, as well as strengthened collaboration among the regions, in order to see the positive effects of European funding”, Mr. Galiatsatos said.

Lastly, he presented the activities of the Ionian Islands Region in relation to strategic projects on cohesion including the creation of a North-South road and coastline, the creation of a waterway network through a link with Italy (and possibly Croatia) and the use of electricity which leads to a significant reduction of pollutants.