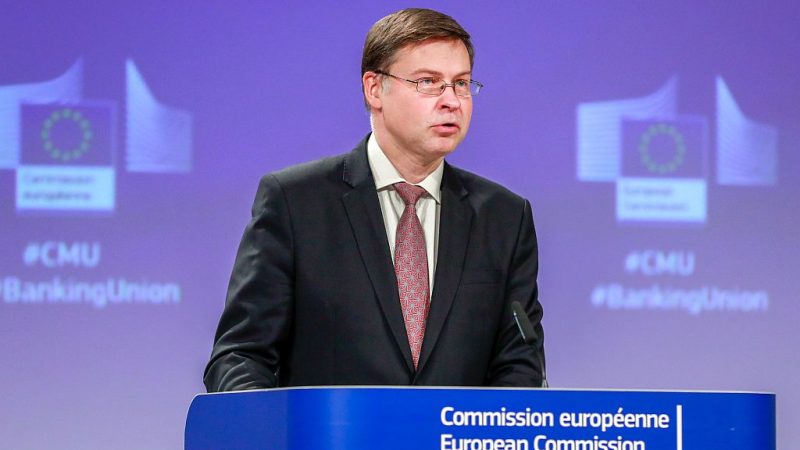 Valdis Dombrovskis, vice president of the European commission for the Euro gives a press conference in Brussels on 28 November 2018. [EPA-EFE/STEPHANIE LECOCQ]

The European Commission urged member states on Wednesday (27 February) to reform their economies as the risks related to the US-China trade war, a disorderly Brexit or the Italian economy could worsen the deceleration of the European economy.

Institutions including the OECD, IMF and the Commission had already told national governments to balance their public accounts and lift their growth potential with reforms “while the sun is shining”.

As clouds are now gathering on the horizon, with slower growth, weaker confidence and investments, the Commission stepped up its recommendation to EU members.

“The impact of the slowdown will depend on the policy action,” Commission vice-president for the euro, Valdis Dombrovskis, told a media briefing on Tuesday.

The EU executive assessed the macroeconomic imbalances of the 28 national economies. The capitals will follow by submitting by the end of April their stability and convergence programmes to address the detected flaws.

Based on the analysis of the national plans, the Commission will issue in late May country-specific recommendations to member states to reform their economies and adjust their public accounts.

“We need well-targeted investment and reforms to ensure we enjoy a long lasting growth,” Dombrovskis said.

Last month, the Commission cut its growth forecast for this year and the next, dragged by Germany and Italy’s deceleration.

The European economy still maintains its pulse after seven years of consecutive growth that brought unemployment levels to a record low of 6.6%. But many factors could bring the expansion to an end, including a resumption of the trade war between the US and China or a disorderly Brexit.

In addition, there is an “ongoing uncertainty” about the budgetary adjustments in some countries, “notably Italy,” said Dombrovskis.

Italy, Greece and Cyprus are the only countries still experiencing excessive macroeconomic imbalances, the Commission confirmed on Wednesday.

Any turbulence in Italy could threaten the stability of the euro area, given its high level of public debt (132% of its GDP) and its shaky banking system.

Although Rome and Brussels reached a compromise late last year to close the budgetary spat, the lower than expected growth predicted for this year may force the populist and far-right coalition government in Italy to adopt further measures.

The EU executive is in contact with the Italian government, but decisions related to its budget will come in spring, once the country submits is national plans. Dombrovskis warned that Italy’s debt-to-GDP ratio is not expected to fall, given the smaller growth projected.

He added that it would be challenging for the country to maintain this pace of reduction of ‘bad loans’. Moreover, the Latvian Commissioner regretted that “the reform momentum of 2015 stalled” and important reforms will be reversed this year, notably in the pension system.

While Italy is bringing too much instability to the euro area, Germany is blamed for contributing too little with its internal demand. As the Commission pointed out in its report,  every euro spent in Europe’s largest economy has “cross-border relevance” for the rest of its neighbours.

In times of economic slowdown, Europe needs its German powerhouse. But although the country has enough fiscal space (with increasing budgetary surplus and falling public debt), Berlin is reluctant to open its wallet.

“While a number of measures have been taken to strengthen private and public investment, more efforts are needed to clear the large investment gap particularly as regards public investment in infrastructure and education,” the Commission said in the report.

Although the internal demand picked up slightly last year, investment and consumption as share of GDP remain “muted”, the EU executive noted. Moreover, real wage growth was modest, despite the low level of unemployment and the need to improve workers’ salaries.

If Germany continues to register macroeconomic imbalances, despite its sound public accounts, France is also part of this group, despite President Emmanuel Macron’s reform efforts to transform the economy.

Brussels welcomed the progress made on the labour market, taxation or the business environment.

“However, the effects of these reforms still have to fully materialise while further action is warranted in other fields, such as the reform of the unemployment benefit system, the reform of the pension system, and the spending review to ensure the sustainability of public finances and to enhance the growth potential,” the Commission’s report warned.

The institution was particularly worried about the weak competitiveness of the second largest eurozone economy and its high level of public debt, which limits the space to react to future economic shocks.

In regard to Spain, the EU executive continues to be worried about the high level of unemployment and public debt, and the sustainability of the public accounts. “Further efforts will be needed to bring public finances onto a more sustainable path,” the report says.

Dombrovskis highlighted that Spain’s growth is still above the euro area average. But the country “has been slow” to implement the recommendations made but the Commission to lift its growth potential.

The EU executive also highlighted that the political instability in the country, following the change of government last June and the new elections scheduled for 28 April, led to “general slow progress on the reforms.”

But Dombrovskis added that “elections are a normal part of the democratic process…and we have to accept it”.