Commissioner for Economy, Paolo Gentiloni, during the presentation of the winter economic forecast on 13 February. [European Commission]

The European Commission expects the Spanish economy to contract by as much as 9.4% this year due to the impact of the coronavirus, although it should regain some of the lost ground in 2021, when it is expected to grow by 7%, EU sources told EURACTIV.

COVID-19 has hit Spain hard over the past weeks. With more than 25,000 deaths caused by the virus, Spain is the second most affected country in the EU in terms of mortality, after Italy.

In order to contain the spread of the virus, the government imposed some of the strictest confinement measures in Europe, bringing the fourth-largest EU economy almost to a total halt.

As a result, Spain is expected to suffer one of the deepest recessions in the eurozone, according to the spring forecast that the Commission will present on Wednesday morning (6 May). 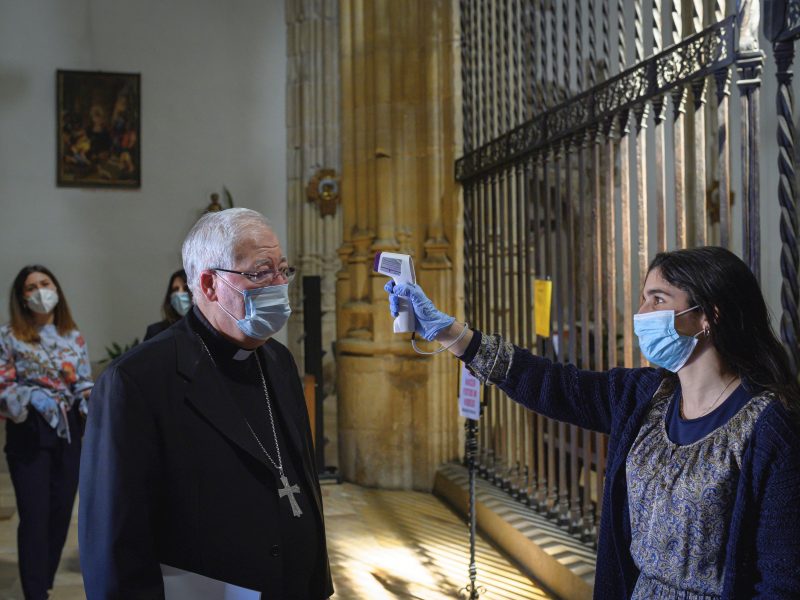 Spanish Prime Minister Pedro Sánchez announced on Saturday (2 May) that face coverings will be mandatory in public transport after phase 0 of the government’s multi-staged de-escalation plan begins on Monday. EURACTIV’s partner EFE reported.

“We know that the absolute confinement …

The Commission’s spring forecast is in line with the figures that the Spanish government presented on 1 May as part of the stability plan sent to Brussels.

The government in Madrid expects an asymmetric ‘v’ shaped recovery, with a 9.2% recession this year and a 6.8% growth rate in 2021.

The forecasts by Madrid and Brussels are also very similar when it comes to the evolution of Spain’s public accounts in the aftermath of the pandemic.

The Spanish government expects that its budget deficit will reach 10.3% of its GDP this year while its debt will balloon around 20 points to 115.5% of GDP. It did not give any projection for its public accounts in 2021, as it said there were many uncertainties.

The Commission’s economic forecasts are based on a “no policy change” scenario, meaning that the deficit and debt figures for next year do not take into account the costs related to the recovery, as member states are in the midst of negotiations on a financial plan to overcome the fallout of COVID-19.

The spring forecast will be the first outlook in which the Commission will take into account the impact of the coronavirus. In February, the EU executive said it was too early to assess the economic damage, as EURACTIV reported.

Economic Affairs Commissioner, Paolo Gentiloni, said last week that the growth figures for the eurozone as a whole would be in line with the IMF’s projections, which last month put the expected decline of the euro area’s GDP at 7.5% this year, followed by a rebound of 4.7% in 2021.