“You cannot address a crisis of this dimension with a 1% GNI [gross national income] budget,” the Portuguese Commissioner told EURACTIV, “there is no country in the world for which the national budget is 1% of the total wealth.”

Ferreira said the proposal of a €1.1 trillion seven-year budget and a €750 billion recovery instrument is “adequate to the level of the of the crisis,” not only in size but also because of the decision to borrow from the markets using the budget as a guarantee, the euro-based debt approach as opposed to the dominant dollar, the call to strengthen own resources, the important share of grants and the variety of instruments.

She said all EU countries have had different levels of competitiveness from the start and the crisis has affected each country and region differently.

The EU’s regional development policy has become a central part of the recovery plan. “Since the beginning, cohesion policy was there so that the weakest economies could catch up to be able to play the game,” she added.

Save the Single Market

One of the Commission’s first decisions was to relax state aid rules, which Ferreira defended but admitted it had led to further inequalities in public investment levels which made the recovery instrument even more relevant.

“You cannot speak about an internal market if certain companies are being backed while other companies are located in member states that cannot afford to support them,” she insisted in defence of the recovery instrument the Commission has put forward.

Ferreira also said the euro “cannot function if certain member states only accumulate deficits and the other surpluses,” which reaffirmed the position of the Commission, which has opted for a system based on loans and grants as opposed to the ‘frugals’ insistence on loans.

If countries like Italy or Spain, which represent an important share of the Single Market and the EU’s economy, go into a recession, “the recession is not a Spanish or an Italian recession. It is a European recession,” the Commissioner warned.

“Relaunching the economy is essential not only for the countries that are considerably more affected but also for member states benefiting from a market that is well over their borders.” 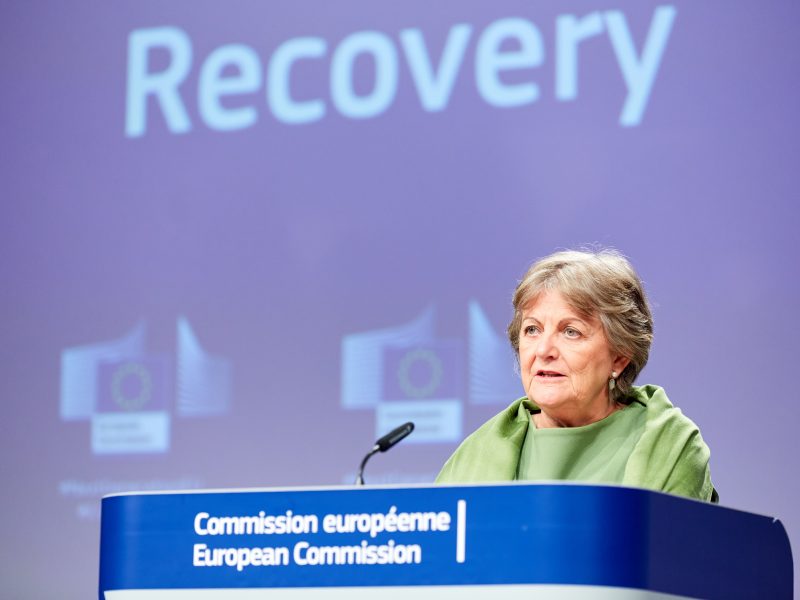 How to spend the money

In the new recovery instrument, the Commission has included a new tool, React EU, meant to target the consequences of the crisis by channelling funds through regional policy. Some member states have questioned the criteria, arguing it could be used to tackle pre-existing structural problems.

The budget for the programme goes up to €55 billion but the executive has not yet unveiled how much money will go to each member state.

The EU executive will compare each member state’s performance before and after the crisis, looking at the loss of GDP, the increase in unemployment, and the relative prosperity of the countries. The exact figures will only be available later this year.

“We are not working on estimates, because estimates in a period of crisis are very difficult to do correctly,” Ferreira said. And even so, the Commission has proposed to introduce a mid-term review of the budget that would allow readjusting the allocation of funds to accommodate a potential long-term impact of the pandemic.

Commission President Ursula Von der Leyen has pledged to re-launch Europe’s economy while focusing on the pre-crisis goals – the digital and green transformations and economic resilience.

“We cannot make our recovery on the basis of recipes that didn’t function in the past. And one of these recipes is that we disregarded for too long the impact of our economy on the environment,” the Commissioner said.

However, the flexibility introduced in the cohesion policy has raised some concerns that countries could drift away from the green objectives using the crisis as a pretext.

“What has been released, because we are in an emergency, is the quantitative element of how much you have got to achieve in each programme,” Ferreira said. “This doesn’t mean that the principle of no harm or the green objective is waived,” she said.

“We cannot do harm and then have another fund to correct the harm that we have done with the first initiative,” the Commissioner explained.

The Just Transition Fund has been increased from €7.5 to €40 billion but some countries worry that by widening the scope, the instrument has lost its meaning.

“We want to make sure that the targeted approach is kept,” Ferreira said. “The DNA shouldn’t change.” The Commissioner explained that there is an ongoing dialogue with member states to identify the needs and make sure that the money flows into the areas in Europe with a more critical situation when looking at the transition from a carbon economy.

Member states will meet on Friday (19 June) to discuss for the first time the Commission package, with little chances of bridging their differences quickly. Ferreira urged EU leaders to speed up the talks “so that companies, small and medium enterprises, workers, municipalities, regions… start really feeling the presence of Europe.”