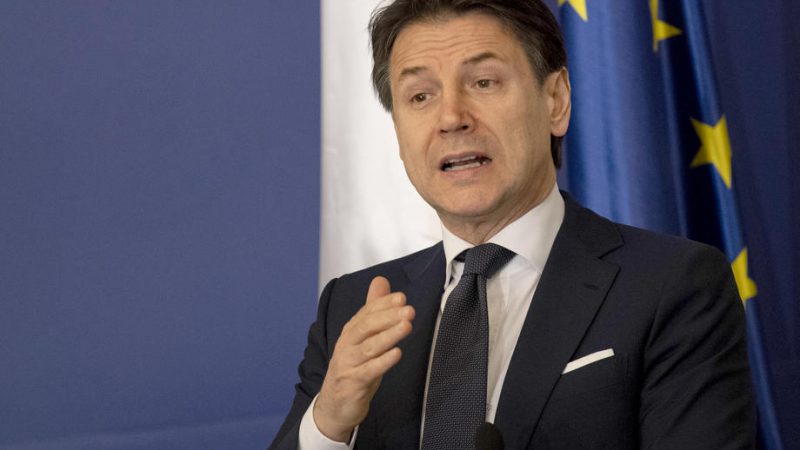 Rome remains cautious on using the European Stability Mechanism (ESM) as it was designed to address different shocks. But if the fresh rules governing the new credit line are considered adequate, then it’s up to the Italian parliament to decide to use it or not, Italian Prime Minister Giuseppe Conte told EURACTIV Italy in an exclusive interview.

EURACTIV Italy officially launched today on the occasion of Europe Day (9 May). The initiative is supported by the International Center for European and Global Governance (www.cesue.eu) in collaboration with the Corriere della Sera.

The Eurogroup gave its green light on Friday (8 May) for the use of €240 billion ESM credit lines to support Eurozone economies hit by the pandemic. The decision includes a maximum average maturity of 10 years for the loans and favourable interest rates close to 0.1%.

“On the ESM, as I have repeatedly said, we remain cautious. The instrument has been designed for different shocks and is set within a framework of rules that reflects this origin,” Conte said.

However, referring to a letter sent to the Eurogroup by Commission Vice-President Valdis Dombrovskis and economic affairs chief Paolo Gentiloni, he said it helped to clarify that the surveillance regime normally associated with ESM credit lines should not be applied to this new credit line.

“In any case, even if we consider the rules that will govern the new credit line to be adequate, the Italian Parliament will decide whether or not it is appropriate for Italy to activate it,” Conte said.

ECB has done its part

Referring to the role of the European Central Bank (ECB) in the pandemic, he stated that monetary policy has given a “strong first response”.

“Now the European Commission and the member states must do the same,” he said, adding that if the fiscal response to the pandemic is not fair for everyone, we risk very dangerous effects.

Earlier this week, Germany’s Constitutional Court questioned the proportionality of the ECB bond-buying programme launched in 2015, and which was considered as a critical part of the EU’s response to the financial crisis. It also dismissed a European Court of Justice (ECJ) ruling from 2018 that backed the programme.

The move prompted the reaction of ECJ, which warned it is the only legal body able to determine if an EU institution violated bloc law.

“The ECB is acting not to protect individual states, but to ensure financial stability and the proper functioning of monetary policy in the euro area,” Conte commented.

Regarding the whole €540 billion package, which includes loans from the European Investment Bank (EIB), the SURE employment scheme and ESM credit lines, Conte said it’s an important step but still insufficient.

Rome is now waiting for the Commission’s much-awaited proposal on the Recovery Fund due to be presented soon. EU Commissioner for Internal Market Thierry Breton recently said it was important that both grants and loans are included.

“The funds will probably be fully operational and managed within the European budget, but the Italian position is clear: the programme must be ambitious in terms of resources collected on the markets,” he said.

He added that it should primarily finance the sectors and countries most affected by the pandemic as well as provide for the availability of part of the funds in advance of January 2021 (the so-called frontloading).

He reiterated that funding must be provided on a long-term basis so that the weight of the exceptional but temporary fiscal effort now borne by the member states can be spread over time.

“Resources must be given primarily to the most affected states and must include a very significant proportion of grants, while not wanting to exclude loans; the states must be responsible for allocating them within a clear framework of common rules.”

The disagreement with Rutte

Conte also referred to his “disagreement” with his Dutch counterpart Mark Rutte.

“It is based on my conviction that we cannot react to this crisis along the lines of 2010. Now it is a question of looking to the future and not repeating the mistakes of the past.”

He said the COVID-19 crisis makes it necessary to “update” the debate over the type of Union that allows preserving pillars, such as the Single Market and Schengen, and fundamental principles, such as solidarity.

“We find ourselves, in essence, both having to protect the principles and pillars of the European Union as we have known it for decades, and to note that, without further integration, the European Union runs the risk of not being competitive and resilient as a global player. I would add that these are issues that require a contribution from all member states and that this crisis confirms that they can no longer be postponed in the name of a ‘minimalist’ approach to Europe,” Conte said.

Last but not least, Conte also spoke about the future of Europe, backing among others the completion of the Economic and Monetary Union, inspired by a “full balance between responsibility and solidarity”.

As far as decision-making processes are concerned, he said it was essential to ensure an effective power of legislative initiative for the European Parliament, also with a view to accountability in relation to institutions and citizens.

“It is no less important to make progress on the existing options for simplifying the Council’s decisions and on forms of citizens’ involvement with full transparency in the elaboration of policies, an objective that is fundamental, especially towards the young people of our continent,” the Italian premier concluded.