Swiss government to fully align itself with EU sanctions on Russia 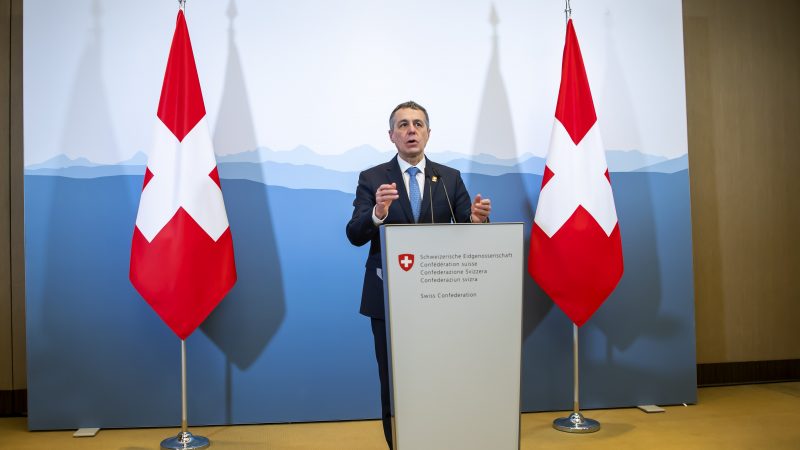 Switzerland's President and head of the Federal Department of Foreign Affairs Ignazio Cassis faced a storm of criticism after a press conference on 24 February. [MARTIAL TREZZINI (EPA-EFE)]

The Swiss Federal Council met on Monday (28 February) for an extraordinary meeting and decided to fully adopt EU sanctions against Russia after public criticism of the government’s previous inaction intensified.

In a press conference after the meeting, the current Federal President and Foreign Minister Ignazio Cassis said that the Russian aggression in Ukraine was an attack on democracy and was morally and politically unacceptable.

“That is why the Federal Council decided today to fully adopt the EU’s sanctions,” he said, referring to the sanctions packages decided by the EU on 23 and 25 February.

“The assets of the listed persons are frozen with immediate effect,” Cassis said, adding that the freeze would also include eventual assets of Russian President Vladimir Putin and Foreign Minister Sergey Lavrov.

The Swiss government also announced that it would ban five unnamed oligarchs close to Putin and with significant business ties to Switzerland from entering the country.

Cassis had previously hinted at a significant tightening of Swiss sanctions in an interview with the public broadcaster on Sunday (27 February).

The Swiss government’s decision comes following mounting criticism as the government refused to freeze bank accounts of sanctioned Russians and decided not to align itself with all EU sanctions on 24 February.

While the government did not want Switzerland to be used to avoid EU sanctions, Russian individuals and companies were still able to access their Swiss bank accounts – until Monday’s decision at least.

Following the decision on 24 February, Cassis was severely criticised for how he handled the communication. He did not take any questions, and the government officials tasked with answering questions offered no useful explanations, prompting even more criticism.

“If a federal president who is also foreign minister does not even attend the media conference after a meeting of the Federal Council on a war in Europe, then I do wonder who I elected,” the President of the centre-right “centre party” Gerhard Pfister stated on Twitter.

According to the Bank of International Settlements, Swiss banks host around $11 billion in Russian deposits or about 30% of all Russian overseas deposits. Moreover, about 80% of Russian trade in resources is handled by Swiss financial intermediaries.

Except for the far-right Swiss people’s party (SVP), all Swiss parties were in favour of adopting EU sanctions. Together, they hold five of the seven seats in the Swiss government. The SVP has the other two seats.

An online petition started by the Social Democrats urging the government to impose stricter sanctions has gathered more than 130’000 signatures since Friday (25 February).