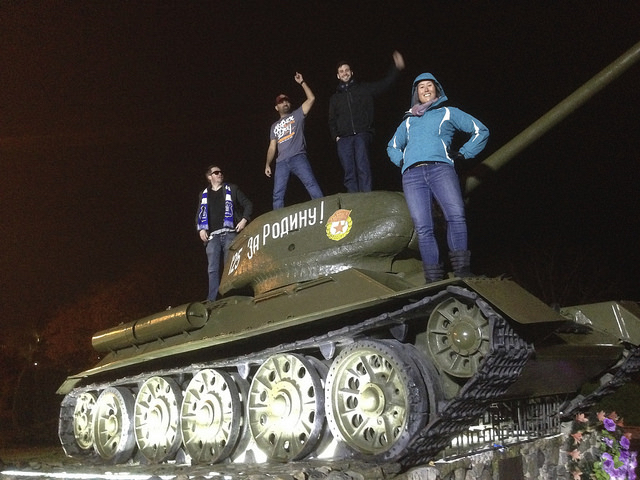 Up to 500,000 Moldovans live and work in Russia. [Clay Gilliland/Flickr]

Wedged between Romania and Ukraine, the country of 3.5 million and one of Europe’s poorest, has relied heavily on remittances from abroad to boost its agriculture-based economy.

But economic woes in neighbouring countries have seen remittances drop and migrants return in droves despite few opportunities in their country, which holds presidential elections on Sunday.

“I’m done with Russia. There is no more work there,” said Pasha, a construction worker from Porumbrei, some 40 kilometres (25 miles) south of the capital Chisinau.

Moldova will go to the ballots on Sunday (30 October) for a presidential election viewed as a tug-of-war between supporters of European integration and advocates of closer relations with the ex-Soviet country’s former master Moscow.

Like Pasha, 28-year-old Grigore returned home after receiving only a fraction of the $1000- (915-euro) salary he was promised.

Since the collapse of the Soviet Union in 1991, mass emigration from Moldova has helped breathe life into its economy.

The figures are nonetheless grim. Some 41% of the country’s people live on less than $5 a day while the monthly average salary stands at $240, according to the World Bank.

Olga Coptu, who heads the Bureau of Diaspora Relations, said 800,000 Moldovans — nearly a quarter of the population — live abroad.

The outflow of Moldovans in search of a better life, including highly-skilled young people, has seen villages and towns depopulated.

“One in 100 Moldovans leaves the country every year,” Stela Grigoras, Moldova’s minister of labour, social protection and family, told AFP.

“This is the highest emigration rate in the region.”

Moldova is often viewed as a tug-of-war between Russia and the West, especially after it signed a historic EU free trade agreement two years ago despite bitter opposition from Moscow.

In addition to facing political turmoil, the country has seen the remittances that once kept its economy afloat slide.

In 2008, Moldova received $1.66 billion in remittances from abroad, a figure that accounted for 27% of its GDP.

But last year, that figure dropped 30%.

Remittances from Russia, whose energy-dependent economy was battered by low oil prices and Western sanctions, have dropped 45%.

The Russian ruble lost nearly half its value in 2014 on the back of these economic troubles.

But the crisis in Russia is far from being Moldovan migrants’ only concern.

Veronica, 32, had dreamt of joining her brother and three sisters in Italy but gave up on her plan because of economic problems there.

“Paradoxically, my sister is a cleaning lady and she makes more than her Italian husband who works in a real estate agency,” she told AFP.

Moldovan authorities are striving to bring the country’s citizens back home, offering them modest financial incentives if they make investments in the country.

Ioana Jumir, 23, had hopes these measures would finally allow her to open a small business in her native country after having sought work in Russia, Poland and Greece.

But she isn’t optimistic.

“When I made some calculations, I saw that it wasn’t worth it,” she said. Jumir, who was eight when her parents went looking for work in Russia and left her behind with her grandmother, dreams that one day her compatriots will no longer be forced to “work like slaves” abroad.

But she fears that politicians, “whose only goal is to get as rich as possible,” would ultimately not help the population live better.