The third contender is Luxembourg’s finance minister Pierre Gramegna, but only two candidates will make it to the final round of voting and his chances appear slimmer.

The winner will take over from Portugal’s Mario Centeno on 13 July for a mandate of two and a half years, a term that can only be extended once.

“It will be a neck-and-neck race between Calviño and Donohoe,” said an EU diplomat who is following the vote.

“The difference will be only one or two votes,” another EU official added.

To be elected, the winner will need to garner support from at least 10 ministers out of the 19 composing the Eurogroup. 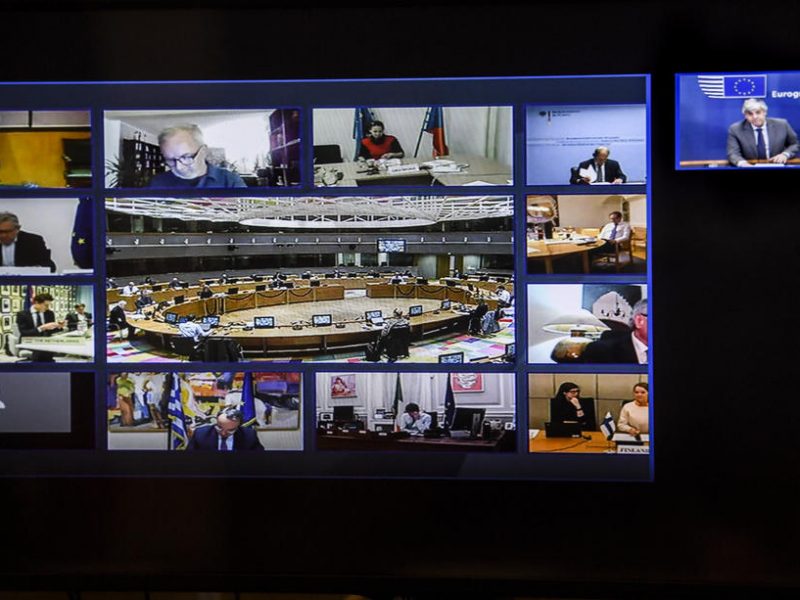 Calviño, a senior member of the Spanish socialist government and former senior official at the European Commission, was seen as the frontrunner when the process was launched in June.

But her federalist stance on eurozone integration is a cause of friction with Northern member states, and the larger number of centre-right ministers in the Eurogroup (seven) has narrowed her chances.

Donohoe is both a member of the centre-right European People’s Party (EPP) and the Northern bloc, and he could end up being slightly ahead of Calviño, one EU official said.

But EU sources admitted that predictions are very difficult because the vote will be secret and several member states have not declared their support for any candidate.

As ministers will meet by videoconference, they will hold their vote via a web-based application, and only a couple of Council officials will know the results, a senior EU official said.

There will be several rounds of voting and the only result that will be made public is when a candidate reaches or surpasses the simple majority.

Calviño could have an ace up her sleeve with the support of Germany and probably France. If confirmed, their support could be decisive to win the couple of votes that she misses in order to come out first.

Paris hasn’t given any indication about how France intends to vote, as the French government is seeking support at the same time to lead the European Bank for Reconstruction and Development.

His vote, together with the five socialist members of the Eurogroup, and defections in the EPP (Greece) and the Liberals (Finland), would leave Calviño only short of two votes from victory in the final round.

Among the unknowns is whether Malta’s Edward Scicluna, a socialist who is the Eurogroup’s longest serving minister, will also support Calviño. Several EU sources consulted by EURACTIV admitted they didn’t know what Scicluna will do.

The swing votes that could decide the Calviño-Donohoe contest are Belgian Liberal Alexander De Croo and Lithuania’s Vilius Sapoka, a minister with a technocratic profile.

When it comes to Belgium, both Madrid and Dublin are taking for granted that they will win their support, an EU source said.

Belgium has been more in tune with Ireland in Eurogroup matters, but its prime minister supported Spain in key moments during this crisis, including on the issue of coronabonds.

Lithuania’s position remains a mystery for many. But they are part of the new “Hanseatic League”, a group of Northern countries which opposes southern Europe’s calls for further integration in the eurozone.

A source close to Calviño did not want to comment on their supports ahead of the vote, saying they were “cautious” given the numerous uncertainties.

Sources close to the other candidates stressed that the three ministers had “strong support” and that there were “various dynamics” at play that will decide the winner.

Among the strengths of Calviño’s candidacy is her experience as a former senior Commission official and her expertise. If she is elected, she would also become the first woman to lead the Eurogroup, and add her name to a list of women who broke the EU glass ceiling after Ursula von der Leyen and Christine Lagarde made it to the top of the European Commission and the European Central Bank.

But those who are opposed to her candidacy consider that Donohoe would be a more appropriate profile to restore the consensus spirit of the Eurogroup, which is running low since the 2008-2010 recession. The Eurozone reform debate and the coronavirus crisis only widened the differences between blocs and political families.

“Donohoe will be seen more as a compromise candidate than Calviño, given her quite outspoken views on economic and financial policy,” and EU diplomat said.

Whoever the winner is, the priority task will be to restore unity among Eurozone colleagues. Otherwise, the Eurogroup risks becoming “an antique of the past with little relevance” in the European decision-making process, an EU diplomat warned.