EPP tries to rein in push for greener monetary policy 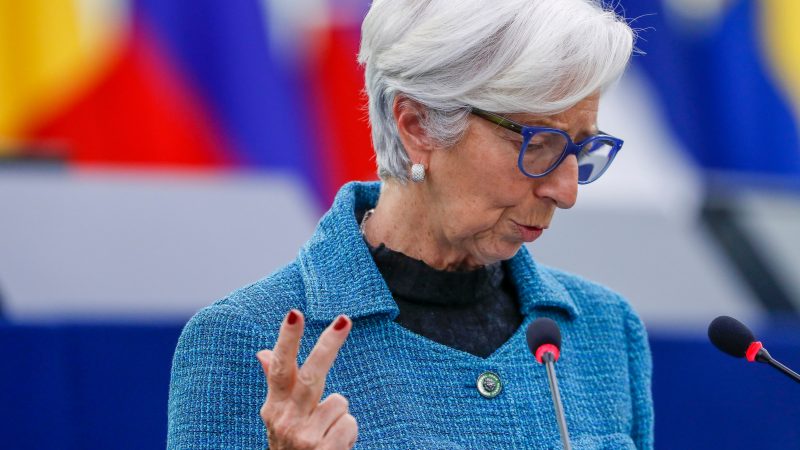 Can she count on the Parliament to support her cautious pivot towards a greener monetary policy? Christine Lagarde, President of the European Central Bank (ECB) delivers a speech in Strasbourg, France, 14 February 2022. [EPA-EFE/JULIEN WARNAND]

*Updates with the result of the Parliament vote

The EPP representatives urged the ECB to focus on its primary mandate of price stability instead of taking on additional tasks, in reference to recent price increases.

Every year, the European Parliament presents a report on the ECB’s monetary policy.

“Despite not being binding, the Parliament’s report enables criticism to be channelled towards the ECB in a democratic fashion and helps the debate on monetary policy move forward,” Stanislas Jourdan, executive director at Positive Money, an NGO focused on monetary policy, told EURACTIV.

For example, the report drawn up by the Parliament’s economy committee states that the ECB is bound by the EU’s commitments under the Paris agreement. “The ECB needs to use all the tools at its disposal to fight and mitigate climate-related risks,” it reads.

Moreover, the report criticised that the ECB’s asset purchase programmes “have been indirectly supporting carbon-intensive activities”.

Furthermore, the report questions the ‘market neutrality’ principle that the ECB usually tries to pursue in its monetary policy – meaning that the ECB avoids giving preference to one market participant over another in its policies.

The draft report advises the ECB to rethink this principle in cases of ‘market failure’. Instead of following a strict market neutrality principle, the ECB should aim at an efficient allocation of resources over a long-term horizon.

This focus on climate policy faces criticism from the right and centre-right of the Parliament.

“Some people seem to confuse the European Central Bank with the European Environment Agency, but that is a mistake,” EU-lawmaker Markus Ferber of the EPP told EURACTIV.

Even though they had supported the draft report in the economy committee, Ferber and his EPP-colleague Georgios Kyrtsos had proposed a range of amendments to be voted on by the European Parliament on Tuesday evening (15 February).

The amendments would reemphasise the ‘market neutrality’ principle of monetary policy. The EPP also asked for separate votes on the paragraphs of the report that tell the ECB to use all tools at its disposal to fight climate-related risks and that criticise it for indirectly supporting carbon-intensive industries.

“Demands to “green” monetary policy are not only a distraction, they also imply an extension of the ECB’s mandate through the backdoor,” Ferber said, adding that this would require a change of EU treaties.

“I want the ECB to get its main job done, that means ensuring price stability,” he said.

Dimitrios Papadimoulis of The Left in the Parliament and main author of the annual report on the ECB’s policy, however, argues that tackling climate change is important for price stability.

“Climate change, the loss of biodiversity and their consequences also touch upon the ECB’s primary mandate since they can hamper the effectiveness of monetary policy, affect growth, and increase prices and macroeconomic instability,” he told EURACTIV.

While Ferber thinks that the current spike in inflation is a reason for the ECB to think less about climate, Papadimoulis takes it as a reason to invest more in climate action, given the fact that current price increases are mainly driven by gas prices.

Jourdan supports this argumentation. “At this point it should be clear for the ECB that the best way to overcome the current energy price crisis would be to increase the domestic production of renewable energy”, the monetary policy campaigner told EURACTIV.

ECB president Christine Lagarde, meanwhile, stayed cautious when she addressed the EU Parliament on Monday (14 February), announcing that the implementation of the ECB’s climate change action plan was on track.

She stressed the need for more information. “Integrating climate-related indicators and risks is essential to better understand how climate change is affecting the economy, the inflation outlook, monetary policy transmission and financial stability,” Lagarde  told the Parliament.

Update: The Parliament voted on Tuesday (15 February) evening. While the final text of the Parliament report reemphasizes the importance of the ‘market neutrality’ principle, as advocated by the EPP, the other climate-related amendments proposed by the EPP were not successful.