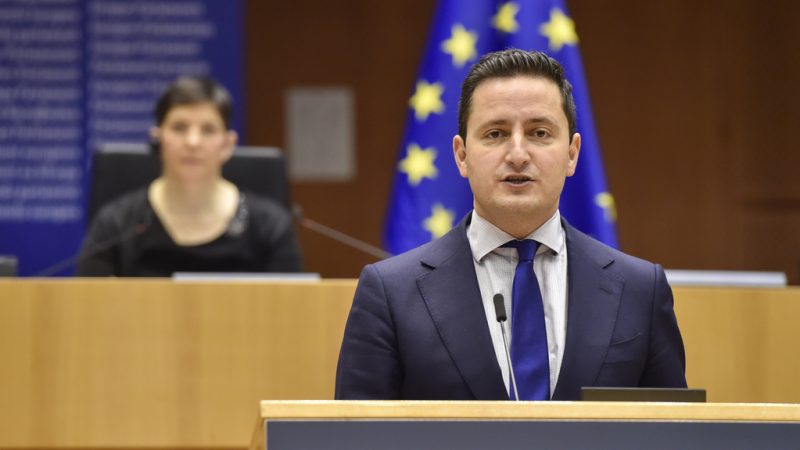 Asked if the EU should also consider Russia’s Sputnik vaccine, as Germany, Austria and several other EU member states have suggested, Ștefănuță replied: “I'm sure if it's a good vaccine, it's welcome to come.” [European Parliament]

The Romanian EU lawmaker from the centrist Renew Europe group said next year would be a crucial test for EU finances as it may be the first year after the pandemic.

The European Parliament on 25 March agreed on the general guidelines for the preparation of the 2022 budget, which according to Ștefănuță, will still have some wounds from the pandemic but the bloc should stand ready for all scenarios.

But 2022 will also be the year of the first disbursements of the €750 billion Recovery Fund to help the bloc recover from the crisis. The lawmaker said the European Public Prosecutor’s Office and controlling institutions should stand ready to play their role.

“If you want to spend a lot of money quickly and simultaneously have the confidence of EU citizens, you have to have also the controlling and rule of law institutions ready,” he said.

Ștefănuță also emphasised the importance to equip, both financially and with sufficient staff, health-related institutions such as the European Centre for Disease Prevention and Control (ECDC) and new projects such as the Beating Cancer plan.

“They need to have everything they need,” he said, adding that with or without a pandemic, “EU health policies are here to stay”.

The EU lawmaker also suggested the unused funds due to the pandemic from youth Erasmus programme to be used in the following years otherwise they will be wasted.

Ștefănuță also underlined the need to strengthen and enlarge Schengen. “Joining Schengen is not a matter of readiness, it’s a money issue,” he said, adding that both Schengen members and those on the waiting list are currently facing a lose-lose situation.

Ștefănuță also talked about the slow vaccine roll-out in Europe, saying that the main problem was that British-Swedish pharma industry AstraZeneca did not deliver its promises and therefore the whole vaccination strategy was derailed in the first quarter as many EU countries had relied on these deliveries.

“The entire strategy in the first quarter was based on a false assumption,” he said.

Ștefănuță added that in the second quarter the bloc expects more than 350 million doses to be delivered and it will help Europe get back on track.

An EU source told EURACTIV that the target to have 70% of the adult population fully vaccinated by the end of this summer is still feasible considering that an increase of deliveries in the second quarter is expected.

“As for AstraZeneca, unfortunately, they will only deliver some 70 million doses. This is down from the 180 million doses that they are contractually committed to deliver,” the EU source said.

Asked if the EU should also consider Russia’s Sputnik V vaccine, as Germany, Austria and several other EU member states have suggested, Ștefănuță replied: “I’m sure if it’s a good vaccine, it’s welcome to come.”

Sputnik V currently undergoing a rolling review by the European Medicines Agency (EMA) but no official request for market authorisation has yet been made.

However, French Minister of State for European Affairs Clément Beaune said on Thursday that it would not be possible for EMA to approve the vaccine before the end of June.