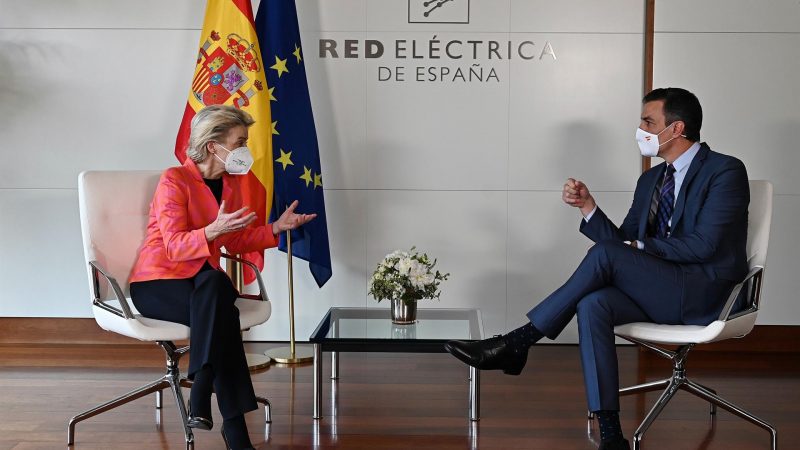 Speaking after Sanchez, von der Leyen said that the progress in the vaccination campaign and the beginning of the economic recovery provided hope. [EFE/ Fernando Villar]

Brussels has approved the coronavirus recovery funds for Spain and Portugal during a visit by European Commission President Ursula von der Leyen to the two countries. EURACTIV’s partner EFE reported.

Under the scheme, Spain will receive €69.5 billion in grants by 2026. It is expected to receive the first €9 billion once finance ministers sign off the plan in July.

“This is a historic day for Spain, for what it represents for our economy,” Prime Minister Pedro Sanchez told a joint press conference in Madrid on Wednesday (16 June).

“But it’s also a historic day for the European Union because it opens the door to the union and a new way to cooperate,” he added.

Speaking after Sanchez, von der Leyen said that the progress in the vaccination campaign and the beginning of the economic recovery provided hope.

Spain plans to spend 40% of the fund to fight climate change and 28% to digitise public administration and promote digital equipment for the education sector, the Commission said.

Portugal said it would spend most of its €16.6 billion on public health and the fight against climate change and making housing more energy efficient.

The EU Commission agreed on the NextGenerationEU fund last year to invest €750 billion altogether. It is the largest stimulus package ever agreed on for a greener, more digital and more resilient Europe.

Von der Leyen, who used the new EU Digital COVID Certificate to travel to Lisbon and Madrid, will head to Greece, Denmark and Luxembourg in the next two days as the Commission kicks off the recovery fund.