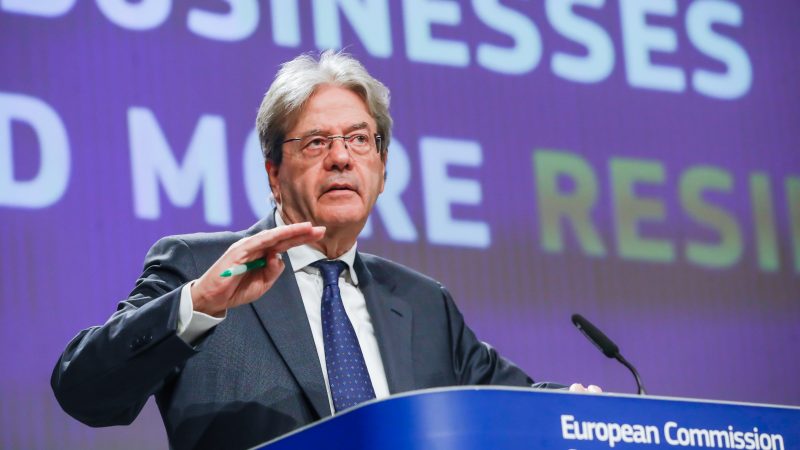 As most corporate tax systems in the EU currently prefer debt financing over equity and EU companies are highly indebted, the EU Commission proposed the introduction of a tax allowance that should incentivise the accrual of new equity rather than debt.

To cushion the impact of this de facto tax cut on new equity, the Commission also proposed to reduce the tax-deductibility of excess borrowing costs.

“Equity must receive a similar tax treatment as debt so that companies can consider both options on an equal footing,” Economy Commissioner Paolo Gentiloni said when he presented the Commission proposal for a “debt-equity bias reduction allowance” (DEBRA) on Wednesday (11 May).

This is currently not the case in most EU countries since companies can deduct their interest payments from their taxable income while they do not receive such tax benefits for the cost of their equity. The unequal treatment is known under the term “debt-equity bias”.

“This is a problem because it encourages companies to make economic decisions based purely on their tax treatment rather than on commercial considerations. That may ultimately leave businesses more vulnerable to insolvency and financial instability,” Gentiloni said.

Indeed, EU companies are highly indebted, with the total indebtedness of non-financial corporations reaching up to 111% of GDP. In the US, this figure stands at around 51%.

For now, only six EU member states have implemented measures to counter the preferred treatment of debt over equity, namely Belgium, Portugal, Poland, Cyprus, Malta, and Italy. The Commission wants to change this and introduce a harmonised approach for the entire trading bloc with the new proposal.

The proposed directive would introduce a tax allowance calculated based on the new net equity. If a company has increased its equity at the end of the year, it can apply a notional interest rate comparable to the interest rate paid on debt on this new equity.

Johan Langerock, advisor of the European Greens in economic and fiscal matters, views this allowance critically. “I’m not sure it is appropriate to introduce new corporate tax incentives at the moment,” he told EURACTIV, arguing that the focus should be on reducing tax incentives that can be used for aggressive tax planning.

However, the Commission does not want the proposal just to be a tax cut for fresh equity, so it also proposed reducing the tax deductibility of borrowing costs from 100% to 85%.

However, they also increase complexity.

“Tax compliance costs for business are expected to increase in a limited manner,” the Commission’s impact assessment on its proposal states.

A less complex way of reducing and even eliminating the debt-equity bias would have been to stop the tax-deductibility of borrowing costs.

However, the Commission’s impact assessment determined that this option would disincentivise investment and have a negative economic impact.

In general, the Commission’s proposal is welcomed across the political spectrum.

The Greens’ Langerock told EURACTIV that the proposal went in a “good direction”, even though he considered it too weak on the tax-deductibility of borrowing costs.

According to the Commission’s proposal, DEBRA should ideally come into effect on 1 January 2024. For this to happen, all member state governments need to agree since tax matters can only be decided at the EU level if there is unanimous support of all member states.