Thursday’s meeting will mark the end of Draghi’s era, marked by the euro debt crisis and bailout programmes, while the risk of a new recession looms on the horizon.

But his legacy as one of the “saviours” of the euro will remain, analysts and decision-makers told EURACTIV.

European Parliament President, David Sassoli, thanked Draghi “for the attention he always paid to the role of the Parliament,” telling EURACTIV that he praised his “balance, competence and authority”.

While Draghi’s most recent monetary decisions were questioned in some member states, everybody agrees that his “whatever it takes” speech in July 2012 marked a turning point in the EU’s attempt to save the euro.

“The doubts regarding the irreversibility of the euro were only truly dissipated after Draghi pronounced the most important three words ever said by a central banker,” said Mário Centeno, the Portuguese finance minister and chairman of the Eurogroup.

But Draghi’s contribution goes beyond his remarks in the summer of 2012, or the wider use of non-conventional measures that supported the recovery.

“Draghi also understood that the recovery should be seized to further strengthen the euro,” Centeno said.

Although “there is still work to be done”, Centeno believes that the euro area “is today in a better state than it ever was, and this is in no small part thanks to Mario Draghi”. 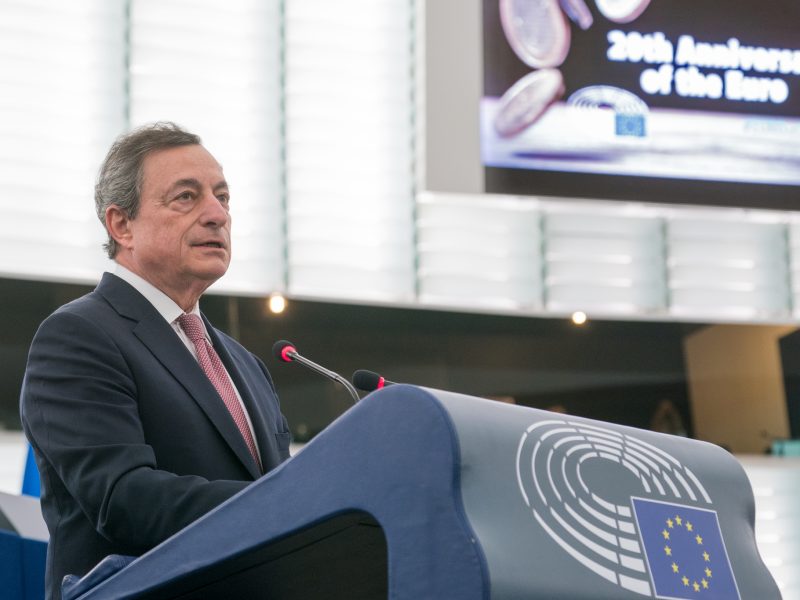 History will remember him for many deeds, but “with ‘whatever it takes’, Mario Draghi has gained his place in the pantheon of euro area policy-makers,” Dombrovskis said.

“He is a great central banker and resolute man who has had the authority and courage to take difficult decisions and to be innovative when necessary,” he added.

Le Maire also believes that Draghi “has been an excellent ECB President”.

This is despite criticism from French central banker François Villeroy de Galhau, who joined his Dutch, German and Austrian colleagues in questioning parts of the last round of monetary decisions adopted in September.

But Le Maire said that “throughout his mandate,” Draghi was “able to make courageous decisions that have enabled the euro zone to recover from the crisis.” And “more recently”, his decisions helped “to support the European economy in the context of the economic slowdown.”

For Calviño, Draghi “is undoubtedly one of the most relevant personalities of the last decades in the economic field.”

Thanks to his famous three words, Spain started to overcome the crisis and “opened the door to the use of new monetary policy instruments, which are gradually ceasing to be extraordinary, strengthening the central banks’ capacity for action,” she said.

Calviño echoed Draghi’s warning about the limits of monetary policy to call for completing the economic and monetary union with “common stabilisation instruments”.

From a personal point of view, Spain’s interim Economy minister said that “I have always appreciated the calm, clarity and common sense that Mario Draghi exudes in all his interventions”.

The former Dutch finance minister worked with Draghi in the Eurogroup for five years. In particular, he praised that “he really took the lead at the ECB” to overcome the “reluctance” to adopt unconventional monetary instruments, such as quantitative easing (QE).

Dijsselbloem stressed the importance of Draghi’s experience in the Eurogroup, both in policymaking and in banking, and his authority as ECB president, always pushing for reforms among the ministers.

“He was important to me personally, he gave me sound advice very often”, for example during the banking union discussions or through the Greek crisis, negotiating with member states “with very different interests and ideas,” Dijsselbloem said.

He “fully disagrees” with the image shared by many in the Netherlands, Germany and other countries, where Draghi is described as an “Italian” who does not respect the traditional monetary policy position, even serving the Italian interests.

“I’ve always tried to explain in my country that you cannot expect the eurozone central bank to serve the interest of one country or one group, like the pension funds in The Netherlands. The ECB has to serve the eurozone as a whole,” the Dutchman said.

He hoped that Draghi “will be remembered as one of the people that got the eurozone through its first existential crisis, and let’s hope it was the last one.”

For Kastrop, Draghi did “a good job in ongoing difficult times for monetary policy”, especially considering that the euro area has no economic, financial or fiscal union at hand.

Kastrop, who was a senior official in the German Finance Ministry, said that the Italian central banker “was successful in striking a difficult balance between the political preferences of the eurozone central bankers.”

Looking ahead, he warned that Draghi leaves a “critical heritage” to his successor, Christine Lagarde: how to re-establish the “ECB firepower” without taking any measure that could affect the financial sustainability and create a “vicious circle.”

Draghi is part of the group “who rescued the euro” by stepping up to the euro crisis, with “bold and determined” actions, and “powerful” communication, Demertzis said.

But she added that, under his leadership, the ECB “overextended itself” with its asset purchasing programme, reducing the EU’s ammunition when the next recession hits. When Lagarde takes over, she will have to be “inventive” and “navigate partially in the dark,” she warned.

“Still, President Draghi’s legacy will be one of helping establish a truly European financial power gun,” she said.

Like everyone else, Lallemand agrees that Draghi’s “whatever it takes” speech “helped to contain the euro crisis” and showed that “the ECB can and should take bold action when circumstances require”.

But “this boldness came at high costs to inequality, productivity and the climate change agenda,” he argues.

“QE distorted the distribution of wealth, favoured financial assets over productive investment, and subsidised fossil fuel companies among the other corporate issuers whose bonds it bought,” he explained.

In Lallemand’s view, Lagarde is sending “positive signals” about the challenges she will face to tackle the distributional effects of her tools, and the need of “deeper” democratic  accountability.