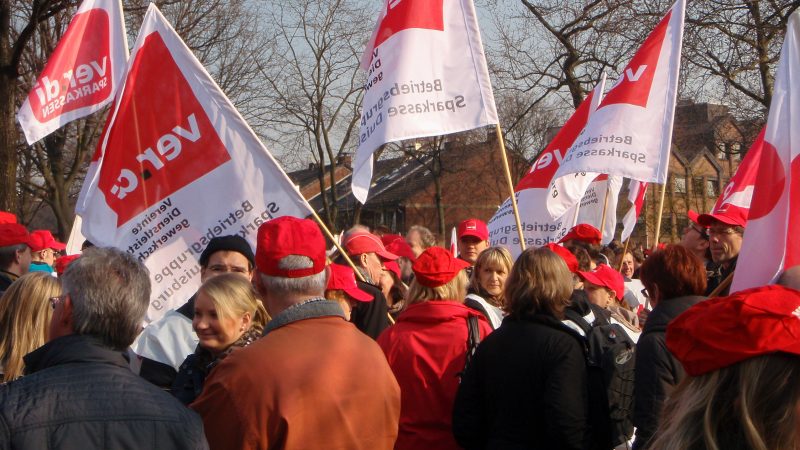 In the European pillar of social rights, EU citizens are granted the right to a “fair minimum wage”. To implement this right and after several calls by the EU parliament to do so, the EU Commission presented a proposal for a directive at the end of 2020.

The directive would require member states to either set a minimum wage or promote collective bargaining between employers and trade unions. Moreover, the directive aims to ensure that people in “bogus self-employment” have access to a minimum wage.

“Bogus self-employment” is a term used to describe platform workers like delivery drivers who are highly dependent on the platforms for their earnings but do not have a formal employment contract.

80% instead of 70% collective bargaining coverage

The trade association Business Europe called it a “recipe for disaster” when the directive was proposed. It argued for “truly autonomous social dialogue, not quasi-compulsory collective bargaining imposed by public authorities”.

However, the parliament’s employment and social affairs committee wants to see more ambition on collective bargaining and more protection for trade union activities.

According to the draft amendments by the parliament, member states below 80% would have to provide a clear timeline and take concrete measures to attain the 80% threshold.

Agnes Jongerius, the social-democratic co-rapporteur of the report, called the directive “a break with the past”.

Furthermore, the committee’s report urges a stronger focus on the gender wage gap, as female workers are overrepresented in low-wage sectors.

“[I]t is mainly women who are paid below a living wage, rendering many unable to provide for themselves and their families. With this proposal, minimum wages should contribute to reducing poverty and closing the gender pay gap”, said Kim Van Sparrentak, a green member of parliament.

The committee also wants the directive to forbid actions that would undermine workers’ efforts to collectively bargain for better wages.

The EPP’s co-rapporteur Dennis Radtke said: “With today’s vote in the Employment Committee, we have taken a major step and moved from words to action on the dignity of work across the EU.”

According to a study by the European parliament’s research service, 17.3% of Europeans are low-wage earners, meaning that they earn two thirds or less of the country’s median wage. There are, however, significant disparities among member states. Only 2.6% of workers are considered low-wage earners in Sweden, while 25.5% of Latvian workers fall into this category.

Currently, 21 of 27 EU member states have a statutory minimum wage. Corrected for differences in purchasing power, minimum wages in the EU range from €547 per month in Latvia to €1’634 per month in Luxembourg.

The report was adopted with 37 votes to 10, with seven abstentions in the parliament’s employment and social affairs committee. It is expected to be adopted by the entire parliament at the end of November, after which parliament will enter negotiations with member state governments.