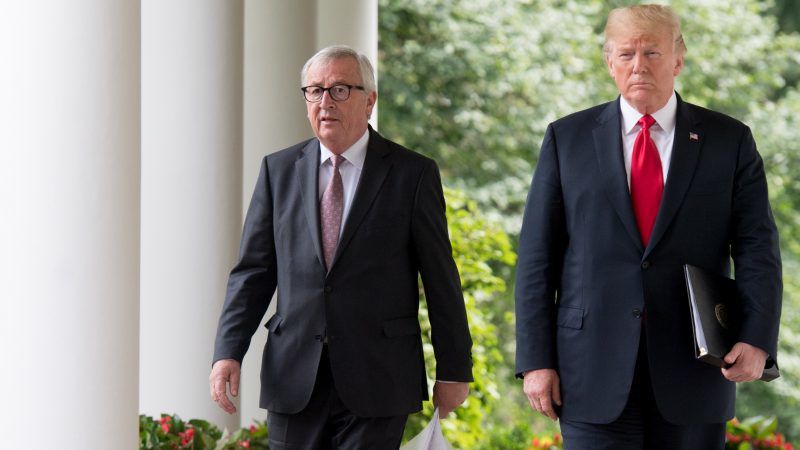 Negotiations to lower tariffs and other barriers on industrial products and services would be also launched despite US tariffs on Spain’s black olives.

Both sides committed on Wednesday (25 July) to resolving the steel and aluminium duties imposed by Washington and the retaliatory measures activated by the EU.

But the trade negotiations would not collapse if Trump decides to keep his restrictions in place. 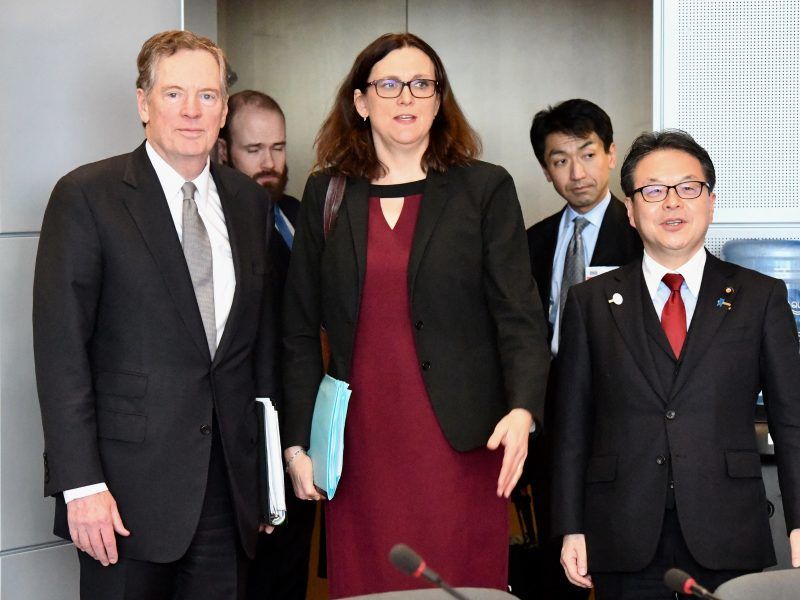 There is “no link” between the tariffs and the negotiations, an EU official said on Thursday (26 July). If the dispute is resolved, it would be a “good signal of the reduction of the trade tensions”. If not, Europe would maintain its countermeasures, the official added.

This counters EU Trade Commissioner Cecilia Malmström’s previous comments. On the day the tariffs on steel and aluminium were confirmed, she insisted that the EU offer was “you take this gun away from us, we sit together as friends and equals and we discuss and this could eventually have lead to a negotiation”.

Member states including France also questioned opening trade talks while the steel tariffs are in place.

French Finance Minister Bruno Le Maire said that Paris was waiting for “acts of goodwill” from the US Administration.

The restrictions on the metals are not the only ones approved by Trump’s office. The US recently confirmed its duties of 34.75% on Spanish black olives.

EU funds used to support Spanish farmers are seen by Washington as an illegal subsidy. For experts, questioning this support represents a threat to the system of the Common Agricultural Policy as a whole.

EU officials insisted that this topic is “of great importance” for the Union. However, this issue was not included in the joint communique because the US argues it is “trade defence measure”.

The Commission wants to wait until there is an opinion from the World Trade Organisation, where it could take the case in the coming days.

The technical difference made by officials to put aside the issue contrasts with the strong message issued by EU leaders in late June.

The European Council’s conclusions said that “the EU must respond to all actions of a clear protectionist nature including those calling into question the Common Agricultural policy”.

Despite the fact these tariffs could end up remaining in place, Juncker offered to review all existing tariff measures, including 10% duty imposed on US car exports to the European market, one of Trump’s obsessions.

In addition, he expressed the EU’s willingness to import US liquefied natural gas and soybeans. The latter was a fresh concession that would help Trump and the Republicans in the run-up to mid-term elections in November.

EU officials explained that Europe’s need to import soybeans and the lower prices of US seeds due to Chinese countermeasures against Washington would lead to higher shipments from US, compared with other big exporters (Argentina and Brazil).

In return, Juncker obtained Trump’s commitment not to impose new tariffs on EU cars while both sides are negotiating. “The result is a very good one for Europe,” stressed a Commission spokesperson on Thursday.

But as with the recent restrictions imposed by Washington, Juncker did not succeed in including other European interests.

Access to the US public procurement sector, a demand made by EU leaders in May in Sofia, was not part of the final statement.

“We don’t have many illusions about public procurement… we need to have tactical objectives” and EU official said. According to Commission’s thinking, Europe would have to open up its markets to US agricultural products in order to have access to major works and contracts in the US.

France was not comfortable either with the comprehensive trade talks outlined after the meeting, given the failed experience of the Transatlantic Trade and Investment Partnership.

Despite this broad scope, an EU official insisted that it would not be a TTIP, because the guidelines of the past negotiations are no longer valid.

An Executive Working Group would scope what fields are subject to the negotiation. Member states will approve then new guidelines to frame the Commission’s mandate to negotiate the deepening of the trade relations.

Trump and Juncker said that the agreement represented “a new phase in the relationship between the US and the EU – a phase of close friendship, of strong trade relations in which both of us will win”.

But Trump made no signal of coming closer to EU positions on the numerous issues that broke the Transatlantic bond in recent months, including the Iran deal, the Paris Agreement on climate change or relations with Russia.