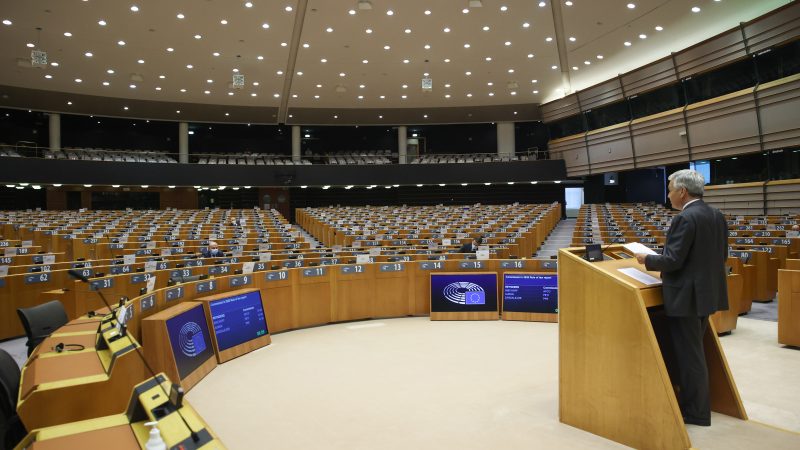 The EU Parliament has unceremoniously adopted a €330 billion spending plan for the 20201-2027 period on Wednesday (23 June). EPA-EFE/ARIS OIKONOMOU / POOL

Structural funds meant to further the cohesion of the EU and convergence of European regions are one of the oldest bloc policies. The €330 billion plan amounts to about one-third of the EU’s seven-year budget.

“These billions for climate protection and regional development must not be allowed to disappear into the pockets of autocrats’ friends,” Greens EU lawmaker Niklas Nienaß told EURACTIV.

He complained that the Council had blocked mandatory improved monitoring tools of how the funds are spent, a blockade that had been sustained during the German EU Council presidency in the second half of 2020.

Nienaß attributed Germany’s unwillingness to mandatorily digitalise the project information to the country’s paper-based bureaucracy, which they fear might get overwhelmed by the burden of having to deal with cohesion projects digitally.

“Cohesion funds are not a gift to EU states” and those who let the money end up in the wrong pockets should be excluded from the funds, warned Dutch EU lawmaker Tom Berendsen (EPP).

Concerns over misuse of funds aside,  EU lawmakers were rather happy with the outcome overall. There were no amendments tabled during the second reading in the EU parliament and all lead EU lawmakers advised their parties to vote in favour.

EU structural funds have never been greener. “The Green Deal is making its way into the regions,” said Nienaß.

30% of the €191 billion heavy European regional development fund is earmarked for climate-friendly investments.

On top of that, an even more impressive 37% of the €43 billion cohesion fund is reserved for climate-friendly investments. In total that means more than €72 billion of EU support for regions is going towards fighting climate change directly.

Aside from the mandatory percentages, the new so-called “do no significant harm”-principle was enshrined in the programmes.

The vast amount of money dedicated to climate change also empowers the EU’s taxonomy, a ruleset on which kinds of investments are considered green. The taxonomy has come under fire recently for not being clear on the role of gas, nuclear, and being too lenient towards biomass projects.

“Interreg has made borders less visible,” said MEP Herbert Dorfmann (EPP), who complained that EU states had done everything they could to starve the fund of money.

Interreg is a policy from 1990 that is meant to support projects situated close to the borders between EU states. The goal is to foster European territorial cooperation.

Examples of what Interreg provides include Czech citizens being able to visit Austrian hospitals with the help of EU funding, or a shared kindergarten at the Belgian-German border.

“For border regions and regions cooperating across borders, the Interreg programme is an indispensable tool that we want to strengthen for the future,” said the lead EU lawmaker on Interreg, Pascal Arimont (EPP).

The fund had €10 billion available in the previous seven-year budget, but its budget will now be reduced to €8 billion.

One response to “EU Parliament passes €330b regional package that fails on spending controls, say critics”