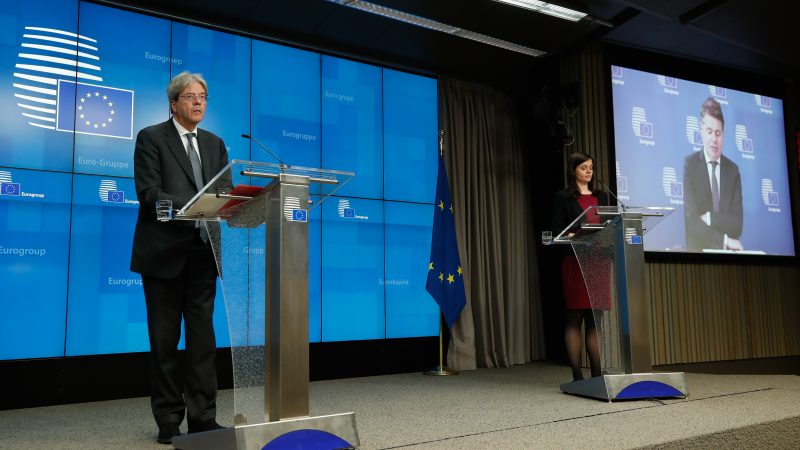 Commissioner for Economy, Paolo Gentiloni, and Eurogroup president, Pascal Donohoe (on the screen) after the Eurogroup videoconference on Friday (16 April).

In 2015, the Commission launched an ambitious plan to bring down barriers among national capital markets, seeking to reduce the over-reliance of European businesses on bank financing.

But progress has been disappointing and Europe continues to lack deep and well-integrated capital markets.

The Commission and member states agreed on an action plan in late 2020 to give a fresh push to the market integration drive.

The action plan aimed at making funding more accessible to European companies and support more long-term equity financing, while making the EU an even safer place for individuals to save and invest long-term.

But “progress has been especially slow in areas governed largely by national laws, such as non-bank insolvency and company law,” McGuinness lamented.

Progress toward a more harmonised framework of national insolvency laws has been highlighted as one of the main outstanding issues by EU officials and experts.

The issue was discussed again on Friday (16 April) by euro area finance minsters (the Eurogroup).

Eurogroup president, Paschal Donohoe, said after the Eurogroup’s videoconference that “well-functioning insolvency frameworks  can make a big difference for the recovery”. He added that finance ministers gave their support for adding “non-legislative measures to help our [insolvency] frameworks]”.

The Eurogroup identified “efficient” insolvency frameworks as an important instrument for facilitating adjustment processes in the region back in 2016.

By speeding-up the process to wind down companies, banks can get rid faster of the bad loans weighing down their balance sheets, improving financial stability.

As the Commission noted in a paper prepared for the Eurogroup on Friday, efficient insolvency frameworks “would be beneficial for the strengthening of the banking union, fostering growth and resilience to asymmetric shocks, while also contributing to building the capital markets union”,

Given their importance, the Eurogroup pointed out in February the need to strengthen the insolvency frameworks, “in order to ensure swift and effective action and minimise economic fallout in the aftermath of the COVID-19 crisis”.

Commissioner for Economy, Paolo Gentiloni, said after the Eurogroup that the EU executive had started the preparatory work “to identify areas were convergence in insolvency rules could give tangible benefits”, without compromising national rules that are working.

In the document circulated to the capitals ahead of the Eurogroup videoconference, the Commission noted that “national insolvency regimes across the EU differ in their design and in their practical implementation” and there is no even a common definition of insolvency.

McGuinness pointed that more harmonised involvency frameworks would not only strengthen financial stability, but also to attract the investment badly needed for the European recovery

“Wide divergence in these areas gets in the way of cross-border investment”, she said, while admitting that “making progress will not be easy.”

She said that these are “politically sensitive areas”, but added that these structural issues are “key for making progress in the medium to long term.”

The EU executive is determined to progress on the capital markets union project because “large, integrated capital markets are essential to deliver our key economic policy objectives”, including building a more resilient economy after the pandemic and completing the twin green and digital transitions.

EU regulators and the insurance sector disagree over whether the review of the rules for the industry (Solvency II) should include higher capital requirements to deal with risks of interest rate changes, which insurers say would mean less money to support recovery.

In addition to the ongoing work on insolvency frameworks, the Commission will review the rules governing the insurance sector (Solvency II framework) to facilitate long-term and equity investments by insurers.

It will propose a single access point to provide investors with seamless access to company information across the EU. The Commission will also review the framework of European long term investments, to spur retail investor especially in green and digital projects.